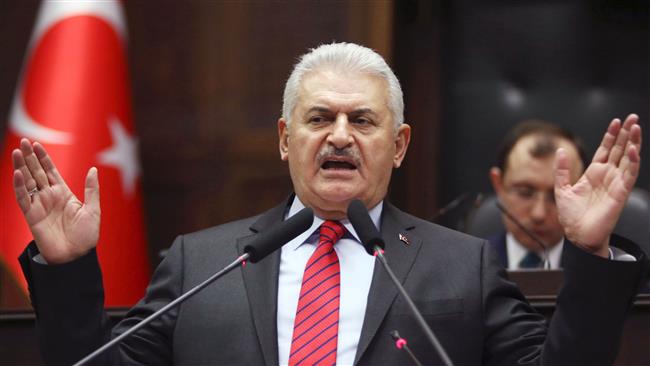 Turkish Prime Minister Binali Yildirim says his country will not plan an attack on the Kurdish-held city of Manbij without the coordination of US and Russia.

“(Without such coordination) there wouldn’t be much of a result and things could get more complicated,” said Yildirim during a televised interview on Monday.

Last week, Turkish President Recep Tayyip Erdogan announced that when Turkey’s forces complete their operations in al-Bab, they will move towards Manbij, which is held by US-backed Kurdish forces. “Now it is time for Manbij, which belongs to the Arabs, not the PYD or YPG,” he said.

Kurdish forces, mainly the Democratic Union Party, also known as the PYD, and its military wing the YPG, liberated the northern Syrian city of Manbij from Daesh last year. They are now currently in control of nearly all of Syria’s entire northern border with Turkey.

After the announcement, Turkish forces seized two Kurdish-held villages located to the east of al-Bab following heavy clashes with the so-called Syrian Democratic Forces (SDF). The SDF is a coalition of Arab fighters and forces from the Kurdish People’s Protection Units (YPG), who are currently in control of nearly all of Syria’s entire northern border with Turkey.

In August 2016, Turkey began a major military intervention in Syria, dubbed “Euphrates Shield,” sending tanks and warplanes across the border. Ankara claimed that its military campaign was aimed at pushing Daesh from Turkey’s border with Syria and stopping the advance of Kurdish forces, but Damascus denounced the operation as a breach of its sovereignty.

US bolstering presence in Manbij

Meanwhile, the Pentagon has announced that it has sent additional US soldiers into northern Syria to deter rival forces in the region from attacking each other instead of Daesh.
Defense Department spokesman Navy Captain Jeff Davis said the additional soldiers had been deployed to Manbij over the past few days.

“We have brought in some additional forces to be able to do this reassurance and deterrence mission,” he said.

“We have made visible actions in deploying US forces as part of the coalition in and around Manbij to reassure and deter – that’s to deter parties from attacking any other parties other than Daesh itself,” he added.

The US has around 500 special operations forces deployed in northern Syria. Their location is usually kept secret.

For nearly six years, Syria has been fighting foreign-sponsored militancy. The UN Special Envoy for Syria Staffan de Mistura estimated in August last year that more than 400,000 people had been killed in the crisis until then. The world body stopped its official casualty count in the war-torn country, citing its inability to verify the figures it received from various sources.