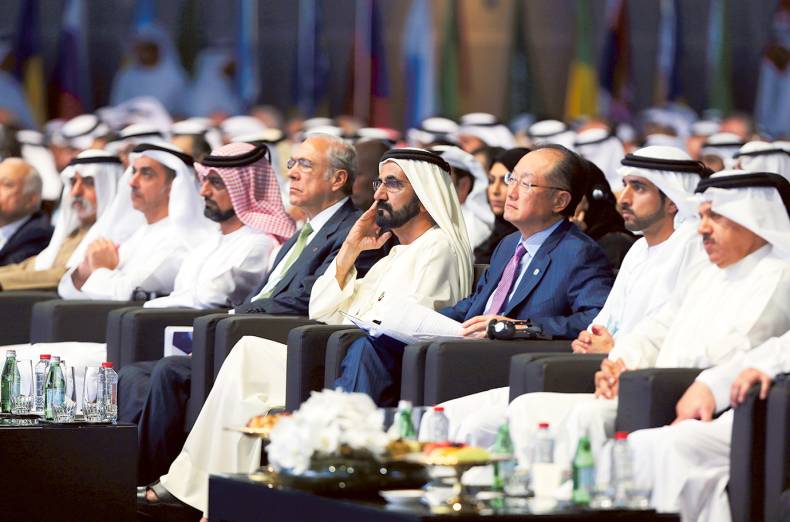 “National independence was a relic of the past”, and that lack of trust in national leadership requires a global institution to handle all our issues. He said; “We need global responses, and global responses need multilateral institutions able to play their role.” – new UN Secretary General  Antonio Guterres

[ Editor’s Note: Oh my, no more lurking in the closet for the top-down one-world government crowd. When do we all get our free Koolaid, so we can be ready for our big space ship ride, which can’t be far off, with such visionaries at the helm, right?

Phil Butler puts his usual laser focus on the elites for us with this excellent report on their recent party in Dubai, a love fest of the rich and powerful, and their eternal blind spot for accepting responsibility for any of their failures. On the contrary, their response is to double down. The proof of that is Mr. Guterres’ shocking statement above.

Has anyone heard of calls for his resignation? No, you haven’t; which shows the world public is also part of the problem. As has happened with the EU, where the extra layers of control freaks between the voters and their political leadership is trending to disempower the voters more and more, way too many seem to have grown accustomed to it.

I refer to this 21st-century social malady as the biggest threat to all of our national security… this surrender attitude, intent on thinking that nibbling around the edges of the problem or rearranging the deck chairs on the Titanic is going to have any real benefit — other than who has the best view of the coming disasters.

As I have said so many times in the past, this will get worse before it gets better. And if and when it finally does, where will be a lot less of us around to enjoy the change… Jim W. Dean ]

The World Government Summit 2017 just wound down in the UAE. Before all was said and done the globalists revealed a stunning agenda of big government, neo-socialist ideals, and even social engineering. The failed and failing institutions we’ve seen destroying our economies, values and millions of people’s lives is audacious as ever. Here’s some short takes from the conference.

When billionaire Elon Musk took the stage in Dubai, the thousands gathered to absorb the greater glory of elites assembled there crooned at his prophesies of humans merging with machines. The engineers of the new liberal empire seek to engineer it all you see. But Elon Musk was the most reasonable and pragmatic of the business leaders assembled, I assure you.

Of course Musk was there seeking funding and PR for his developing technologies, but his ideas on universal incomes and truly “sustainable” projects are stunningly logical, especially compared with other ideals expressed. In contrast, Klaus Schwab, founder and chairman of the World Economic Forum in Davos, told attendees that governments should promote his vision! Yes, Schwab said the world needs a global regulatory regime, and he went on to say:

“The role of governments in shaping the future of their citizens has never been as important as it is today.”

UN Secretary-General Antonio Guterres gave a keynote speech that was chilling in its tone and ultimate meaning. Guterres told delegates; “national independence was a relic of the past”, and that lack of trust in national leadership requires a global institution to handle all our issues.

In a most bizarre moment of the conference, IMF Christine Lagarde heaped praised His Highness Sheikh Mohammed Bin Rashid Al Maktoum for Dubai’s “efforts to thrust the well being and happiness of people at the center of the global debate”.

Isn’t it rich when the world’s richest and most powerful bankers and financiers care so much for the waking world? Excuse my cynicism, but we always knew banks just wanted us to be elated, euphoric, happy beyond measure! Good God. Lagarde had the unmitigated and shameless audacity to pour praise on one of the most repressive regimes in the world:

“The fact that there is willingness to openly discuss even the most difficult issues, and the fact that the well-being and happiness of people is right at the centre of this debate is very good.”

This embattled bean counter embodies the spirit of psychopathic globalists best of all. Lagarde, who narrowly avoided prison time for one committing of the biggest bribes ever, went on to tell the throng in Dubai of this “happiness quotient” being the salvation of the globalist movement.

The same people who beset Europe and the world with constant conflict, they now profess a reboot of neo-liberal promise – Utopia! At ever level, this conference was just all wrong.

Reading and watching the speeches, it’s like viewing a flock of ostriches bury their heads in Arab sands. One example of the scope of idiocy came from Tom Koulopoulos, president and founder of Delphi Group and author of ‘The Gen Z Effect’.

So the globalist suggest the whole world follow a hollow and contrived tendency of the younger generation, in order to build a better and more transparent world! The globalist want to appeal to the biggest consumer/voter group, by suggesting humanity adopt the ideologies of the least experienced.

Finally, the most controversial aspect of this year’s World Government Summit for many was holding the conference in the shadow of a replica of the Roman arch that once stood in front of the pagan Temple of Ba’al at Palmyra.

Israel Breaking News cited on rabbi who claimed that showed a dangerous fusion of Ishmael and Edom against Israel.

While the implications evoke conspiratorial visions, we must wonder at the significance of such symbolism in today’s world, a world where there are unprecedented power moves going on.

The organizers and leadership of this globalist doctrine proclaimed anti-globalisation movements around the world to be “only a phase”. Sultan Bin Sulayem, Chairman of DP World, told summit attendees:

“I believe anti-globalisation sentiments are just a phase, they won’t affect business the way as its being perceived currently.”

Now let me quickly deflate this new world globalism our Dubai experts are evangelizing. Tim Wallace’s report at The Telegraph is the perfect litmus test for globalism versus nationalist of populist ideals. “Have the globalists succeeded in making our world better?”

This, per the Institute of International Finance (IIF), is the reality of the current systems. Christine Lagarde and the others proclaim all this lending is for our Utopian happiness, when in reality the elites are the only ones in Shangri-La.

Governments in mature markets are the biggest borrowers now, with $50 trillion of debts at a time when banks and other financial institutions are cutting debt.

So governments, or the people, are being forced to borrow from banks and other investors. Utopia form the insane globalist asylum.