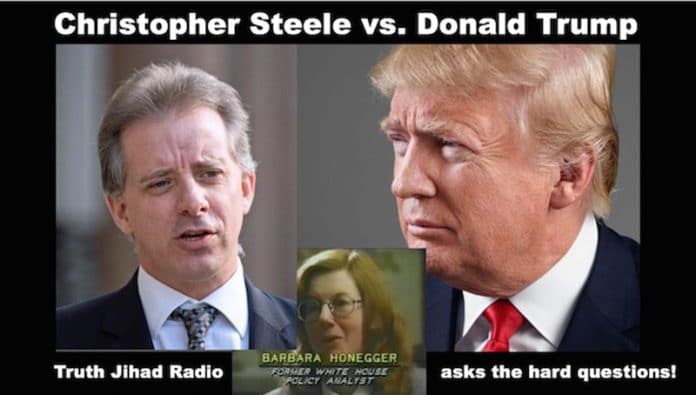 For only $3.95 a month you can listen to shows on-demand before they are broadcast – and also get free downloads and other perks from Kevin! If you are a subscriber, just log in to the members area of TruthJihad.com to get early access to the shows.Help Kevin keep these shows on the air – become a subscriber today! Or if you prefer, PAYPAL a one time donation, or a regular payment, to truthjihad(at)gmail[dot]com.

Barbara Honegger says the Jeff Sessions “lied to Congress” scandal may be the beginning of the end for the Trump Administration. It isn’t that Barbara is unhappy that Trump’s people may have colluded with the Russians to defeat Hillary Clinton; in fact, she is actually glad Clinton lost. Nor are the Russians the bad guys — Barbara admits that it’s the US and NATO, goaded on by the neocon-Zionist psychos, who are the main aggressors. But, she says, the law is the law, perjury is perjury, and subverting an election is illegal, even when done with good intentions.

Barbara Honegger is one of our best-qualified voices on this topic, having broken the October Surprise story detailing how a previous Republican campaign — the Reagan-Bush campaign in 1980 — colluded with elements of the Iranian government to throw the election their way.

Barbara suggests you check out these links:

NY Times on “what does Steve Bannon want?”

Law review article on Gravel v. U.S. and its relevance to 9/11 Truth by the Mick Harrision, Director of Litigation for the Lawyers Committee for 9/11 Truth

Barbara Honegger, MS is a retired Senior Military Affairs Journalist at the Naval Postgraduate School, the Department of Defense’s advanced science, technology and national security affairs university. She is a graduate of the Naval War College master’s program in National Security Decision Making (2001), and a former White House Policy Analyst and Special Assistant to the Assistant to President Ronald Reagan (1981 – 1983).
Barbara is former Director of the Attorney General’s Anti-Discrimination Law Review, U.S. Department of Justice (1982 – 1983). She is the author of the pioneering Irangate expose October Surprise (1989) and of the chapter “The Pentagon Attack Papers” included in The Terror Conspiracy: Deception, 9/11 and the Loss of Liberty by Jim Marrs (2006). She is also author of The Scarlet A: Links between the Anthrax Attacks and 9/11. The video of her presentation 9/11 Pentagon Attack: Behind the Smoke Curtain is a major contribution to 9/11 research.
[powerpress_playlist]