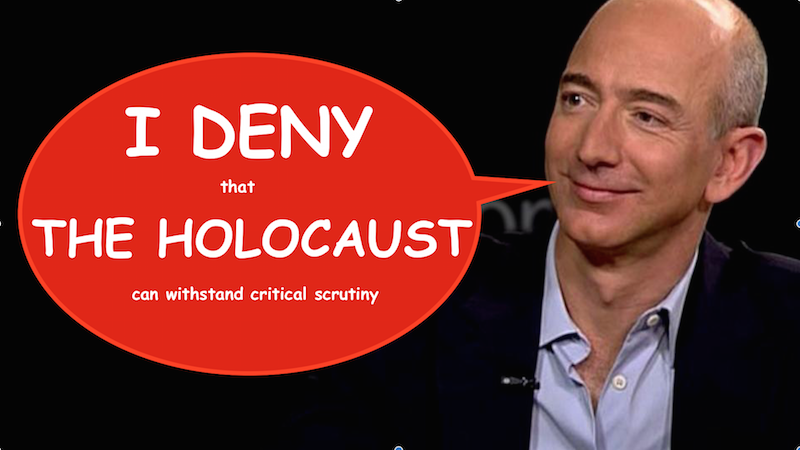 In what amounts to a ringing endorsement of the claims of Holocaust revisionists, Amazon.com has apparently concluded that their books cannot be effectively refuted – and therefore must be banned.

M.S. King, author of The Bad War, has been notified that his book has been banned  from Amazon. The explanation:

We’re contacting you regarding the following book: The Bad War: The Truth NEVER Taught About World War II. During our review process, we found that this content is in violation of our content guidelines. As a result, we cannot offer this book for sale.

Amazon did not explain precisely which guidelines had been violated, nor did it cite specific passages. Therefore the “violations” claim is an obvious lie. The real reason King’s book and others were banned is that Jewish-Zionist pressure groups have mounted a campaign (timed to accompany the “cemetery desecration” PR stunt?) aimed at making Holocaust revisionism books unavailable. Obviously they believe the revisionists’ claims are irrefutable — and have convinced Amazon that such is the case.

Are the same people who are knocking over headstones in cemeteries also pressuring Amazon to remove holocaust revisionism books? That would certainly fit their standard “problem-reaction-solution” methodology.

After MS King emailed me about the suppression of his book, I searched Amazon to see if the handful of holocaust revisionism titles I’m familiar with were still there. (Disclaimer: I have only read a few books on this subject and am not a revisionist, just an open-minded truth-seeker and defender of freedom of inquiry.)

So which books have been taken down?

Thomas Dalton’s Debating the Holocaust: A New Look at Both Sides is by far the best book I have read on the Holocaust controversy. It is thorough, precise, well-documented, and lays out a convincing prima facia case that holocaust revisionism needs to be taken seriously. Scholarly, dispassionate, and utterly lacking in anything that could remotely be called “hate” or bigotry, Debating the Holocaust is no longer available on Amazon. And that is an outrage.

Nick Kollerstrom’s Breaking the Spell is also missing in action from Amazon.com. A History of Science Ph.D. with a specialty in chemistry, Dr. Kollerstrom was summarily fired, with no reason given, from University College of London after he published a scholarly article critiquing the evidence for mass execution cyanide gas chambers in the Nazi camps. His book Breaking the Spell lays out his conclusions — including his explanation of how the rumor of mass gassings was initiated by British war propagandists in 1942, then snowballed as the Nazis applied copious amounts of Zyklon-B in minature “gas chambers” to the clothing and bedding of inmates to kill lice and stem that summer’s typhus outbreak.

So now Kollerstrom has not only been fired for voicing heretical views, but he can’t even offer them in book form to the mass reading public. 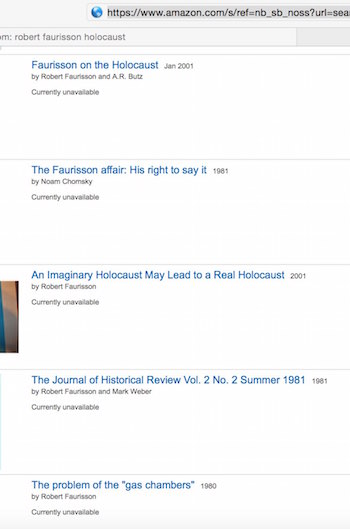 Another revisionist I’ve read, though not extensively, is Dr. Robert Faurisson. A convert to Islam, Faurisson is wildly popular in Morocco, where his books were recommended to me by academic colleagues there during my year of Fulbright-sponsored Ph.D. research in 1999-2000.

Has Faurisson’s Amazon catalogue been tampered with? I can’t tell; but there certainly is a shocking paucity of affordable Faurisson offerings there. The only volume  of his available for less than $40 is the 1981 Journal of Historical Review v.2 n.4 he co-edited with Phillip Beck. The bulk of his work is “currently unavailable.”

How about Germar Rudolf, who (like Faurisson) has actually been imprisoned for his scholarly efforts on this controversial subject? I’m not really familiar with his work, but I understand that he is considered one of the most serious scholars in the revisionism field. Are his books still on Amazon? Apparently they are. But for how long?

Update: Rudolf’s books are in fact being removed – see below

Another very strong pro-holocaust-revisionism voice still up on Amazon is Gerard Menuhin, whose Tell the Truth and Shame the Devil is now selling for $90. It’s a passionate, eye-opening book, capable of upsetting mainstream readers’ preconceptions about a whole range of issues.

Listen to my radio interview with Gerard Menuhin.

And how about David Irving, who is considered a revisionist by Hollywood but not by most actual revisionists? Irving’s supposed masterpiece, Hitler’s War, is still available — for $80. (Apparently there is a market for these disreputable and dangerous books.)

The above list covers the “revisionists” I know anything about.

How about those who argue against them?

Michael Shermer and Alex Grobman’s Denying History: Who Says the Holocaust Never Happened and Why Do They Say It? is available for less than five dollars. Unfortunately for anyone who cares about rational arguments and empirical evidence, Denying History is clearly inferior to Thomas Dalton’s Debating the Holocaust, which is no longer available on Amazon at any price.

Deborah Lipstadt’s Denying the Holocaust: The Growing Assault on Truth and Memory, possibly the best-known anti-revisionism book, is also the most shockingly vapid. Lipstadt makes little effort to argue her case on its merits, but instead spends virtually the entire 304 pages lobbing hysterical ad-hominem arguments. The only sane reaction to Lipstadt’s unbelievably lame volume is: “If this is the best the anti-revisionists can do, no wonder they have to try to get revisionists’ books banned!” You can get a used copy for less than two dollars and fifty cents.

So here is the takeaway:

Attention, Amazon shoppers! You can still buy bad and mediocre books arguing that holocaust revisionists are wrong — but you are not permitted to buy better books (including at least one very good book, Dalton’s Debating the Holocaust) that might lead you to the opposite conclusion.

Update: This just in from Germar Rudolph (who also published his own blog post “Amazon Mass-Bans Dissident Materials:   Hundreds of Titles Erased within a Day”)

In your latest article, which I read with interest and gratitude, you write about a handful of revisionist books. Well, what an understatement. While Castle Hill Publishers might be the biggest fish in the revisionist teapot, we’re by far not the only ones publishing books in that field. But from our program alone, the following 68 titles were banned on March 6. Use the links provided to see for yourself.

Interestingly, if you look at the list of banned books, you might be astonished to find among them books which aren’t even dealing with “the Holocaust” as such:

The first two deal with Jewish emigration from the Third Reich prior to the war. It is based on mainstream sources and does not touch upon the extermination issue. The third deals with Jewish fundraising campaigns during and after the FIRST World War, and does therefore already for chronological reason not deal with the Jewish Holocaust of the SECOND World War. The last two books are highly esoteric studies of the organization, responsibilities and activities of the Central Construction Office at Auschwitz, which was in charge of building and maintaining the camp’s infrastructure. It is based on original wartime archival material and is not dealing with extermination claims of Auschwitz at all. The book has even been cited as a source by mainstream historians.

The sweeping mass ban enforced within hours, and the senseless aimlessness and random nature with which it was implemented, clearly show that these books were not pulled because their content was checked and found impermissible, but because someone (probably Yad Vashem) had sent them a list of items to ban, and Amazon simply complied by checking off all the items on that list.