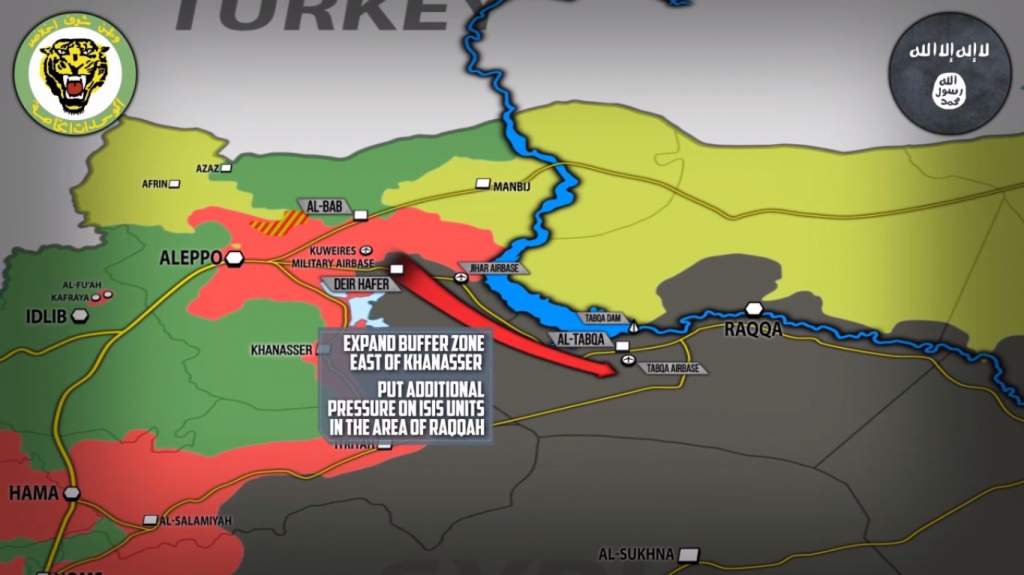 The Syrian Army’s Tiger Forces, supported by the Syrian and Russian air forces, have continued making impressive gains against the ISIS terrorist group in the province of Aleppo.

The Tiger Forces further advanced along the Euphrates River and entered the Jirah Airbase.

Now, when the ISIS-held town of Dier Hafer is de-facto cut-off from the rest of the ISIS-held area in central Syria, its liberation will become the main short-term goal of government forces.

Experts believe that after Deir Hafer government forces will likely advance along the Deir Hafer-al-Tabaqah road, expanding the buffer zone east of Khanasser and putting additional pressure on ISIS units operating in the area of Raqqah.

The hidden Russian-US cooperation in Syria was already proven with the Manbij case when Moscow and Washington acted together in order to prevent the Turkish army and pro-Turkish militant groups from attacking Kurdish forces in the area.

There is a chance that the US and Russia will act jointly in order to retake the ISIS self-proclaimed capital of Raqqah even if this is not promoted openly in the mainstream media. If government forces reach al-Tabqa, they will isolate Raqqah from the southern flank and US-backed forces will be able to avoid the need to cut across the Euphrates River in the area. In this case, the fall of Raqqah will take place much faster then it’s expected by experts.

Meanwhile, the Pentagon is preparing to expand the military force deployed to Syria. The US military is expanding the Kobani Airport runway in order to be able to receive large transport aircraft, the Basnews agency, based in the capital of the Kurdistan Region of Iraq, reported on Monday, citing a source in the US-backed Syrian Democratic Forces (SDF).

“The source explained that “the airport runway in the past was 1,100 meters long with the width of 60 meters, and it is expected to be expanded to 1,700 meters long and 110 meters wide,” adding that a four-meter-tall wall will also be erected around the airport,” the article reads.

The Kurdish People’s Protection Units, which are the core of the SDF, have been allegedly discharged from protecting the area. The airport is now guarded by US troops.

The intensification of the operation to retake Raqqah will push Washington to increase its military presence in Syria, deploying more troops, artillery pieces and other military equipment. These forces will likely be redeployed from Iraq after the end of the anti-ISIS operation in the western part of Mosul.