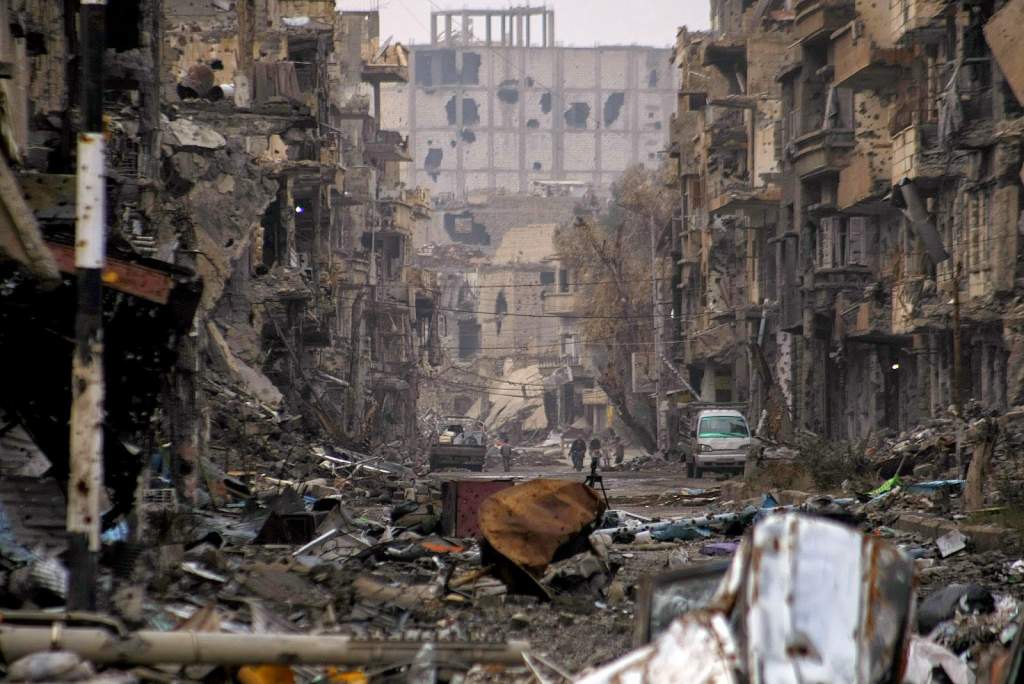 [ Editor’s Note: The ceasefire that is holding and the intra-jihadi fighting in Idlib has given the SAA time to clear some of its flank pressure. When I was in Damascus as an election monitor in 2014, I remember working on an article in the Dama Rose hotel business office one night with the widow open for the cool breeze; I could hear the shelling on the outskirts of the city.

While Damascus was making progress clearing the suburbs, ISIS retook Palmyra and the badly needed oil and gas fields there; and those were some of its last ditch efforts to gain some initiative. The men and equipment ISIS lost there will not be available for the final Deir-Ezzor fight, which has been delayed, while easier logistical fronts are being dealt with.

I had anticipated more of an advance east after Palmyra was retaken, to try to catch the retreating jihadis on the roads and run them all the way back to Deir Ezzor, but the strategy seems to have been to concentrate on clearing Palmyra’s flanks and to get the energy fields producing again.

The Kurds seem to be doing very well moving on Raqqa, with its encirclement north of the Euphrates almost complete. We see hints of an understanding as to who is going to fight where, so the SAA can continue to clear more of the Central area in Hama province to establish better access through the center of the country, and to begin bringing back the refugees to begin rebuilding.

Reserves are being trained to help with the growing garrison work that will be needed to secure all the recent gains. It will be a great day when the siege of the Syrian troops in Deir Ezzor is broken. They have had a long hard fight, and will be ready for a break from living under the threat of being overwhelmed and executed by ISIS, the usual fate of their prisoners… Jim W Dean ]

Syrian troops, backed up by the country’s air force, heavy struck positions of terrorists of the Islamic State group, stationed in Deir ez-Zor and its surrounding areas, in order to break their siege of the city’s airport.

IS positions and gatherings in Sorieh Juneid, al-Mohandesin, al-Ma’amel, Tal-e Maqaber, the Electricity company, Hill 17, surrounding areas of the al-Maqaber cemetery, Lawa al-Tamin and the Deir ez-Zor airport, as well as on the al-Thardah mountains, were pounded by Syrian fighter jets. As a result, terrorists suffered heavy losses.

At the same time, the Syrian Air Force also hit terrorists’ positions in al-Ma’amel region in Deir ez-Zor city, the villages of al-Hosseynieh and Hatleh, located in the eastern part of Aleppo, as well as Ayash village to the west, and northern and eastern parts of the airport. A number of terrorists were killed and wounded in the airstrikes.

Meanwhile, missile and artillery units of the Syrian Army targeted positions of IS terrorists, stationed in al-Thardah region, the Sanouf heights and surrounding areas of the cemetery. As a result, several terrorists were killed, while their military vehicles were destroyed.

On Wednesday, the Syrian Armed Forces continued their military operation, aimed to break the siege of the Deir ez-Zor airbase. Syrian troops, backed up by the country’s air power, struck IS positions in al-Thardah, Talat al-Sanouf and al-Maqaber regions, as well as on Hill 17, killing and wounding dozens of IS terrorists and destroying their several military vehicles, equipped with machine guns.

At the same time, the Syrian Air Force carried out airstrikes on terrorists’ positions in the areas of al-Arazi, al-Arafi, al-Hamidiyeh and the power department near al-Ta’min brigade. Several IS militants were killed and wounded.

On Tuesday, Syrian troops launched a new series of attacks on IS positions in the southern outskirts of Deir ez-Zor city in order to raise the siege of the city’s military airport. In addition, the Syrian Army also intensified its offensive on defense lines of IS terrorists in the area of the al-Maqaber cemetery, located in the southern outskirts of Deir ez-Zor. As a result, a number of terrorists were killed and wounded.