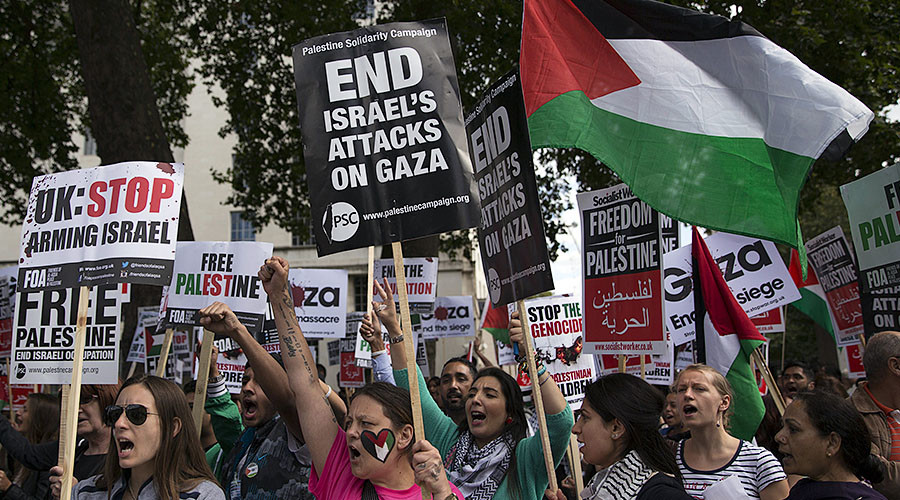 A fake anti-semitism campaign masterminded by the usual Zio suspects, their Israel lobby colleagues and their stooges in the corridors of power, continues to sweep across UK universities… and our political parties, especially shambolic and rudderless Labour.

The University of Central Lancashire cancelled an event due to be held last month entitled “Debunking Misconceptions on Palestine and the Importance of Boycott Divestment and Sanctions” organised by the University’s Friends of Palestine Society. The University said it would contravene the International Holocaust Remembrance Alliance’s new definition of what constitutes anti-semitism and would therefore be unlawful. The event went ahead, off campus, at the premises of a local voluntary organisation.

Exeter University banned students from staging a re-enactment called Mock Checkpoint, in which some dressed up as Israeli occupation soldiers while others acted the part of Palestinians trying to go about their daily lives. The event was approved by the students’ guild but banned for “safety and security reasons” less than 48 hours before it was due to take place. An appeal was rejected.

At Leeds former British ambassador Craig Murray was asked by the trustees of the University Union to provide details of what he was going to say in his talk “Palestine/Israel: A Unitary Secular State or a Bantustan Solution” just 24 hours before he was due to speak. Craig reluctantly gave them an outline to allow the lecture to go ahead. He writes in his blog: “I have just been told by Leeds University Union I will not be allowed to speak unless I submit what I am going to say for pre-vetting.

“I am truly appalled that such a gross restriction on freedom of speech should be imposed anywhere, let alone in a university where intellectual debate is meant to be an essential part of the learning experience. I really do not recognise today’s United Kingdom as the same society I grew up in. The common understanding that the values of a liberal democracy are the foundation of society appears to have evaporated.”

Also at Leeds the student Palestine Solidarity Group was refused permission to mount a visual demonstration outside the Leeds Student Union Building or to have a stall inside.

At Liverpool Professor Michael Lavalette was contacted the day before he was due to speak with a demand that he sign the University’s ‘risk assessment’ for the event. This included reading the controversial IHRA definition of anti-semitism and agreeing with it.  He emailed his response in which he carefully avoided mention of the dodgy definition and the meeting went ahead.

The University of Manchester allowed a series of talks marking Israeli Apartheid Week (IAW) to go ahead, but only after several meetings and imposing strict conditions which the organisers called “unheard of…. other societies and groups do not face the same problems.” University authorities however vetoed the students’ choice of academic to chair an IAW event on BDS over concerns about her “neutrality”, and other speakers had to acknowledge the British government-endorsed definition of anti-semitism.

Meanwhile some reports say that a conference with the title “International Law and the State of Israel: Legitimacy, Responsibility and Exceptionalism” to be held at University College Cork at the end of this month has been cancelled thanks to pressure from Zionist groups. StandWithUs Israel, in cahoots with Irish4Israel, claim the University has been persuaded to impose added security stipulations and other limitations that “amount to a de-facto cancelling of this hateful event”. But these are desperation tactics. Checking with the organisers I’m told the event is “100% going ahead”. The Irish, it seems, are not as easily pushed around as the English. The conference, if you remember, was chased away from Southampton University two years ago by a similar campaign against free speech. The ‘official’ reason, as usual, was security concerns.

Now comes the scandal of the 26 year-old Exeter student, noted for her work on anti-racism, being smeared by the Zionist Inquisition for her Pro-Palestinian activism.

She is accused of having tweeted two years ago: “If terrorism means protecting and defending my land, I am so proud to be called terrorist”. So what? As everyone and his dog knows, or ought to know, the Palestinians are perfectly entitled, under international law, to take up arms and resist a brutal illegal occupier. As Malaka Mohammed herself says: “It may appear as a radical statement that could raise serious concerns at both the University of Exeter and its Students’ Guild. However, it is my honest belief, and as I will attempt to explain, these kind of statements by Palestinians in general, and me in this instance, are most commonly in response to efforts by Israel advocacy groups and the Israeli government to demonize and dehumanize Palestinians. This is done by using the emotive dog whistle by Israeli descriptors of ‘terrorist’ and ‘terrorism’ whenever referring to the ‘Arab’ population. Palestinians who throw stones in response to Israeli soldiers invading their villages are labelled violent thugs, rioters and terrorists. Palestinians who non-violently protest the illegal occupation are portrayed as violent individuals who terrorize Israeli Jews. Practically any Palestinian who resists the Israeli occupation and its plethora of human rights violations, war crimes and serious violations of international humanitarian and human rights law is stigmatized in this way.”

After reading that, I dropped the Vice-Chancellor a line:

I’m writing as a graduate of Exeter University with fond memories of the place, and because I’m shocked to see its good name besmirched by ludicrous accusations linking Palestinian PhD student Malaka Mohammed (aka Shwaikh) to anti-semitism and supporting terrorism.

As an acknowledged international relations specialist you will know the score regarding Israel’s decades-long illegal occupation of the Palestinians’ homeland and its brutal subjugation and merciless dispossession of the Palestinian people. You will also, I imagine, understand who the true terrorists and anti-semites are.

Lest we forget, the US defines terrorism as an activity that

(i) involves a violent act or an act dangerous to human life, property, or infrastructure; and

(ii) appears to be intended

– to intimidate or coerce a civilian population;

– to influence the policy of a government by intimidation or coercion; or

– to affect the conduct of a government by mass destruction, assassination, kidnapping, or hostage-taking.

And the US has used this definition to terrorise and degrade individuals, groups and countries it doesn’t happen to like.

Ironically it’s a definition that fits the US administration itself – and the thuggish Israeli regime –  like a glove.

I sincerely hope that amidst the flurry of investigations going on you will take steps to ensure that plucky Ms Mohammed/Schwaikh ceases to be victimised by tiresome Zionist Inquisitors and is allowed to get on with her studies, and from now on free speech prevails across the beautiful Exeter campus.

Sir Steve is said to earn £400,000 a year according to this report. Perhaps he and many other university bosses need rousing from their plumptious comfort zone.

I’m with Craig Murray on this. I too don’t recognise our society today as the same one I grew up in. Who had the impudence to change our values regarding free speech?