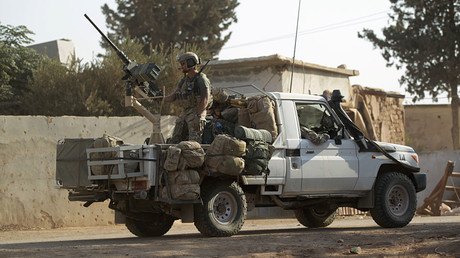 Any foreign forces, including those from the US, that enter Syria without invitation are invaders, Syrian President Bashar Assad told Chinese media in an interview, noting that no one had given the US troops currently in Manbij permission to be there.

“Any foreign troops coming to Syria without our invitation or consultation or permission, they are invaders, whether they are American, Turkish, or any other one,” Assad told Chinese PHOENIX TV, as cited by the Syrian state-run SANA news agency.

When a journalist asked the Syrian president if Damascus had “opened doors” for American troops in Aleppo province’s city of Manbij, Assad said “No, we didn’t.”

“What are they [foreign troops] going to do? To fight ISIS [Islamic State, formerly ISIL]? The Americans lost nearly every war. They lost in Iraq, they had to withdraw at the end. Even in Somalia, let alone Vietnam in the past and Afghanistan.”

According to Assad, the US “didn’t succeed anywhere they sent troops, they only create a mess; they are very good in creating problems and destroying, but they are very bad in finding solutions.”

The Pentagon confirmed earlier in March that US troops had been sent to Manbij to prevent conflict between US-backed Kurdish forces and rebels backed by Turkey.

Without foreign intervention, the Syrian war “will take a few months” to bring to an end, Assad noted.

“The complexity of this war is the foreign intervention. This is the problem,” he said.

American troops were first spotted in the town earlier in March. Reports emerged at the time claiming that a deal had been struck for the US-backed Syrian Democratic Forces (SDF) to hand over some 20 villages in a zone between Manbij and Al-Bab, which had been recently taken by Turkish-backed forces, to the Syrian government.

“They [Syrian forces] are certainly aware of where we [US] are, and we are aware of where they are. There is no intention between the two of there being any conflict against any party other than ISIS,” Pentagon spokesman Captain Jeff Davis told reporters.

On Thursday, the US-led coalition confirmed that around 400 American marines and army rangers had arrived in Syria to establish an outpost to support an operation to take the city of Raqqa. The new contingent adds to the 500 US troops already in Syria. US Air Force Colonel John Dorrian, the coalition’s spokesman, says the new soldiers have been deployed to expedite the defeat of the terrorists in Raqqa.