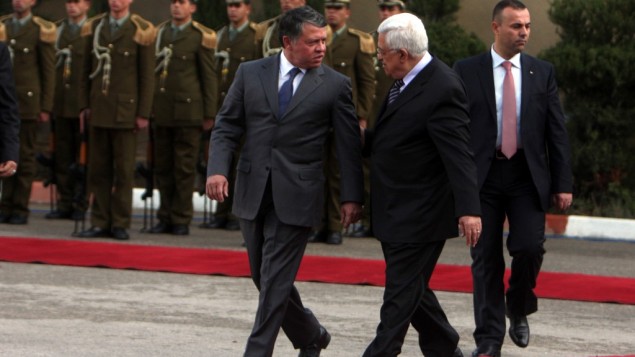 Palestinian Authority President Mahmoud Abbas spoke Saturday with Jordan’s King Abdullah II to brief him a day after his first conversation with US President Donald Trump, saying that the US leader has a commitment to an “authentic” peace process.

Abbas’s conversation with Abdullah, who plays a key role in the region, was their second in just 24 hours, according to the official Palestinian news agency Wafa.

Abbas briefed the Jordanian monarch “particularly the part about the two-state solution and Trump’s commitment to an authentic peace process,” Wafa said.

Abbas and Abdullah also spoke about the upcoming Arab summit scheduled for the end of this month in the Jordanian capital, Amman, and Arab efforts to unify their ranks and support the Palestinian cause, Wafa said.

Ahead of the conversation with Trump, the PA president spoke to Abdullah to coordinate stances on the peace process.

On Friday, Trump and Abbas had their first conversation since the US president took office in January and Abbas received an invite to the White House.

The phone call between the two ended nearly two months of what Palestinian officials said had been near-total silence between Ramallah and the new administration.

“The president emphasized his personal belief that peace is possible and that the time has come to make a deal,” the White House said. “The president noted that such a deal would not only give Israelis and Palestinians the peace and security they deserve, but that it would reverberate positively throughout the region and the world.”

During the conversation, which lasted some 10 minutes, the US president invited Abbas “to visit the White House soon to discuss ways to resume the [Palestinian-Israeli] political process,” Wafa quoted Abbas’s spokesman as saying.

The spokesman, Nabil Abu Rudeineh, said that Trump stressed his “commitment to a peace process that would lead to a real peace between Palestinians and Israelis”, Wafa reported.

Abbas told Trump that peace was a “strategic choice” for the Palestinian people, which should lead to the “establishment of a Palestinian state alongside Israel.”

The report made no mention of the two-state solution, which the Trump administration appeared to distance itself from last month ahead of Trump’s meeting with Israeli Prime Minister Benjamin Netanyahu.

At a joint press conference with Netanyahu on February 15, Trump said: “I’m looking at two-state and one-state, and I like the one that both parties like.”

Rudeineh went on to add that “President Trump is a very honest man, very courageous man, looking for a deal, a just deal.”

The two leaders did not discuss the issue of moving the US embassy from Tel Aviv to Jerusalem.

The conversation came days before Jason Greenblatt, Trump’s special envoy to the Israeli-Palestinian peace process, is expected to sit with Abbas and Netanyahu in separate meetings during his first visit to the region in that role.

Since taking office on January 20, Trump has spoken by phone with Netanyahu twice and hosted him at the White House, reflecting what many say is the administration’s slant toward Israel.

Unnamed officials said last month that CIA chief Mike Pompeo paid a secret visit to Ramallah, and there have been reports of lower level contacts between officials in Washington and Ramallah.