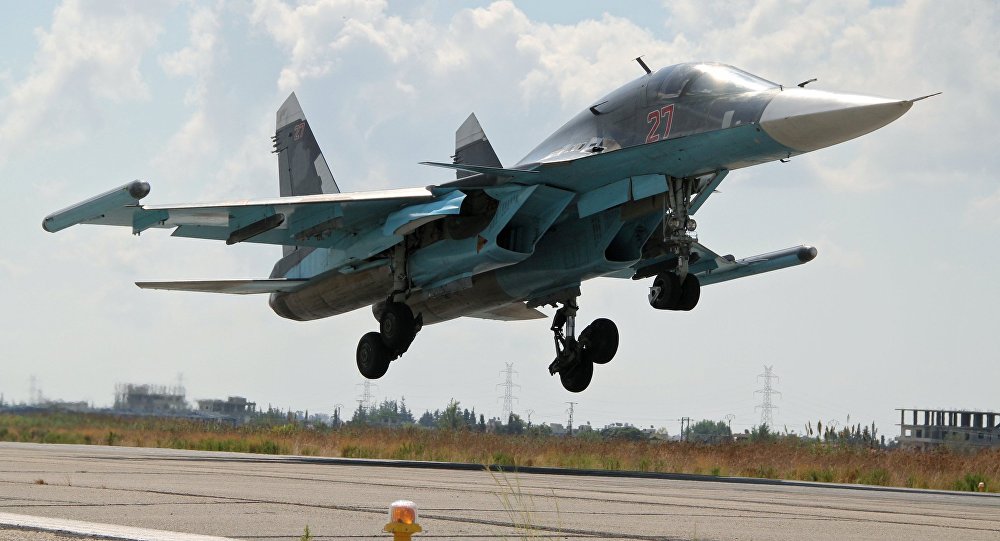 [ Editor’s Note: We had known this squadron masking radar was in the works, but did not know what stage of development it was at. But we learn the Russians once again give very high priority to getting the best bang for their ruble on defense with this new air squadron masking system.

They have to because their economy is vastly smaller than its NATO adversary, despite its continued attempts to paint Moscow as an aggressive threat – a total hoax on the scale of the Iran nuclear weapons program hoax.

We have watched how Russia has upgraded older planes, but not to state of the art, as that can’t be done on old air frames. But we see today that by having one or two of these new S-34s, it can mask a squadron of attack planes that don’t have it, while penetrating defenses. A US contractor would never propose such a cost-effective measure, wanting every plane loaded with everything, and with as complicated and expensive operational and maintenance costs as possible.

As I have stated many times in my Military Editor’s Notes, whoever has the best electronic warfare in the next big war will probably win… if it does not go nuclear. Russia has a lot of focus on this area as it was a do or die task for them, since NATO’s airforce is huge by comparison; and the winner of an attrition battle would be the larger force.

That said, I would assume that the US has the same capability. So the next rung up on electronic warfare is how to neutralize an enemy’s masking capability, and more of those open-ended contracts go out for that effort in an endless cycle… Jim W. Dean ]

An upgraded version of Russia’s Su-34 fighter bomber will be equipped with a sophisticated electronic countermeasures system that will allow one such warplane to protect a squadron of other strike fighters from enemy radar, Russian military expert Viktor Murakhovsky told Sputnik.

In an interview with Sputnik, Russian military expert and chief editor of the magazine Arsenal Otechestva Viktor Murakhovsky, touted the Tarantul aircraft electronic countermeasures system, which he said will help the Russia’s Su-34 strike fighter to effectively protect other strike fighters from enemy radar.

Installed on the wingtips of Su-34s, the Khibiny system provides the jets with electronic warfare capabilities and enables them to carry out effective electronic countermeasures against radar systems, anti-aircraft missile systems and airborne early warning and control aircraft.

“The [Khibiny] system is quite effective, but for the time being it mainly provides  individual protection for the [Su-34] aircraft,” Murakhovsky said, adding that KRET is finalizing the development of an aircraft electronic countermeasures system capable of providing group protection.

Separately, Murakhovsky referred to another such system, which is being developed by the Kaluga Radio Engineering Research Institute outside Moscow.

“After that, the modernized Su-34 fighter bombers will enter service with the Russian Aerospace Forces; they will effectively appear in our VCS, which will effectively provide radio electronic protection to the other warplanes of a strike group,” he said.

Earlier this week, Russian Deputy Defense Minister Yury Borisov said that Russia’s Aerospace Forces will get 16 new Su-34 fighter bombers before the end of 2017, while the modernization of the aircraft will start in 2018.

According to the deputy defense minister, the Novosibirsk Aircraft Production Association has a long-term contract with the Russian Defense Ministry for the production of a total of 92 Su-34 strike fighters.

Borisov stressed that Su-34 aircraft have proved highly effective in the fight against terrorists in Syria.

In particular, it is worth mentioning that during the Syrian campaign, the Su-34 made effective use of its onboard arsenal of a 30 mm cannon, air-to-air and air-to-surface missiles and KAB-500S laser-guided bombs, allowing it to destroy terrorist infrastructure facilities and command centers.

The Russian Defense Ministry now wants to add to this from its impressive arsenal of anti-ship missiles, such as the modified Kh-35 missile and even plans to adapt the Su-34 to launch a new generation of so-called aeroballistic missiles.