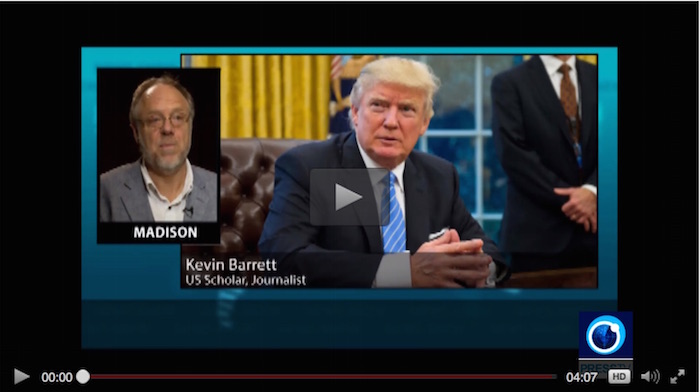 US President Donald Trump himself is very much a product of the ugliest forces in the deep state – a loosely organized cabal who has taken power away from the official government, according to American scholar and VT Editor Dr. Kevin Barrett.

The term deep state, or derin devlet in Turkish, originated in 1950s Turkey, refers to a secretive network of influential members of government agencies or the military that operates outside the democratic system.

Dr. Barrett, a founding member of the Scientific Panel for the Investigation of 9/11 and founding member of Truth Jihad, told Press TV that “Spicer has officially announced that the deep state exists. So this is a kind of a milestone in American history.”

“The term deep state has been almost been as unknown as terms like false flag, which is another term that is now going viral, and is being used by the mainstream media as everybody knows what it means,” he stated.

“The term deep state refers to very politically powerful people who essentially operate off the radar and behind the scenes, generally ignoring, flouting and breaking the law as they do so,” the analyst explained.

“Peter Dale Scott, professor from the University of California, is probably the researcher who has done the most to popularize this term, the deep state.  And he came to this whole concept out of his analysis of the assassination of President John F. Kennedy,” Dr. Barrett said.

“Now today mainstream journalists and historians like David Talbot and others accept that President John F. Kennedy was not murdered by a lone nut, namely Lee Harvey Oswald, but was instead overthrown in a coup d’etat by elements of the American deep state, including former CIA director Allan Dulles, the focus of Talbot’s book [The Devil’s Chessboard: Allen Dulles, the CIA, and the Rise of America’s Secret Government], and James Jesus Angleton, the counter-intelligence chief who was a liaison between the Israeli Mossad and the CIA, as well as elements of organized crime that regularly work with these elements of the CIA,” he stated.

“So it was kind of a multinational intelligence operation with a major level of Israeli participation as Michael Collins Piper explains in his book, Final Judgment[:The Missing Link in the JFK Assassination Conspiracy],” he stated.

“Peter Dale Scott doesn’t go all the way with the Israeli angle, but he coined the term, deep state, based on his research into the JFK assassination, and then later the September 11 coup d’etat in which essentially the same types of elements of the US-Israeli deep state blew up the World Trade Center with explosives, and staged a non-existent hijacking, rather than the (alleged) suicide hijackings — in fact there were no Arab hijackers on the planes – another gross deception like the Kennedy assassination…or we should say  assassinations to include the killing of Bobby Kennedy as well in 1968 — again, killed by the CIA and Israeli linked people tied to organized crime,” the analyst noted.

“So these are the kinds of issues that come up in the study of deep state. And it is very interesting that today we have a president, Donald Trump, who has one of his lead advisers – the political dirty tricks operator Roger Stone, who has written a book [The Man Who Killed Kennedy: The Case Against LBJ] about how Lyndon B. Johnson was part of the killing of his predecessor John F. Kennedy,” he said.

“And now we have Sean Spicer basically admitting to the world that deep state exists. Spicer hasn’t gone all the way with this and admitted that the deep state blew up the Twin Towers to drag us into these wars for Israel that followed. But instead he is sort of trying to point fingers at Obama and his people as tied to the deep state. Now that’s a very superficial analysis,” Dr. Barrett pointed out.

“In fact Donald Trump himself is very much a product of the very worst and ugliest forces in the deep state,” the commentator said.

“Donald Trump was created by Roy Cohn, the mafia boss who owned the corrupt judges and cops of New York, and who was the direct liaison between J. Edgar Hoover and American media, and who organized a pedophile blackmail operation for the CIA. Roy Cohn is the key player in that. And Roy Cohn is the man who made Donald Trump,” he argued.

“So perhaps Sean Spicer should reveal a lot more about the deep state, including the ties of the worst elements of deep state to his boss, President Trump, than he is so far willing to talk about,” the scholar said in his concluding remarks.