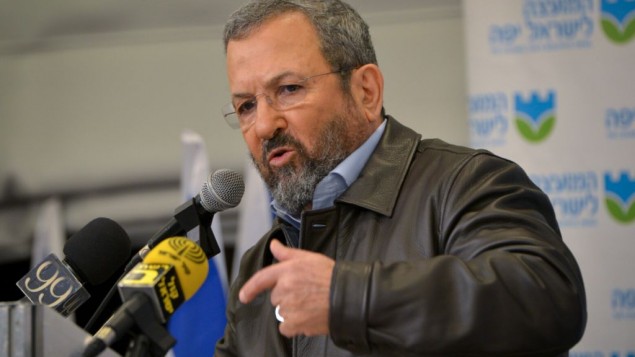 Former Israeli prime minister Ehud Barak attends a press conference organized by the Israeli Labor Party, in Tel Aviv on January 29, 2017. (Flash90)
Former prime minister Ehud Barak cautioned against taking American President Donald Trump at his word Monday, as the US administration’s special envoy was set to land in the country for the first time.

Barak, whose frequent media appearances have fueled rumors of a political comeback, accused Trump of being a wildcard, warning officials they shouldn’t rely on his statements.

“He is very unpredictable… and I would not take the risk of trying to estimate what stance he’ll ultimately take,” Barak told Army Radio.

However, Barak added that Prime Minister Benjamin Netanyahu should take note of Trump’s interest in reaching the “ultimate deal” between Israelis and Palestinians.

The former prime minister pointed out that the US president went off script during his joint press conference with Netanyahu last month to look the prime minister in the eye and say a peace deal was very important to him.

Also Monday, Trump’s envoy Jason Greenblatt was set to arrive in the region for meetings with Israeli and Palestinian leaders aimed at jump starting peace efforts.

Barak, who served as defense minister under Netanyahu before leaving politics in 2013, also recommended against publicly pressuring Russian President Vladimir Putin on the issue of Iran, where Israel’s interests seem to diverge from those of the Kremlin. “We don’t really have the means to pressure him,” Barak said.

Moscow has partnered with Tehran to assure the survival of Bashar Assad’s Syrian regime and Netanyahu publicly urged Putin in a meeting last week not to allow Iran to replace the Islamic State terror group in Syria.

While reiterating that he has no intention of competing in the Labor leadership primaries set to take place in May, Barak, 75, continued to emphatically refuse to divulge his future political intentions. “I am not the issue here,” he said.

At the same time, he continued the verbal shellacking of Netanyahu’s leadership capabilities that has led to many to characterize him as the de facto opposition head in lieu of the dwindling public support for de jure leader Isaac Herzog of the Zionist Union.

“Netanyahu has been kidnapped by the extreme settler right,” Barak said. “His real agenda when he wakes up in the morning is (based on) what Naftali [Bennett] said [the day before],” referencing a perception that the Jewish Home chairman dictates government policy for the prime minister.

Asked for comment on the two graft allegations investigations on which Netanyahu is being probed, Barak described Netanyahu’s conversations with Yedioth Aharonoth publisher Arnon Mozes as being part of a broader “transaction,” going on to label it as bribery. He said Netanyahu should resign over the alleged quid pro quo deal he discussed with Mozes.

Netanyahu has denied any wrongdoing.