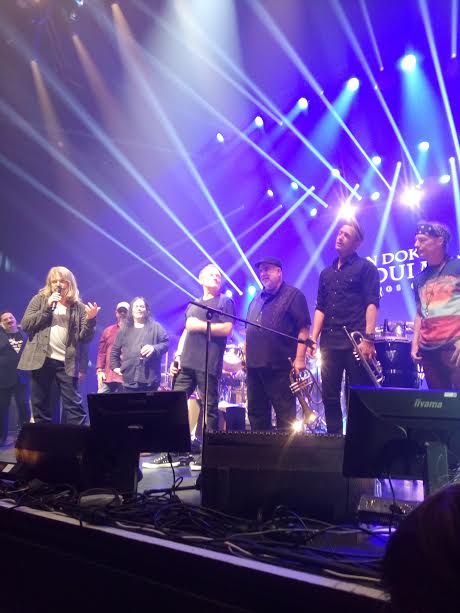 Mandouki Soulmates Wings of Freedom performed a concert at L’Olympia in Paris on March 1, 2017.  Leslie Mondouki the organizer  and leader of the group was born in Budapest and fled  from Hungary to Germany in 1975  with Gabor Guspo and Lazlo Bencher to seek freedom.  He told us that they successfully arrived and settled in Berlin. Lazlo Bencher joined  Leslie in his bands. Gabor Guspo went to Hollywood and founded his studio there.

There were projections on a screen at the back of the stage of people fleeing for freedom.

Leslie spoke to the audience and told them about his story. It was interesting to hear him speak in English.

The group Mandouki Soulmates organized by Leslie Mandouki in 1993  is composed of well known musicians from rock and jazz. These talented people combine their musical diversities and create  very special concerts. Each time the group performs the concert is different from the others.   It was amazing as one lady told me afterwards to have seen younger musicians playing along those that are much older. Kleus Doldinger is 80 and Cory Henry is 29!  She also said it was wonderful to see those with different styles playing together.

Leslie Mandouki  tells about the history of the  group, the players,  sings and leads the group

This concert featured these musicians:

A special guest was Leslie’s daughter who sang with him and with members of the band.

On & On, Diggin’ Down Too Deep, Look Up To The Sky etc., Manfred Mann : Davy’s On The Road Again, Mighty Quinn, Deep Purple : Smoke On The Water, Toto : Rosanna, Hold The Line, Cutting Crew ,Blood Sweat & Tears : Spinning Wheel + a song of Supertramp…

The crowd  sang with Rosanna, Look up to the Sky, Mighty Quinn, Hold the Line and  Smoke on the Water.

Leslie Mandouki thanked the audience. He introduced us to each member of the group. A special welcome was for his daughter who sang.

The audience really enjoyed the concert and we could see that Mandouki Soulmates enjoyed performing for them.  It was just fantastic

Their CD’s are sold only in Germany  but some of the music can be found on the internet.

This fantastic group  has  performed in London and Berlin.  We hope they will include Paris on their next tour.