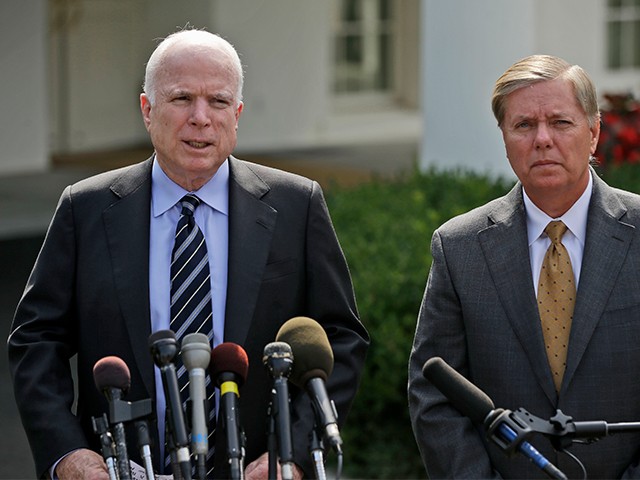 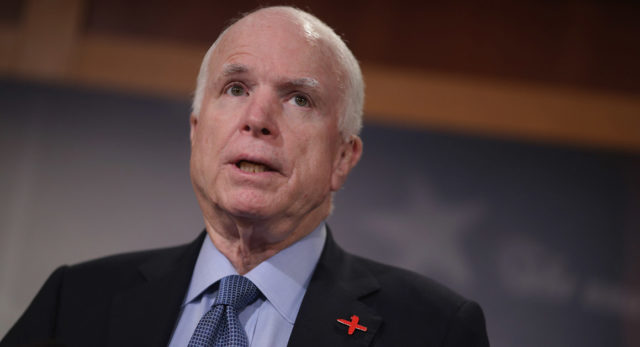 [ Editor’s Note: McCain throws down the gauntlet to Trump and his brilliant White House team to put up or shut up on their charge that the Obama administration legally or illegally wiretapped him and his campaign. The backfire began soon after Trump’s twitter bushwhack of Obama was followed up with zero evidence, and Congressional Republicans quickly distanced themselves.

By Monday, Trump had already retreated, saying that he would have nothing more to say on the matter until Congress had finished its investigation. Yesterday McCain had already said he wanted Trump’s “evidence” by Monday, and here he is below, firing away.

So far, the current Intel people and Obama’s people are all in agreement that no such thing happened, so Trump’s twitter ship is sinking on his deal, as the public will notice that, rather than remaining quiet or taking the 5th amendment, all those in a position to know, so far, are saying it absolutely did not happen.

IF it turns out that Trump made it all up, thinking that as president and having immunity, why not use it to lie when you feel it is to your advantage, this could be a major boomerang in the works this week. I had posed in my first article that the best reason I could think of for his doing this dump is having Obama investigated; added to his own investigation, it was a Hail Mary pass, hoping that they might come up with something.

This is more proof that we have a gang of people who can’t shoot straight in the White House, and who still are in the mode that when you have power, you can use it any way you want to. But what they might be getting ready to learn before the first 100 days is over is that when they throw away the prestige of the Presidency, by acting like a bunch of weasels, that is going to hurt them badly.

I will say as I did in my last NEO article, Trump and his team are going to be their own worst enemies, capable of taking themselves down with one gaffe after another. I do not wish this, as it will hurt the country, with their leaving a trail of destruction in their wake, much as the Obama wars and regime overthrows did. His Nobel Peace Prize is now the biggest bad joke in the history of that award… Jim W. Dean ]

Influential US Republican Senator John McCain has denounced President Donald Trump’s claim that former Democratic President Barack Obama wiretapped Trump Tower, saying either he has to retract it or provide evidence of the allegation.

Earlier this month, Trump accused his predecessor of intercepting his communications at his offices in Trump Tower in New York City just before the November presidential election.

He also said that Obama abused his power and spied on his campaign fearing that his team was connected to Moscow. Trump, however, offered no evidence to support his accusations. A spokesman of Obama denied that the former president or any White House official had ordered surveillance.

McCain said on Sunday that he had “no reason to believe” Trump’s allegations, but if Obama “violated the law” by ordering surveillance, then “we’ve got a serious issue.”

Experts say electronic surveillance of a US citizen by American intelligence agencies would require a warrant approved by a FISA court judge.  Presidents do not have the authority to order such wiretaps and would not even be aware of them as a routine matter.

If the president were involved in the process, it would be “scandalous and unheard of,” said Ron Hosko, a former assistant FBI director. Hosko called the allegations “unprecedented” and “unlikely to have occurred in the very broad way” that Trump described.