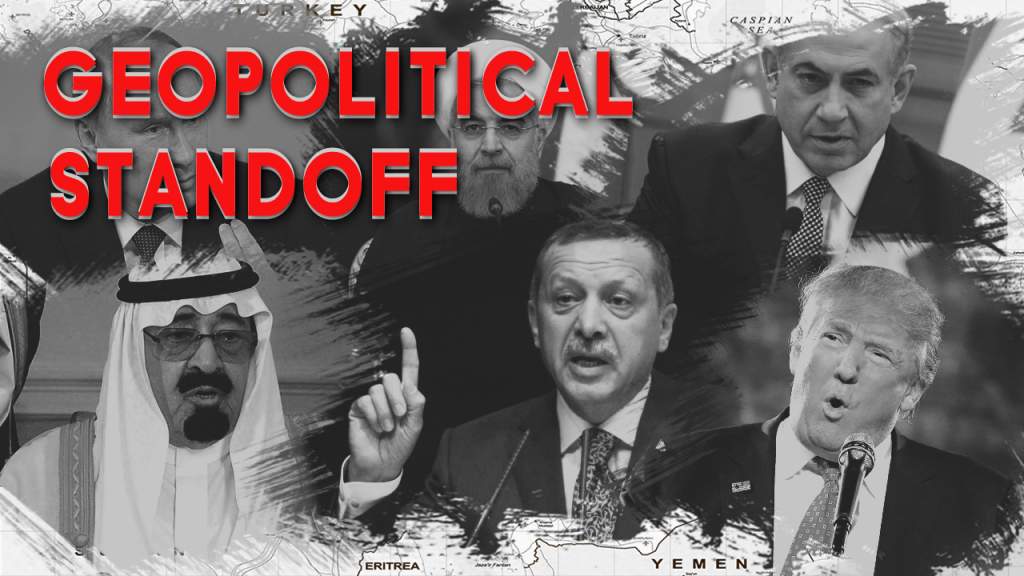 As the ISIS terrorist group is collapsing in Syria and Iraq, the competition among powers involved in the conflict increases.

In March, Moscow and Astana become the main centers of the diplomatic activity with top leaders from Israel, Turkey, the UK and other powers discussing the issues confronting the Middle East. Ongoing events aim to shape the climate of international relations in the region after defeating ISIS. The key players’ conflicting agendas come head to head with each other.

Israel is concerned over the increased Iranian influence, and the growing military capabilities of Hezbollah. The Press Service of the Israeli Prime Minister confirmed that his working visit to Russia pursued two goals:

Another problem for Israel, is the collapse of militant groups in Southern Syria. Both ISIS and so-called moderate rebels had not conducted operations against Israel during the Syrian war. Furthermore, militants fighting the Assad government were being treated in Israeli hospitals until early March. Some Syrian sources report that anti-Assad militant groups had been receiving military assistance from Israel. The Israeli military has repeatedly directed airstrikes against the Syrian army and Hezbollah. However, the ISIS military defeat pushed its members and ISIS-linked groups to adjust. Mounting pressure from the Syrian-Iranian-Russian coalition pushed militants to relocate to Lebanon and Jordan, to search for new patrons, sources of funds and bases. The Israeli leadership is concerned that these militants could join some anti-Israeli groups operating in Lebanon and the nearby areas. Thus, Israel faces major security threats at its borders in the areas of the Golan Heights and Galilee, but the strategic threats from Iran and Hezbollah are the main priority. In this case, Israel has full support from the US and the EU, as well as the UK, Turkey and the Gulf monarchies.

Netanyahu aimed to convince President Putin that Russia and Iran no longer share any common ground in Syria and proposed some alternatives to Moscow. The Israeli agenda is also heavily supported by the mainstream media and think-tanks, which push the narrative, on a constant basis, that some “hidden” tensions between Moscow and Tehran exist. These “analyses” attempt to showcase some differences in the approaches implemented by Russia and Iran as a major rift, but ignore the fact of close cooperation and joint mid-term goals over the course of the conflict.

While Turkey was providing general support to the Israeli efforts, its delegation, which also visited Moscow, pushed its own agenda. Ankara sees its military gains in northern Syria as a major success and wants to repeat this success on the diplomatic front. The Turkish leadership is specifically concerned with the following issues:

Strategically, Erdogan and his colleagues are concerned over the growing “de-facto” influence of Russia and Iran in the Middle East. In a similar vein, Turkey seeks to expand its own power in Syria and Iraq.

The maximum objectives of Turkish foreign policy in the region:

If Ankara is not able to achieve its maximum goals in Syria, it will try at least to set up a Turkish-controlled quasi-state in northern Syria. Then, Turkey will likely try to annex this area.

The Erdogan government is ready to allow more latitude in order to achieve its goals in Syria. Turkish leadership has prepared a bundle agreement which it believes should be of benefit to Russia. However, this looks questionable, because Turkey does depend on Russia economically, while the reverse is not true. This is especially clear in the energy and tourism sectors.

The formal results of the Russian-Turkish talks showed that the sides were not able to reach a broad agreement. Erdogan even admitted that the Turkish Stream gas pipeline and Akkuyu Nuclear Power Plant, the two main energy projects, are still in question. The main Turkish economic achievement was that the Russian Government authorized import of oranges, tangerines, peaches, nectarines, plums, apricots and blackthorns from Turkey and repealed a ban on visas for Turkish guest workers.

Putin and Erdogan also praised the two nations’ cooperation over the Syrian conflict. However, the recent Turkish offensive actions against the Syrian army and Kurdish forces west of Manbij were likely the main reason that the talks did not yield significant progress.

While Saud Arabia and Qatar continue providing financial support to terrorist groups operating in Syria, the main tool of the Saudi Arabian influence is Jabhat Al-Nusra, renamed  Jabhat Fatah al-Sham, and then to Hayat Tahrir al-Sham. Today they have almost no independent agenda in Syria.  Both Gulf nations are fomenters of violence against the Assad government, and concerned over growing Iranian influence in the region. Growing Iranian influence often leads to the growth of protest sentiments among the oppressed Shia minorities of both nations. The crisis is further fueled by the failure of the Saudi-led intervention into Yemen where the Saudi coalition cannot deliver a devastating blow to the Houthi-Saleh alliance, which is partly backed by Tehran. This has led to enormous military expenditures and the demoralization of the kingdom’s military forces. The rift among the members of the Saudi-led alliance also plays an important role in the current situation. Thus, on a regional level, Saudi Arabia and Qatar act as de-facto allies of Israel. This reality undermines their fraudulent, yet often asserted role as the true defenders of the Arab population in the region.

The security situation is also complicated in Jordan. The high popularity of radical Islamic ideologies and the high number of refugees in the area are the main factors causing the instability.

The administration of US President Donald Trump has decided to intensify military deployments in crisis zones across the Greater Middle East. The Pentagon sent troops and equipment to Syria in order to intensify operations against ISIS. The US Special Forces and the Marines are actively participating in the anti-ISIS operation in western Mosul. Meanwhile, the US contingent is set to be reinforced in Afghanistan. These actions show that the Trump administration has shifted its course from the failed Obama policies aimed to train the so-called “local forces”, to a direct-action approach. This will lead to a deeper involvement of US military forces in operations in crises zones around the world. This approach will likely lead to a relatively fast victory over ISIS in Raqqah and Mosul, but will not resolve the main reason of the conflict – tensions among various local fractions fueled by the activity of various sponsors of “terrorism for democracy”.

Meanwhile, the US State Department declared that Hayat Tahrir al-Sham and all factions which merged into it are now considered by the US as a terrorist group. This statement is similar to the position of the Russian-Syrian-Iranian alliance over this “moderate opposition faction” operating in the Syrian province of Idlib. At the same time, the course of the Trump administration is aimed at expanding and strengthening US ties with Saudi Arabia.

In light of these realities, the collapse of ISIS may not mean the end of the Middle East crisis and the region could face another crisis by the end of 2017.