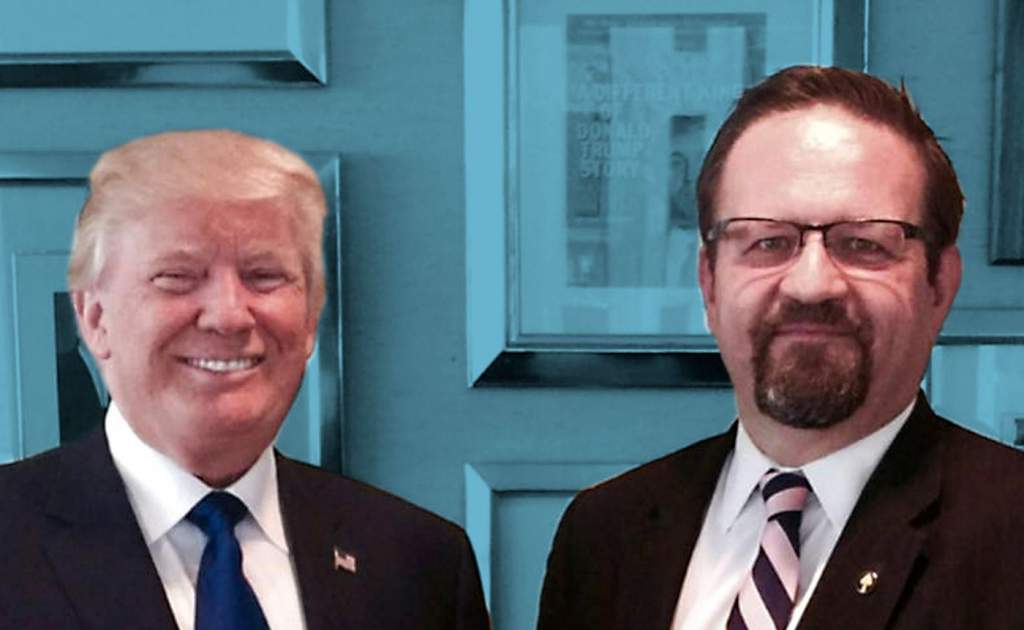 Sebastian Gorka, left, a top aide to US President Donald Trump, seen in on inauguration day wearing the uniform and medal of Vitézi Rend, a Hungarian order of merit with ties to Nazi Germany (Fox News)

Members of a Nazi-allied Hungarian group have said that a deputy assistant to US President Donald Trump is a formal member of their exclusive order.

Get The Times of Israel’s Daily Edition by email
and never miss our top stories   FREE SIGN UP!

In a report published Thursday, representatives of the Vitézi Rend told The Forward that Sebastian Gorka took a lifelong oath of loyalty to their organization.

While Gorka and the White House did not respond to requests for comment, the former Breitbart News editor was photographed and interviewed at Trump’s inauguration wearing the uniform and medal of the Hungarian group.

The US State Department lists Vitézi Rend as a Nazi-linked group, which could render members ineligible for visas. Gorka became a US citizen in 2012.

Vitézi Rend was founded in 1920 by Miklós Horthy, who served as regent of Hungary until 1944. Horthy was an ally of Adolf Hitler and collaborated with the Nazis throughout most of World War II. During the war, confiscated Jewish property was distributed to members of the order by the Hungarian government.

Sebastian Gorka, a top aide to US President Donald Trump, seen in an undated photograph wearing the uniform and medal of Vitézi Rend, a Hungarian order of merit with ties to Nazi Germany (Facebook photo)

Gorka, who is of Hungarian descent, may have inherited the medal and uniform from his grandfather, according to foreign policy site Lobelog.

Prior to completing initiation into the organization, prospective members are required to take an oath of allegiance, which The Forward reported to read as follows:

“I, Vitez [name], swear on the Holy Crown that I know the Order’s goals and code, and based on the orders of the Captain and Order Superiors will follow them for the rest of my life. I never betrayed my Hungarianness, and was never and am not currently a member of an anti-national or secret organization. So help me God.”

Other than at the inauguration, Gorka has worn the medal and uniform in the past, as seen in an undated photo on his Facebook page.

Although Vitézi Rend has not been known to engage in violence, the current-day order maintains all of the nationalist and even racial principles of the original organization established by Horthy.