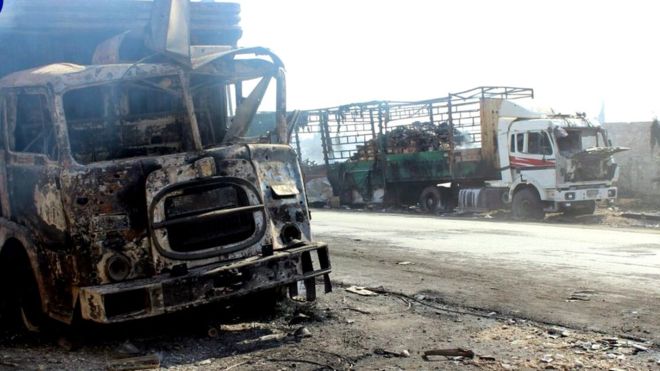 “Diplomacy is the art of telling people to go to hell in such a way that they ask for directions.”

[ Note: I got angry all over again going through this to do the magazine layout, when I thought of the financial and time resources put into this UN report, and what all it left out.

Added to that was how the UN became invisible soon after the liberation of Aleppo, when it could have been Johnny on the spot to get the real story from the refugees who were accessible at the Syrian and Russian initial aid stations.

It seemed to us the UN did not want to be there. It whinked for months about how Syria was not able to guarantee security for relief convoys. But after the jihadis left town and Russia and Syria were bringing the aid in, the UN went quiet. Without the White Helmets’ and jihadis’ internet PR people to spin their atrocity stories for them, the UN moved on to greener pastures.

This fake report was timed to come out just before the Geneva meeting, but fortunately fell on deaf ears. The UN has beaten the Assad war crimes drum as long and hard as Rita Katz, who gave us the fake bin Laden tapes and photos. I guess you can make this stuff up if you have the connections in corporate media to pedal it for you… JD ]

The UN announced its Syrian War Crimes report at a bizarre press conference on March 1st. The report received light coverage on that day and then immediately died, sparing all those in the world who had missed it, because it was an embarrassment to that organization.

I could hardly believe, with Aleppo having been free for some time, that the UN could have produced such a muddled and convoluted report.

It began by stating that victims on both sides had fallen victim to war crimes by all parties. By throwing out this blanket accusation, chairperson Paulo Pinheiro was giving cover to ISIS by saying they were no worse than the Syrian government.

Obviously, the good chairperson did not go to Aleppo after the battle to talk to those on the East and West sides, but signed his name to this monstrosity of a report. All the independent media I have seen since the battle was over reported the vast majority of the people were thrilled that the city was back under Syrian government control, and that the jihadis, who were the real ones who had them under a ruthless Sharia Law siege, had departed with their families to Turkey and Idlib.

The UN viewed that the taking of the city, which ended the fighting that would have continued the civilian killing indefinitely, was really a war crime because the city had been “put under siege” by the Assad government. Incredibly, there is no mention of the terrorists and their opposition supporters having put the city under siege.

And when a difficult negotiation to avoid a fight to the last man of the jihadis and their civilian human shields they had kept with them succeeded in luring the jihadis out of Aleppo, with some going to Turkey and others to Idlib, rather than celebrate this accomplishment, Pinheiro called it a war crime because it was a “forced evacuation.” Creative perception management, if ever there was.

I think Mr. Pinheiro’s report is a war crime. In any other arrangement to separate the jihadis and their families from the city, they would have all been killed, and taking as many Syrians with them as they could in their mass suicide. Witness reports claim that most of ISIS inside the city were foreign fighters anyway, and terrorists don’t come under the laws of war, by their own hand.

The report goes on to repeat the long litany of charges we have heard all through the war, that the limited Syrian air force with its older planes and difficult supply lines had nothing better to do than waste precious air sorties by randomly killing non-combatants, so more ISIS fighters could remain alive to kill more Syrian soldiers. Many of the schools and medical facilities were ISIS command centers, and they only provided coverage to ISIS family members.

Using such facilities, which often have been abandoned for weapons and ammo storage, has been a staple tactic for the terrorists and their Western government supporters. When Doctors Without Borders (DWB) put out their initial report, they claimed that certain hospitals had been bombed, yet later analysis revealed there were no hospitals in those towns. 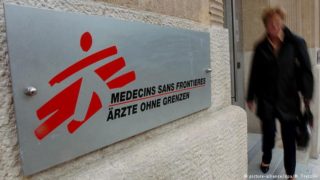 VeteransToday did a background check on DWB and found it to be an intelligence front for the French, which is nothing new, as a substantial part of the NGOs working in Syria functioned not only as Intel fronts, but some ran a major supply line for the jihadi terrorists, especially the Red Crescent out of Turkey.

Running supply lines is a war crime in itself, yet I cannot find a single report where the UN was able to discover how relief convoys became major arteries to the Syrian insurgents.

But it gets even worse, when the report spotlights the UN/Syrian Arab Red Crescent aid convoy that was attacked southeast of Aleppo. Initially, the UN had said the perpetrators were undetermined, but by report time, someone had decided to blame the Syrian Air Force. We are told a fantasy tale of a three-stage attack, beginning with helicopter barrel bombing, then bombing by planes, and then the planes coming down to strafe the survivors.

It all sounded like a B-grade movie, yet later the report lists almost 300 interviews and sources, but does not list who they were, or what events they were witnesses to. Save your energy looking for any detailed witness testimony. There is none in the UN report.

There are some glaring problems with the convoy attack story. First, the Syrian Air Force does not fly helicopter barrel bombing at night because they cannot see. The same goes for the Syrian planes. They are not equipped for night bombing, only the Russian planes were.

And last, the story of the planes coming down to strafe at night is ludicrous, as is the UN claim that all the witness accounts of the event were consistent.

This is never the case in an incident as described. People on the ground are terrified, running for cover, tending to wounded, they are not all standing up trying to ID whether planes or helicopters, what kinds and who they belonged to.

Any interrogator would have told Mr. Pinheiro that when all the witnesses claim to have seen exactly the same thing, that is a strong indication of a concocted story.

The force evacuation war crimes charge is revisited in the report in the context that civilians should never be blocked from returning to their homes [in Aleppo]. This seemed astounding, as civilians were trying to get off the battlefield and out of the city to escape the fight to the death scenario that had been expected, including being used as human shields by the terrorists.

Those lucky enough to get out were able to reach aid facilities in safe areas that were at least able to get them registered on survivor lists, fed, and temporary housing found, while the city went through the difficult process of de-mining, and getting the destroyed utilities running again, especially in the East.

Missing from the UN report was how the Russian Special Forces Arabic branch had infiltrated East Aleppo and operated for months before the final battle. Their task was to remove the jihadi command structure via targeted killings, using tactics from long-range snipers, to “tagging” their vehicles at night, so special bombs could hone in on their signal while moving.

These special ops teams laser targeted ammo dumps and command structures, using state of the art munitions from the Russian Air Force inventory that zeroed right in on the target to reduce bombing error.

As the jihadi commanders were knocked off, they were led to believe they were being killed by rival groups, which ignited intra-warfare among them.

It was at this point that the final push was made on East Aleppo, when the jihadi command structure was either dead or in chaos. Large sections of the city were taken, sometimes in just a few days, due to the jihadis giving ground to shorten their defensive perimeter while squabbling over resource logistics.

None of this is in the UN’s la-la-land report. Nor is there a word about the US, Saudi Arabia, Gulf States, Turkey and Israel having supported the terrorists in Syria, when aiding and abetting terrorism is a grand slam felony. It can even get you bombed or droned.

So now what does the UN want to do? It seems it wants to make a big name for itself by hunting down the individuals that did the convoy attack. But if it turned out to have been a false flag by the Israelis, Turkey, or Saudi Arabia, do you think the UN will do anything? Of course they won’t.

The UN report was a disgrace, and the public deserves a refund. We already knew that lots of war crimes had been committed, and we knew who the biggest killers were. And we knew the UN is not really interested in taking any action against them, for a variety of reasons. We will not let Syria be scapegoated like this, being compared as equivalent to the terrorists. Shame on you Mr. Pinheiro.