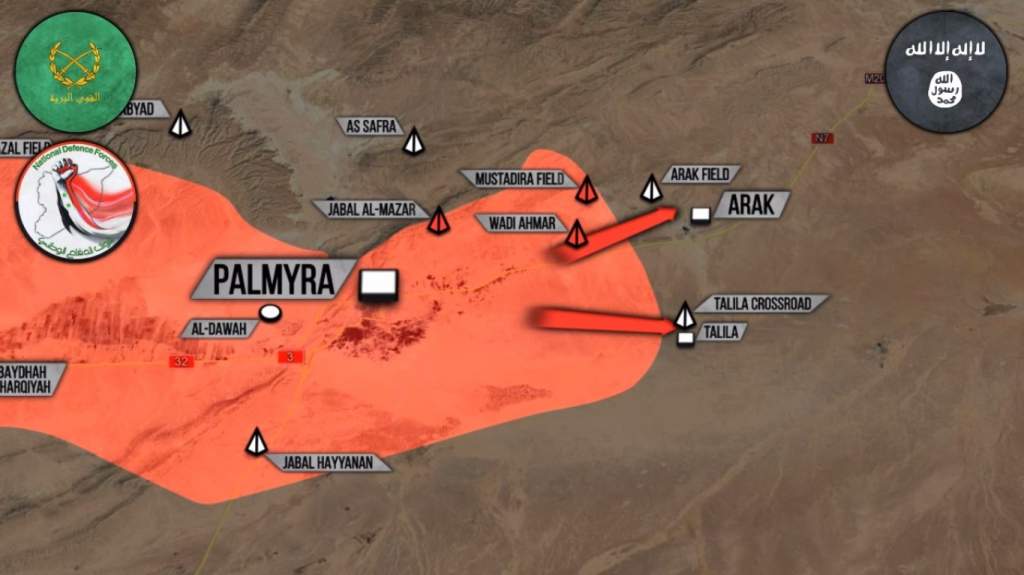 Pro-government forces, backed by Russian and Syrian warplanes and attack helicopters, continued developing momentum against ISIS terrorists in the countryside of Palmyra. Following the liberation of the Mustadira gas field and Wadi Ahmar, Government troops advanced on the town of Arak and the Arak gas field.

Separately, the army and the National Defense Forces (NDF) attacked ISIS units in the area of the Talila crossroad and the town of Talila. The advance was supported by multiple airstrikes which destroyed at least one ISIS battle tank, 3 vehicles, and killed over 10 terrorist group members.

Some 1,000 Syrian servicemen completed their retraining under the guidance of Russian instructors in a training camp near Damascus and replenished the Fifth Legion of the Syrian Army. It is unknown where the retrained troops will be sent. However, the first detachment, which completed its training in late 2016, currently fights against ISIS in the area of Palmyra.

The Army and the NDF advanced on the Sous Hill and the village of Umm al-Mara in the province of Aleppo, seeking to encircle the ISIS-held town of Deir Hafer. Clashes continued in the Jirah Airbase.

Two suicide bombers blew themselves up in the Syrian capital on March 15th, killing at least 34 people and injuring over 100 others. The Wednesday attack followed a double suicide bombing which hit the area of the Bab al-Saghir cemetery, killing at least 40 people earlier in March, and was clearly linked to the sixth anniversary of the so-called “Syrian revolution”.