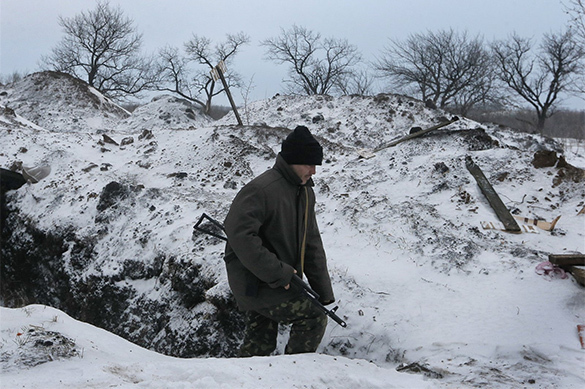 Ukrainian military expert Oleg Zhdanov, in his interview with Observer magazine made a statement that shocked not only Russian military officials, but their counterparts in many other countries.

Ukraine’s military analyst stated that Russia was “incapable of waging a full-scale war with Ukraine.” Moreover, Mr. Zhdanov said that Russia would be able to withstand the might of the Ukrainian army only for one day before the brave Ukrainian soldiers would drive the Russian military out.

“Russia is not ready for a full-scale war, not even with Ukraine. What we can see in the south-east of the country is the maximum what the Russian Federation is capable of. Russia may launch a provocative offensive operation for not more than a day, but then the Russians would have to run back,” Oleg Zhdanov seriously said.

“The Russians will be retreating as long as the Ukrainian Armed Forces will be chasing them out,” he added proudly.

Noteworthy, General Christophe Gomart, the chief of the French intelligence service, stated a while back that Russian troops never invaded Ukraine. The chief of the General Staff of the Ukrainian Armed Forces, Viktor Muzhenko, stated on the Fifth Channel: “There are no regular troops of the Russian army in the Donbass.”

Later, General Muzhenko honestly acknowledged to the press that Ukraine’s losses in the event of a real war with Russia  would be tremendous. Ukraine would have to recruit all men without to be able to fight back.

“More recently, US military experts surprised the whole world, when they said on the basis of their calculations that the Russian army could reach Tallinn in 60 hours,” officer and Senator Franz Klintsevich said.

Earlier, former speaker of the State Duma said that if Russia had to fight with a country, the potential of which was comparable to Ukraine, the conflict could last for four days max. Retired  NATO General Harald Kujat admitted that if  there were Russian regular troops in the Donbass, the war would end in 48 hours.

Describing scenarios of a possible war between Russia and Ukraine, American analysts of the Ron Paul Institute wrote that the Ukrainian artillery would fall silent almost immediately. Russia would destroy artillery troops of Ukraine by air strikes, artillery attacks or surface-to-surface missiles as prime targets.

The Ukrainian military would disappear en masse, soldiers and officers would take off their uniforms and drop their weapons to mingle with civilians to survive. No one does not even think that the resistance of the Ukrainian army to the Russian Armed Forces would lead to a positive result, experts believe.

Pravda.Ru requested an expert opinion from president of the association of veterans of Alfa anti-terror group, Sergei Goncharov.

“I would not pay attention to what Ukrainian officials and experts say. There is no objective reality in what they say. One can see anger and nationalism in their statements. Above all, they do not have any understanding of the situation in their country. To say that the Russian armed forces are not ready for war, that the Russian army is “enough for one day” – this  is a fantasy of infringed self-esteem. We have enough of everything. We have proved this in Syria and in other local conflicts. The Ukrainians make such bold statements because in reality (to their happiness), there is no Russian army in Ukraine. If there were Russian forces there, the Ukrainians would not be showing their teeth,” the expert told Pravda.Ru