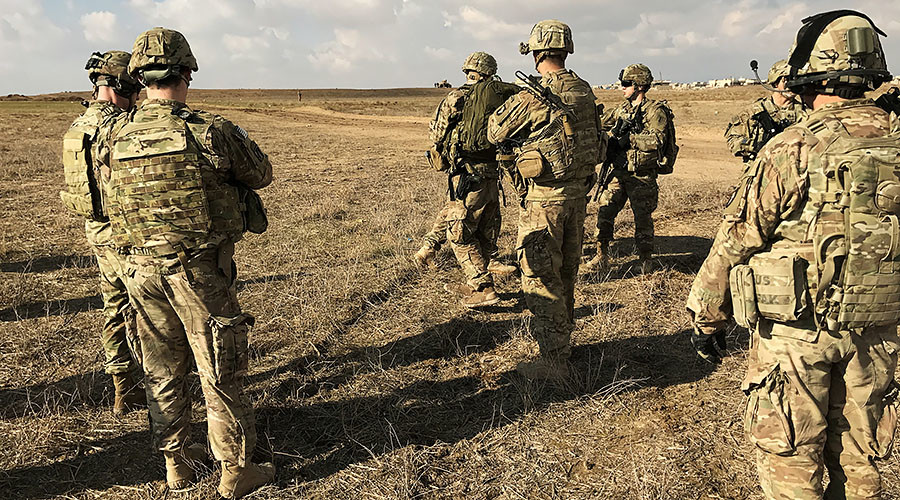 U.S. soldiers gather at a military base north of Mosul.

Editor’s note:  This is a good enough RT piece to publish but not so good that failure to point out some “oddness” isn’t important as well.  Dan seems to be more than a bit myopic it seems.  Were one to take a look at the subject this week, and this was written in mid-March 2017, Turkey, Israel and Saudi Arabia dominate the anti-Iranian subjectbook as they always have.

Their lobbys in DC are the root of the Kagan article he is quoting, it was Turkey that paid off Mike Flynn to dump on Russia and it was Saudi Arabia that paid off Kushner and got a free ride into the White House.

Dan seems to write with an agenda to “not see” and “not examine” and to keep the curtain closed and the wizards such as they are, away from public view.g

Dan Glazebrook is a freelance political writer who has written for RT, Counterpunch, Z magazine, the Morning Star, the Guardian, the New Statesman, the Independent and Middle East Eye, amongst others. His first book “Divide and Ruin: The West’s Imperial Strategy in an Age of Crisis” was published by Liberation Media in October 2013. It featured a collection of articles written from 2009 onwards examining the links between economic collapse, the rise of the BRICS, war on Libya and Syria and ‘austerity’. He is currently researching a book on US-British use of sectarian death squads against independent states and movements from Northern Ireland and Central America in the 1970s and 80s to the Middle East and Africa today.

The British-US plan to weaken Iran via the proxy war on Syria has spectacularly backfired. Now they are more desperate than ever to bring Iran to its knees.

Western think tanks and ‘strategic institutes’ have been getting themselves in a cold sweat about Iranian influence for some time. In 2012, Frederick Kagan (former Bush advisor and Project for a New American Century neo-con) co-authored a report for the Institute for the Study of War warning “the US and its allies and partners in the region and beyond must not only understand Iran’s regional strategy and influence but also develop a coherent strategy of their own with which to confront them. Considering the religious, economic, political and diplomatic power of the two sides, it is simply unacceptable for the US and its allies to allow even such progress as it has [already] made in these realms.” Since Kagan made those comments four years ago, Iran’s “unacceptable…progress” has continued apace.

Its military cooperation with Russia, Syria, Iraq and Hezbollah has developed into an increasingly formalized alliance (the so-called “4+1”), in which it played a leading role in the liberation of the Syrian city of Aleppo earlier this year. In Iraq, the Shi’ite militias it sponsors have been the indispensable vanguard of many of the battles against Islamic State, and it wields considerable influence over the rebel forces in both Bahrain and (supposedly) Yemen. The fall of Mosul will only consolidate this power.

Indeed, according to the Guardian, the territory west of Mosul that is currently being secured by the Iranian-backed Popular Mobilization forces is one of the final pieces of a jigsaw completing an arc of influence stretching all the way from Tehran to the Mediterranean. Such a ‘land bridge’ to the Mediterranean would significantly strengthen Iran’s independence and ability to withstand, for example, any future blockades or sieges. This is making Western planners particularly nervous, as it significantly weakens the West’s ability to control and corral the Iranians; with a long time Centcom advisor Ali Khedery, for example, claiming that such a development “should trouble every Western leader and our regional allies because this will further embolden Iran.”

Forbes, meanwhile, wrote that “Iranian influence in Iraq has the potential to destabilize global oil policy and the global oil market” given that the two countries combined oil reserves almost equal those of Saudi Arabia.

For here, as ever, lies the empire’s real fear – that the people of the Middle East might actually gain control over their own resources, and start using them strategically for their own development. Genuine independence has always been the fear of the region’s British, US and Israeli overlords. And Iran’s potential makes this independence a greater threat than most.

The Foreign Affairs Committee of the British House of Commons spelled this out in a report in 2014: “Iran has the potential to be a major international power… it could be the “engine room” of the Middle East. It lies in a very significant strategic position, with Iraq to the west, former Soviet states to the north which have only relatively recently gained independence, Afghanistan, and Pakistan to the east and the Persian Gulf—a prime route for oil exports—to the south. It has a large and youthful population—75 million or more, of whom 55 percent are aged under 30. Iran ranks 76th out of the 187 countries classified under the UNDP Human Development Index, based upon assessments of life expectancy, access to knowledge and standard of living, placing it higher than any of its land neighbors. Youth literacy is near-universal. The country’s economy is relatively diverse, with supplies of essential commodities and an engineering, research and manufacturing base. Iran has substantial resources of natural gas (second only to the Russian Federation) and enough oil to enable it to be a leading exporter.”

Clearly, the US has been rattled by Iran for some time. Contrary to Trump’s assertions, for example, the Iranian ‘nuclear deal’ was less a ‘gift’ to Iran than a changing of tack to a longer game allowing the West to cultivate a fifth column in the country in preparation for a future attack.

Yet, US belligerence has apparently been stepped up under Trump, with new sanctions, an enormous ramping up of hostile rhetoric and the dispatch of another warship to Iran’s borders in January following an entirely legal Iranian missile test.

But most worryingly, the US has been sending large numbers of US troops to Iran’s neighbors in recent weeks. The initial deployment of 500 US troops in Syria was followed on March 9 by a further 400, with the Washington Post announcing on March 15 that another 1,000 are on the way.

These are just part of a massive flotilla of almost 5,000 US soldiers currently en route to the region, with troops from Saudi Arabia, Jordan and the UAE also being considered. This was revealed just one day after Trump met Saudi Deputy Crown Prince Mohammed bin Salman at the White House, following meetings earlier in the week between Secretary of State Rex Tillerson and the foreign ministers of both Saudi Arabia and the United Arab Emirates. These troops are ostensibly going to aid the fight to oust ISIS from their stronghold in Raqqa. The real reason is to cement US influence and confront the Iranians. This is the US ground invasion which the ‘Gulfis’ have been calling for for years. Its aim is to keep the civil war alive by keeping the Syrian Arab Army out of Raqqa.

In Iraq, Secretary of Defense James Mattis (an avowed anti-Iran hawk who has claimed the country is a bigger problem than ISIS) announced he plans to keep US troops in Mosul long after the city is recaptured from ISIS. Again, this is nothing to do with ‘stability’ but all about countering Iranian influence. Indeed, according to Iraqi Prime Minister Abadi, Trump promised that he would “double US support, not just continue it” following Mosul’s capture; support here meaning the deployment of occupation troops.

But deploying troops to Iraq and Syria to contain Iranian influence is just the start of it. Ultimately, Trump’s Cabinet of anti-Iran warmongers seek to destroy the Islamic Republic itself. Their difficulty is how to convince Russia to go along with this: Syria has taught them that without Russian acquiescence, regime change can be very difficult indeed.

The Wall Street Journal recently ran an article on Trump’s plans to “drive a wedge” between Iran and Russia, quoting a European official that there was “daylight” between the two countries. Indeed, differences do seem to have emerged over, for example, Assad’s future in Syria and, as political analyst Eric Draitser has pointed out, the two countries have a certain rivalry over supplying Europe’s energy markets.

Nevertheless, it would be utter suicide for Russia to go along with any US attempts to undermine its number one Middle Eastern ally.

As the deputy director of the Institute of the CIS, Lieutenant-Colonel Vladimir Yevseyev told Sputnik, “the logic of the White House is simple: any deterioration of relations, whether Russian-Iranian or Russian-Turkish is strengthening the US position in the region.” Neither side has an interest in that.

Indeed, Obama’s so-called ‘reset’ of US-Russian relations did not end well for Russia: then Prime Minister Medvedev supported tough UN sanctions on Iran and delayed the delivery of anti-missile batteries to Iran, not to mention acquiescing to NATO aggression against Libya, only to find the US going back on its commitments to roll back its missile defenses in Eastern Europe, organizing an anti-Russian coup in Ukraine, initiating a major sanctions regime, and sponsoring a proxy war against Russia’s ally Syria. So much for gratitude!

Thankfully, Iranian and Russian interests are deeply converged and a split highly unlikely. As the Institute for the Study of War has pointed out, the list of shared interests is long, ranging from support for the Syrian government, the desire to limit US influence in the Middle East and support for Armenia against Azerbaijan and Turkey, forming a relationship that “rests on a deep foundation of common strategic objectives and interests”. The key, however, is to approach matters with eyes wide open. Trump’s rushing of troops to Syria is nothing to do with any ‘common front’ against ISIS and everything to do with weakening Iran. And in the end, this means weakening Russia too.