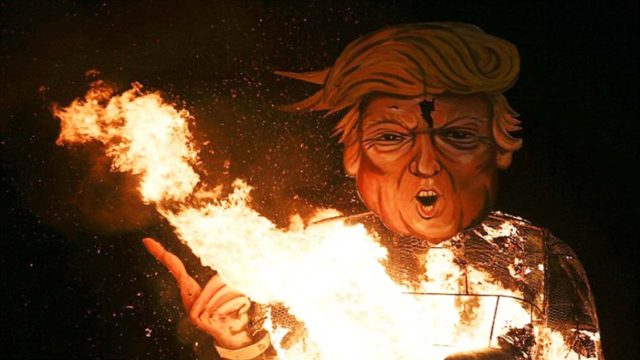 “Just societies cannot be run by big money or armed forces with their too narrow agendas.” – Plato

[ Editor’s Note: The update on this story is the admission by the House investigation committee that there was some inadvertent collection of material on the Trump  campaign, picked up via surveillance of foreign entities being monitored.

Of course, the door was left open by FBI director Comey’s statement that there was an active investigation on the Trump-Russian ties, which appears to be a continuing follow-up on the Christopher Steele file follow-up, which was no big surprise.

The FBI knows it will be scrutinized very carefully for what it did, or did not do in this case, so I am sure it will be taking great care to document a solid case whatever it is, which may be that the allegation could not be verified.

The evolving story here is that my prediction is coming true in an earlier Press TV Debate Show that Trump had wounded his new administration with his constant tweet hysterics. The world is not only becoming exhausted with the news hogging on diversionary topics, but it’s sucking the oxygen out of the air for much more important topics.

One has to wonder whether this might have been the goal; meaning what could be going on behind the scenes that the Trump people don’t want attention on? Color me suspicious. One possibility is that the current jihadi multi-pronged offensive in Syria that could not have been launched without fresh troops and supplies by the proxy terror supporters.

There are signs that the White House is sensing they have overdone it with this week’s backing off walking away from the Iran nuclear deal. A professional security analyst made the announcement at a Carnegie Foundation event, and not some campaign official hack. Also, notice how, in all Trump’s endless claims of the P5+1 home-run accomplishment being “the most horrible deal in the world,” not one word is mentioned about how it totally exposed that the claims of Iran’s hidden nuclear weapons program had been a complete hoax the entire time.

Even Israel, who hates Iran with a passion, could put not a shred of evidence on the table to support a two-decade tirade that Iran was a year or two away from “da bomb”. Even worse in this glaring and confirmed hoax was that aspect of it was completely ignored by corporate media, demonstrating how in-the-bag it was with the hoaxers. VT led the world on tooting that “hoax confirmed” horn, and we remained alone in doing so, as is too often the case… Jim W. Dean ]

Trump had good advice to be out of Washington on the House Intelligence Committee hearing day, as he got so roasted that they could have smelled the barbecue all the way down in Tennessee where he was enjoying a hardcore Republican fan rally.

Press Secretary Sean Spicer was left to put the best spin he could on the Trump Tribulations from tweeting too much about Obama’s phone taps.

I predicted early on that he would get himself into endless problems doing this, and he has. But even worse, it appears that he is not even learning from his mistakes, displaying a recklessness that many fear might be exhibited during his term over much more serious issues than a cheap dig at an ex-President.

Never in recent American history have both FBI and NSA directors stripped a president down bare on the charges Trump had made. Both said there was not a shred of evidence within their domains to substantiate Trump’s charges that Obama had ordered him to be wiretapped.

FBI Director James Comey did not mince words, saying that he had “no information that supports those tweets”, a carefully worded dig at Trump for being so stupid as to grandstand like he did. He also restated what everybody already knew, that no one, including a president, can unilaterally order a wiretap.

But then, with permission from the Justice Department covering his behind, Comey gave the White House some payback with his disclosure that there was an ongoing investigation into the alleged Trump campaign and Russia ties. This was not news by any means, as the ex-MI6 dossier fallout had disclosed that the FBI had not been able to confirm any of the allegations, which is a big hint that the FBI had been looking into them, which of course they had to. The material had been passed over to them by the source.

The material from former-MI6 Christopher Steele has been put into serious question, since it was revealed that he obtained it through intermediaries that paid other sources, which provided them an incentive to seed some truthful information into some bogus juicy material, either for the extra money they wanted, or as part of a psyop they are running themselves.

The latter would be a chaos theory move to confuse and abuse. Steele had reputation credit with the FBI via material he had supplied for the FIFA investigation scandal, but he remains hiding out until this all blows over.

Trump had ignored demands even from Republicans like John McCain to submit the White House’s evidence by today to support such a serious allegation against Obama. This was an unusual request from a senior member of a new president’s own party. But McCain went even further at the end of the day. He demanded that Trump issue an apology to President Obama.

The hearing droned on for five hours, while both parties and individuals got their political party’s good licks in, and enjoyed being in the limelight. It is always a wonderful day for a Congressman to be seen by his constituents in a high-profile hearing. People like Sam Ervin became well-known national celebrities during the famous Watergate hearings through his gift of oratory.

Republicans kept trying to score points to have Hillary Clinton’s ties with Russia investigated more, taking a cue from Trump, with his wanting to put the Russia monkey on her back. Sure, she got money from a Russian oligarch, but who wouldn’t? After the Citizens United Supreme Court Case, any corporation can donate to a US candidate.

That case opened the door, for example, for a flood of Afghanistan drug money to flow into political races all over Europe and the US. An honest political is at a huge disadvantage under this new system.

The losers in all this are the voters. An important day was wasted in diverting attention from major issues of the day. Even Trump’s Supreme Court nominee was overshadow by the “tweet hearing”, and the Obamacare repeal and replacement legislation vote is coming up Thursday, with Senator Rand Paul telling us that it cannot pass the way it is structured.

The Trump White House has lit fires everywhere and will be hard pressed to think they can be controlled, despite Trump’s polished talent for blaming everyone but himself for failings. But in all fairness to him, he is not alone on the world stage in that category.

Turkey’s Erdogan seems to be trying to “out-Trump Trump” with his rhetoric over Germany and Holland blocking his referendum rallies. The Nazi tagging was over the top, but then he went even further with his gas chambers smear. Germany’s Merkel was in a rage, but did not descend to name calling like Erdo. We all know he is enjoying playing the defender of Turkish honor right before the referendum vote.

He has weaponized the Syrian refugees in a callous way, with his threat to send 15,000 a month into the EU, like they are IS terrorists. And his demand for the Turkish visas continues to fall on deaf ears, as the EU countries know he just wants to dump his unemployed into the EU to make money and send it back home.

The silliness is spreading like the flu now. A Turkish meat producer association is deporting 40 prized Holstein cattle back to Holland as their show of support for Erdogan’s campaign. This makes Russia have to wonder how quickly Turkey can overreact, especially following the poor results of Erdogan’s Putin meeting, where no major trade deals were finalized, and Turkey put 130% duties on Russian wheat.

Poroshenko joined the “shoot myself in the foot” gang with his crazy announcement to boycott commerce from Donbass, primarily the coal that is so badly needed in the rest of the country.

The IMF immediately put the brakes on their meeting to approve the next $1 billion in credits to keep the country solvent for another six months. Kiev never misses an opportunity to play “the gang that can’t shoot straight”, once again.

And last, Israel jumps into the fray with its bombing Hezbollah in Palmyra in the middle of the counter-terror operations going on there. The usual charge of striking sophisticated arms convoys was the justification, but inquiring minds cannot figure why anyone would be trying to ship such arms through Palmyra, when the Syrian army is still trying to clear the surrounding countryside and de-mine the city.

And because Syria actually fired missiles at the Israeli planes who had just bombed forces fighting ISIS, Israel is now threatening to take out all of Syria’s air defenses, a huge escalation, and what some of us feel is a desperate plan to kill the momentum of ISIS losing in Syria and a political solution being implemented.

A political solution would allow for bringing all those combat-experienced Hezbollah forces back to Lebanon to secure its southern border; and yes, they might bring back the weapons they have been using in Syria. So an Israeli attack on Syria’s air defenses would put both Russia and the US in an awkward position, regarding how they could go along with that at this point in the Syria War.

Is Bibi trying to bait Russia into using its air defenses against Israeli planes attacking the Syrian army? And if that were done, would Bibi call on big brother Trump to support its ally Israel by helping it take out the Russia air defenses to “protect Israel”? I fear there are those that will do anything to derail Syria’s escaping the Balkanization fate that had been chosen for it.