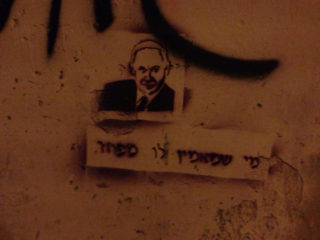 [ Editor’s note: This article by Sami Jadallah is an important read. “Enhanced” techniques to manage civilians are tested in Gaza and exported to other countries — hence the title of this article. For instance, a report says St. Louis police have bought Israeli skunk spray for use in crowd control. Due to its noxious odor, the skunk spray could mask other chemical or biological agents.

In the last 4 years, the sprinkler system of a small town in northern New Mexico (where you might be Lost Almost), and some of the street lamps have possibly been fitted with micro computer-controlled systems that can detect pre-identified individuals and spray them as they walk by.

Americans need to become aware of the routine technology that is being deployed within our community infrastructure. Pedestrians might notice a strong, localized skunk odor hovering in the air for about 10-feet, where there were no skunks, perhaps in the midst of downtown. Aside from the skunk smell, any airborne agents in the vapor could be pathological in nature and cause illness. 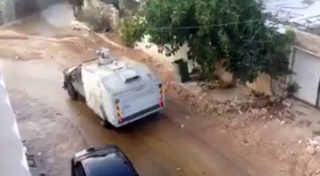 So, despite claims that the “skunk water is drinkable”, people on the West Bank who have been sprayed or have had their homes sprayed need to continue to take samples and get more laboratory tests to identify the contaminants that were sprayed. In this day and age, it could have been a bioweapon cocktail incorporating nanotech. At the least, they can submit the test results to the United Nations to properly document the attack.

Looking back, there are those who suspected that Bibi was “full of it”, but this recent update is truly beyond the pale. Awarding a D-minus grade for this semester in the “gets along well with others” department… Jim W. Dean and Erica P. Wissinger ]

Excuse me for sharing this rather new, innovative and interesting use of “Shit” as a select weapon by the Israeli Occupation.

Israel, throughout its history has been very innovative in using “select” weapons for its wars against the Palestinians, the Arabs even the Americans.

It has used “terrorism” extensively years before it became an independent “state,” bombing market places and indulging in mass executions of Palestinians in villages, executing Egyptian POWs, and of course the most infamous of all, the bombing of the King David Hotel; not to mention the many assassinations it committed worldwide using its extensive network of dual citizens.

In recent years, the Israelis used their American-supplied F-15 and F-16s to bomb Gaza with phosphorous and cluster bombs.

In the Occupied West Bank, it used the 7-meter high Apartheid Wall to separate Palestinians from their own farms and homes, and now uses 450 checkpoints, where millions of people are herded like cattle as a matter of daily routine, day in and day out.

Now, Israel has topped all. It has invented “Shit” as a weapon against Palestinians, by spraying “shit water” on Palestinian homes, people and gardens.

Frankly, I am lost for words; I do not know what else to say. I leave it to you to think of how our $36 billion donated to Israel will be used. And, so what? If, due to lack of funding, 24 million Americans will lose their medical coverage if Obamacare is thrown out, who gives a ‘shit” about that anyway. Certainly not our Congress.

Postscript: Sorry about the impolite use of language, but I thought everyone must see this.

[ Editor’s note: Unable to pull the original Facebook video into this article, we have used a similar video that shows the same activity. ]

The Way to the Spring, by Ben Ehrenreich