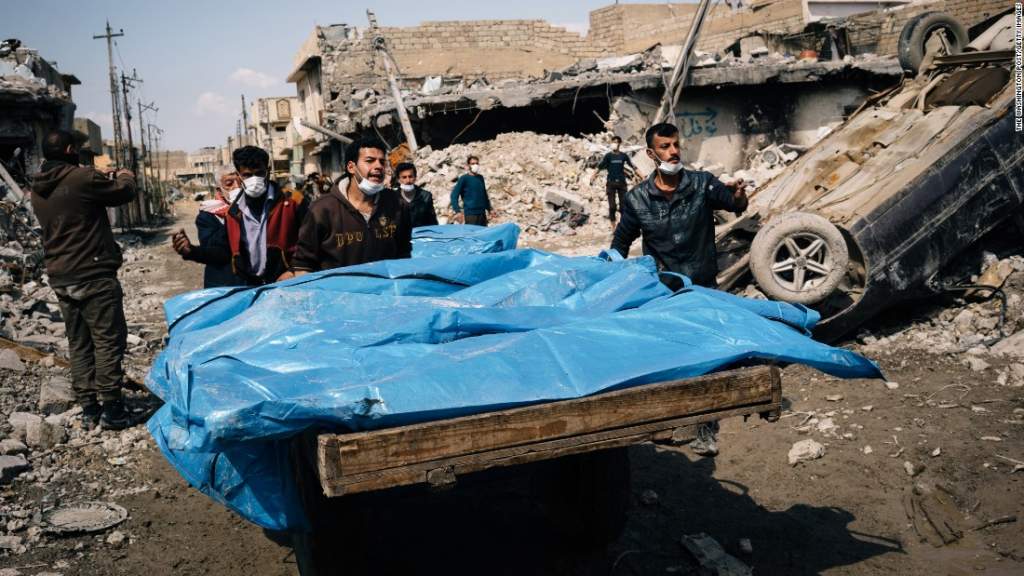 [ Note: The official Iraqi investigation by the military is claiming that they have found evidence of the walls of the building being boobytrapped and no evidence of a bomb “hole”, whatever that would look like in a destroyed building like this.

Who knows what happened. Did the Iraqi’s give the wrong coordinates? Did ISIS park a truck bomb out in front, knowing that it would be seen and bombed and all those combined explosives blow this building to smithereens?

The roulette wheel of death gets spun many times a day in Mosul. I was a bit shock to see early on all the Grad launchers massed outside the city, finding his hard to believe that he Army could use them politically, with not way to blame the conflagration on Daesh.

And then there were the large calibre artillery that was being used despite the obvious civilian carnage that would cost. The Iraqi military and political structure knew what the deal was from their East Mosul beating that they took, with 100’s of car and truck bombs being used against them, with well trained and equipped troops getting blown to bits and generating huge casualties.

Baghdad does not want its best forces gutted in taking West Mosul. They are needed for future fighting as the terror war will not be over when Mosul is taken. There may still be problems with Turkey and Saudi Arabia They are also going to be the heroes of the country.

And they will hopefully be the core of a highly modern and motivated military force that can be the glue that can connect with the Syrian, Russian and Iranian counter-terrorism forces to try to keep the lid on things in the neighborhood. I did not leave Turkey out by mistake, but on purpose. You all know why… JD ]

A senior Iraqi official has said that civilian deaths in last week’s Mosul tragedy were caused by a US-led coalition airstrike.

Bashar al-Kiki, chairman of the Nineveh Provincial Council said the US-led attack targeted a nearby Daesh truck, laden with explosives. The US military has confirmed that its warplanes hit a location in western Mosul on March the 17th.

The US Central Command said the airstrike was carried out at the request of Iraqi security forces. Iraq says it has opened a probe into the attack. The airstrike reportedly killed more than 200 Iraqi civilians.