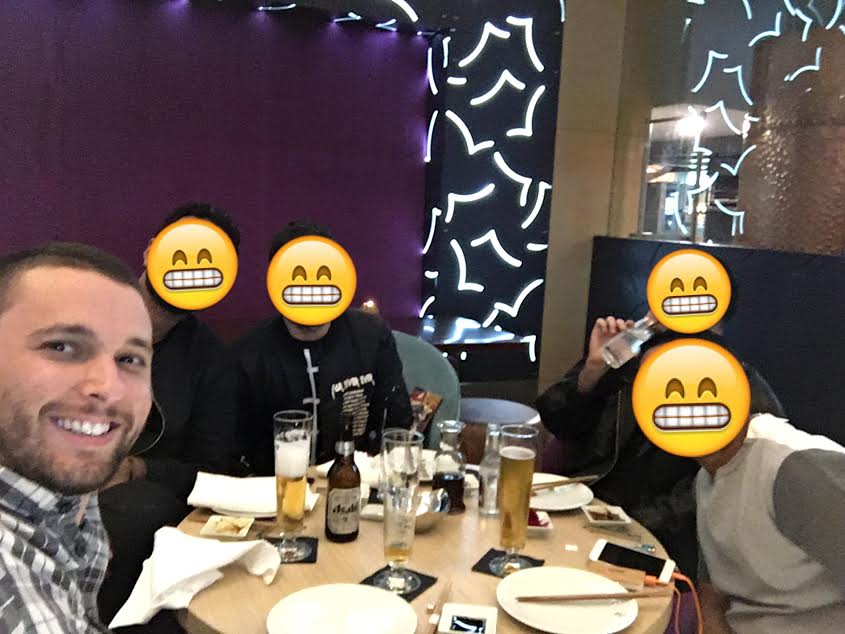 There are few things (that I’ve experienced, anyway) as terrifying as being an Israeli in the middle of a crowded bar in the Kingdom of Bahrain while a Saudi guy jokes — quite loudly — that you’re in the Mossad.

I mean, Mossad jokes can be pretty funny, but not so much when you’re in a country that publicly considers itself an enemy of Israel, in a region of the world where being accused of being an Israeli agent is oftentimes as good as being sentenced to death, and you have no idea who may be listening.

But it turned out fine.

In January, I made the decision to travel to Bahrain — a tiny island kingdom in the Arabian (/Persian) Gulf, near Saudi Arabia and Qatar — and, though my friends thought I was insane, I was always confident in my decision…at least until February, when it came time to actually go.

Then, I found myself refusing to bring hand sanitizer because I couldn’t find one without Hebrew writing on the bottle (I came to regret this later), pulling my insurance, bus, and credit cards — and especially my IDF reserves ID — out of my wallet, and changing the time and date settings on my phone from Israeli to American. Not to mention feeling quite ill in the hours before boarding the plane.

As it turns out, all of that was a huge waste of time. It was a great trip. Everybody I encountered was lovely, and really couldn’t have cared less that I was Israeli. And yes, they knew.

Because I spent the past year or so reaching out to people throughout the Arab world via social media, I had several virtual friends in Bahrain, as well as in Dammam — the Saudi city about 45 minutes from Bahrain via the King Fahd Causeway bridge — and I told them all I was coming.

Though that made my friends in Israel think I was even more insane, that was really what made the trip what it was.

(It is important to take a moment to note two things. First, I spent time with a specific subset of Arabs. They were primarily young, well-educated, wealthy, Sunni, and obviously not uber religious — as you’ll see from all the drinking. I have no doubt that I would have received a different reception had I had the opportunity to interact with different communities. Second, while I traveled on my American passport, Bahrain is the only country in the Gulf that doesn’t automatically deny entry to Israelis.)

I went for drinks at the Four Seasons and the Ritz Carlton split up by a stroll through the Bahraini food festival with a performance by an Indian dance group. I was honked at by excited Kuwaitis celebrating their national day by driving around with Kuwaiti flags on their cars. I went for drinks at a place called the Big Texas Barbeque & Waffle House with an Arab television personality.

And — less fun — I spent unreasonable amounts of money on vegetables because they had to be shipped in from all over the world. The avocados came from the US, the onions came from India, the carrots from Australia, the cucumbers from Jordan, and the tomatoes from Saudi. Very inconvenient.

Thanks to a Saudi friend, I ended up at a birthday party at a beachfront mansion on an artificially built island (the tiny Gulf countries are known for building artificial islands to increase their land area) surrounded by drunk Saudis and Kuwaitis — who often travel to the much more socially liberal Bahrain on the weekends. Three Saudis, one Bahraini, and one Israeli walk into a bar…

A Saudi girl, whom my friend later described as “one of the biggest ballers in Saudi,” offered to issue me an invitation to visit Saudi Arabia, which is the only way for non-Muslim foreigners to travel to the notoriously closed and conservative kingdom for reasons other than business.

Just moments before or after — it’s hard to say — a Kuwaiti guy I had been talking to assured me that Israel was definitely working with Iran and ISIS against the Sunni Arab countries. I think my response to that was something convincing like, “No man, we’re on your side.”

And earlier in the evening, when we stopped at an Indian restaurant to pick up some bottles of vodka (outside of the legally approved channels), another Saudi took me to task because, in his view, the Israeli-Palestinian conflict is heavily armed Israeli soldiers against Palestinians who “just” have stones.

Though obviously these characterizations of Israel and the conflict are incorrect, it was pretty amazing to be able to have these conversations in Bahrain, in a much more civil and respectful way than they are often had in America or Europe.

Israel came up in other far more unexpected ways as well.

One afternoon, I took a tour of the Al Fateh Grand Mosque — one of the largest mosques in the world, built three decades ago by the father of the current Bahraini king. Assuming the tour guide worked for the government, and therefore wouldn’t be pleased to find out he was giving a tour to an Israeli Jew, this was one of the few times I intentionally withheld my Israeli identity.

There were so many opportunities to mention it, though. When he gave me the incorrect etymology of the word Hallelujah, which he tried to connect to Arabic somehow. (Keeping my thoughts to myself at that moment was probably one of the most difficult things I’ve had to do in a while.) When he mentioned that Hebrew, which he brought up to explain that Arabic is a Semitic language written from right to left, is the official language of Israel. Yes, he said Israel. Not Palestine or the Zionist entity or anything like that.

And when he mentioned that there aren’t any mosques that non-Muslims are forbidden from entering, I brought up the Al Aqsa Mosque in Jerusalem, expecting he would say something negative about Israel. He briefly mentioned a complex security and political situation — though I’m fairly sure that has nothing to do with it — but that was it.

Not as shocked, though, as I was when I walked into a supermarket one evening to hear — get this — an Israeli song playing over the loudspeaker. As one can imagine, I spent the next few minutes awkwardly trying to take a video without being too obvious.

There were really only a couple times when I felt scared in Bahrain, and there were none when I actually had a real reason to.

One evening, I sat with my Bahraini friend at the Fort of Bahrain, a 16th century Portuguese fort built upon the ruins of various civilizations dating back to 2300 BCE, looking out over the sea toward Iran when we heard a loud noise. The “I <3 Bahrain” sign in a neighborhood known for its nightlife.

Normally, this isn’t something I would remember. The only reason it stuck in my mind is because I joked to my friend at the time that the sound was Iran coming to snatch me.

A day or two later, a Jordanian friend texted me asking if I was okay, since there had been an explosion in Bahrain. I hadn’t heard anything about it, but after a quick search, I saw that there was indeed a bombing not too far from where we had been sitting.

It was a tad disconcerting to be an Israeli near the scene of a terrorist attack, not because I suspected that I was a target, but because I was worried I might be suspected of carrying it out. My Jordanian friend didn’t help by joking that it was probably a secret operation and I’m an Israeli spy…

So what did I learn from this trip other than that I’m unreasonably paranoid and that Arabs like to make Mossad jokes? It’s that Arabs willing to have a dialogue with Israelis are out there, and they are not small in number. We just have to engage with them.