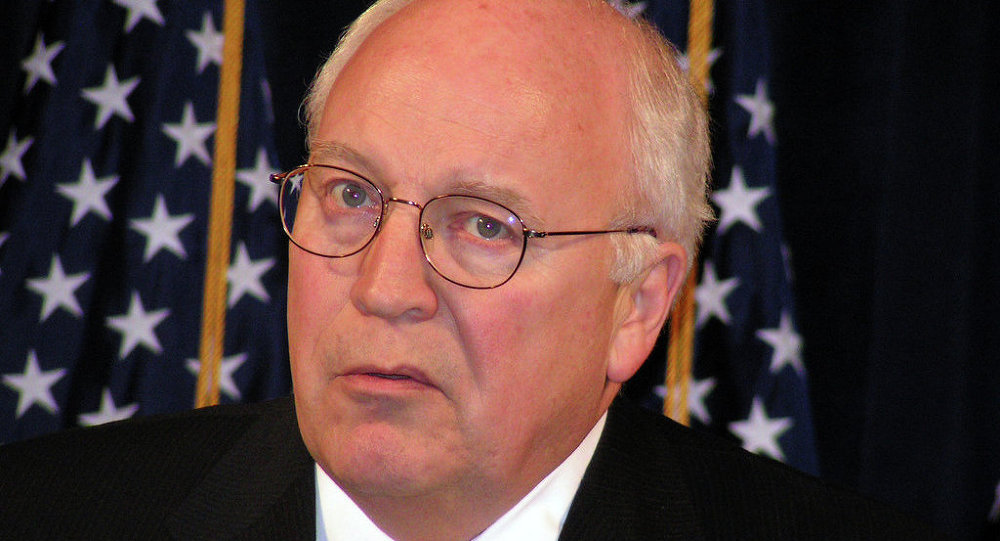 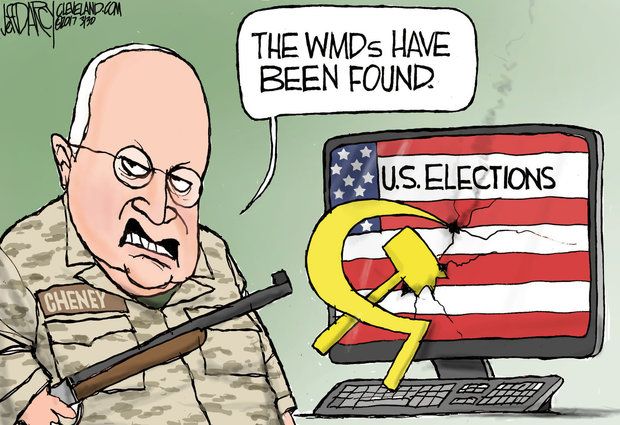 
Dick Cheney is still thirsty—for blood. The bloodbath he helped create in places like Iraq wasn’t enough. He now wants to spread his diabolical wings in other places such as Russia. He has recently said of Vladimir Putin: “I think he has designs on the Baltics. … We know he wanted Crimea — he took it.”

Putin is certainly laughing. Here is a guy who deliberately lied about weapons of mass destruction in Iraq and who even wrote a best-selling book postulating lies and fabrications, and now he is saying that Putin had designs on the Baltics! Is Dick Cheney that old? Is he losing his memory?

Cheney moved on to say:

“There’s no question that there was a very serious effort made by Mr. Putin and his government, his organization, to interfere in major ways with our basic fundamental democratic processes. In some quarters, that could be considered an act of war. I would not underestimate the weight that we as Americans assign to Russian attempts to interfere with our process.”[1]

Cheney’s logic is pretty clear: if Russia interferes in the US election, then this should be considered “an act of war.” But Cheney cannot follow this dubious or dumb position to its logical conclusion precisely because that would ruin his entire Neocon ideology. Should Iran invade America for overthrowing a democratically elected official in Iran in 1953? Should countries like Guatemala, China, Panama, Afghanistan, Syria, Libya, Italy, etc., invade America because America has been meddling in their affairs for decades? Why can’t Cheney start thinking straight?

Cheney keeps talking about maintaining “America’s global supremacy and leadership” in his book Exceptional: Why the World Needs a Powerful America,[2] but he does not tell his readers that this is a complete departure from what the founding fathers themselves had envisioned. He also does not tell his readers that “a powerful America” means a powerful state where the rule of law is excluded from political discourse and where the Neocons and the oligarchs in Washington and elsewhere get to do whatever they want.

Back in 2005, Cheney asserted that the invasion of Iraq would turn out to be “a success story.”[3] He said then:

“If you look at what the dictionary says about throes, it can still be a violent period, the throes of a revolution. The point would be that the conflict will be intense, but it’s intense because the terrorists understand that if we’re successful at accomplishing our objective — standing up a democracy in Iraq — that that’s a huge defeat for them.

“We will succeed in Iraq, just like we did in Afghanistan. We will stand up a new government under an Iraqi-drafted constitution. We will defeat that insurgency, and, in fact, it will be an enormous success story.”[4]

I wonder if he is still fantasizing a ‘success story” in Iraq. When it was widely known that the Bush administration forged evidence to bludgeon America to death in Iraq, Cheney responded by saying that his critics were “dishonest and reprehensible.” He said that they were “opportunists” who were postulating “cynical and pernicious falsehoods” to score some political points.[5]

Either Cheney was a complete idiot positing one nonsense after another back then or he was deliberately lying to the American people—or a combination of both. As military historian and retired career officer in the Armor Branch of the United States Army Andrew J. Bacevich writes,

“Apart from a handful of deluded neoconservatives, no one believes that the United States accomplished its objectives in Iraq, unless the main objective was to commit mayhem, apply a tourniquet to staunch the bleeding, and then declare the patient stable while hastily leaving the scene of the crime.

The fighting in Afghanistan and Iraq has exacted a huge price from the U.S. military—especially the army and the Marines. More than 6,700 soldiers have been killed so far in those two conflicts, and over fifty thousand have been wounded in action, about 22 percent with traumatic brain injuries.

“Furthermore, as always happens in war, many of the combatants are psychological casualties, as they return home with post-traumatic stress disorder (PTSD) or depression. The Department of Veterans Affairs reported in the fall of 2012 that more than 247,000 veterans of the Afghanistan and Iraq wars have been diagnosed with PTSD. Many of those soldiers have served multiple combat tours.

“It is hardly surprising that the suicide rate in the U.S. military increased by 80 percent from 2002 to 2009, while the civilian rate increased only 15 percent. And in 2009, veterans of Iraq were twice as likely to be unemployed as the typical American.

“On top of all that, returning war veterans are roughly four times more likely to face family-related problems like divorce, domestic violence and child abuse than those who stayed out of harm’s way.

“In 2011, the year the Iraq War ended, one out of every five active duty soldiers was on antidepressants, sedatives, or other prescription drugs. The incidence of spousal abuse spiked, as did the divorce rate among military couples. Debilitating combat stress reached epidemic proportions. So did brain injuries. Soldier suicides skyrocketed.”[7]

Perhaps Cheney needs to put that in his pipe and smoke it. His relentless, pathetic and ultimately worthless attempt to demonize Russia should be an embarrassment to decent Americans. He is trying to revise the New World Order, but we all know that it is dying.