General Michael Flynn sports 4 Bronze Star devices “without Valor” on his ribbon bar yet his lawyer claims Flynn’s medals are for “actions” in the war on terror.  The letter further alleges that Flynn was “fighting this nation’s battles around the world.”

As the English language is my mother tongue, to paraphrase Senator Sam Ervin of Watergate hearing fame, I am astounded to read this.

Perhaps a top level lawyer, if questioned as to his motives, might be able to weasel his way out of it, but Flynn is supposed to know better, how this is a smear on those who fought and sacrificed with no recognition while this man has taken payoffs from Russia and Turkey and lied with every breath, shaming us all.

The Bronze Star Medal itself is under review by the military as an ambiguous award often given as an “end our tour” consolation prize for those who serve but don’t risk or sacrifice.  For those in Kabul, land of the “dancing boys” and palaces built at taxpayer expense, only overshadowed by the palaces of Baghdad’s “green zone,” service for those of Flynn’s rank was hardly sacrifice at all and for those who received Bronze Stars with no “V” device, it involved no combat either.

We note that it is a common joke in the military that the “V” device is awarded much the same as some purple hearts, for “salad fork” injuries in battles that take place in underground bunkers and in the buffet line, while others lose arms and legs and suffer the rigors of extreme combat with no recognition at all.

It would be different if Flynn were an “Audie Murphy” type, quiet, unassuming and deferential to his betters.  He is not.  He is a whining, childish loudmouth addicted to spreading gossip, smears and lying.  Flynn is a man who has proven simply can’t hold an honest job, which explains his career filled with controversy and disasters and, of course, why he was drawn to Trump.

Remember, it was Flynn that failed to inform anyone he was on the payroll of Turkish intelligence while sitting through CIA briefings.  This is the same Flynn who was going to help Turkey kidnap Mohammed Gulen, a cleric known to stand up to Turkey’s Hitleresque dictator Erdogan, the man paying Flynn’s legal fees.

This is the same Turkey that has been openly supporting not only ISIS but al Qaeda as well and has for many months secretly employed General Flynn and his son as “agents” but to what capacity? Kidnapping for sure, but what else?

This week, high power lawyer Robert Kelner, representing former General Michael Flynn in his quest to keep out of prison, wrote a letter about Flynn’s military service that requires careful examination.  Valor and sacrifice in combat is not a joke and, minimally, Flynn owes combat veterans an apology in our estimation for claims made in this letter.  You decide: 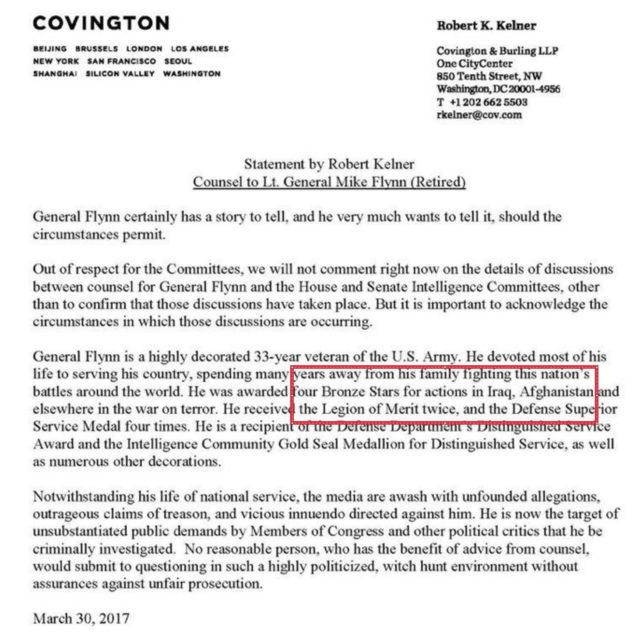 The Bronze Star issue is being addressed.  There is a real difference and if Flynn doesn’t remember such things we will refer to this recent article in Military Times:

“The Pentagon also will create a forcewide definition of “meritorious service in combat,” which will apply to both the “C” device for combat distinction and also affect the criteria for a Bronze Star, which by definition is a combat medal.

“We’re ensuring that the Bronze Star goes out to those who are incurring the risk of combat or actually have a significant risk of hostile action,” the defense official said.

Medal policy on the Bronze Star has been criticized for years as ambiguous. In some cases, the medal is affixed with a “V” for valor and reflects courageous and potentially life-saving acts of bravery under fire. Yet in other cases, it is awarded for “meritorious service” that could be, essentially, a desk job in a deployed setting.

In the 1990s, some service members with peripheral duties related to operations in Kosovo received Bronze Stars without ever leaving the U.S.

The policy change announced this week requires that all future Bronze Stars meet the new and tighter definition of combat. The final wording on the policy has not been finalized, and when it is, its interpretation will remain up to the individual services.

“If people were complaining that Bronze Stars are given out for things that aren’t necessarily worthy of it because they’re not in combat, I think we are addressing that by applying a decision that says the Bronze Star will only be awarded under combat conditions,” the defense official said.”