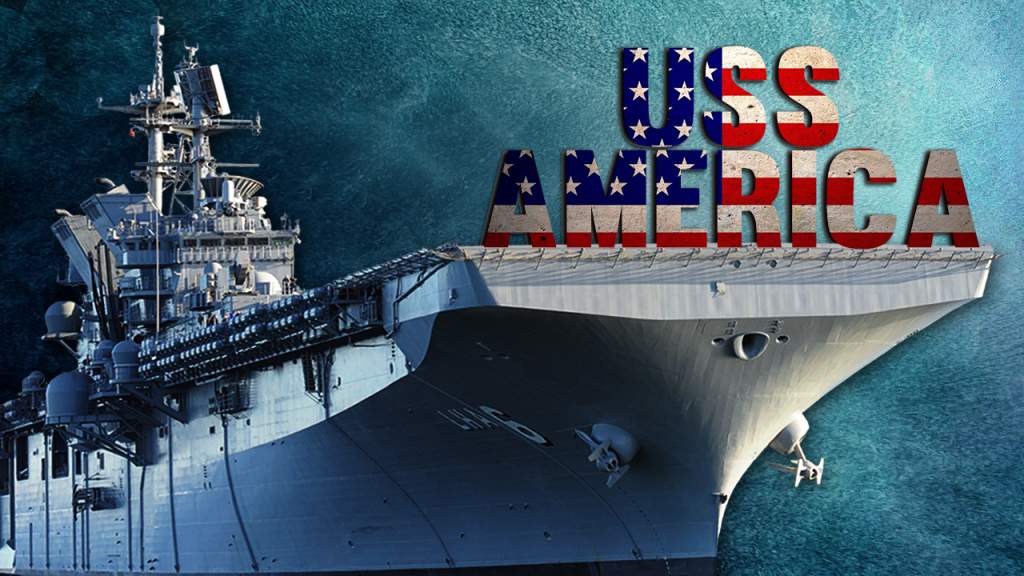 The USS America LHA-6 successfully completed combat systems ship qualification trials (CSSQT) on February 3rd, in preparation for its first overseas deployment at the head of the 15th Marine Expeditionary Unit/Amphibious Ready Group (MEU/ARG).The vessel went to sea several times in January to conduct training exercises in the run-up to its future deployment, testing different mixes of aviation assets to be fielded on the new class of ship. The USS America is classified as a Landing Helicopter Assault (LHA), and lacks a well deck to launch and recover LCACs or AAVs. The U.S. Navy and U.S. Marine Corps have to determine exactly how to best utilize the new vessel as an integrated component of an MEU/ARG.

There was no small amount of controversy over the new vessel when it was first proposed. Many senior officers in the USMC argued that an amphibious assault ship meant to head an MEU/ARG must have amphibious assault capability. Without a well deck, the new LHA cannot launch and recover marines via LCAC hovercraft, LCU landing craft or AAVs, and thus it possesses no inherent amphibious capability. This renders the vessel less flexible than a Landing Helicopter Dock (LHD) of comparable size, such as the USS Wasp Class. This new class of LHA will use the added space traditionally taken up by a well deck and heavy vehicle stowage for increased aircraft hangar space, and storage for aviation maintenance and fuel. The America will allow for the accommodation of an Air Combat Element (ACE) that is larger in number and of a different mixture of aircraft than a traditional MEU/ARG.

In apparent recognition of the need to remedy the lack of flexibility inherent in the current design, and to bring the America class back in line with the traditional USMC mission, only the USS America LHA-6 and the USS Tripoli LHA-7, which is currently under construction, will be built absent a well deck. Although larger in dimensions and displacement, the remaining six vessels planned will be brought more in line with the USS Makin Island LHD-8 from which it was originally based; however, their well deck will be smaller in size. In order to make up for the lack of amphibious capability of the USS America, the smaller amphibious vessels comprising the MEU/ARG will have to bear the responsibility of transporting the heavy equipment that marines may need to bring to any potential fight. Although equipped with some internal cargo and vehicle stowage space, the America can only discharge vehicles and stores while docked at a prepared shore facility. Lessons learned from the first overseas deployment of the vessel later this year, may result in the decision to add one additional LPD to any MEU/ARG fielding an LHA to bring amphibious strength up to an acceptable standard, or mandating that the LHAs must only be added to a traditional MEU/ARG if the mission calls for supplemental aviation capability.

The controversy surrounding the USS America LHA-6 and USS Tripoli LHA-7 is only exacerbated when considering the aviation elements that the vessel was designed to employ. The flight deck, internal hangars and elevators were designed to accommodate the V-22 Osprey and the F-35B Lightning II Joint Strike Fighter. Both aircraft have been the source of controversy for a multitude of reasons. Both aircraft programs have incurred massive cost overruns, have failed to perform as promised, and in the case of the Osprey, have achieved an infamous safety record. A total of 36 fatalities are associated with the aircraft, although 30 of these occurred in incidents and crashes prior to the aircraft becoming operational in 2007. After almost two decades of development, which incurred a cost overrun of 40% more than originally budgeted, the V-22 Osprey costs approximately $100 million USD per aircraft. By contrast, an MH-60S Seahawk or CH-53 Sea Stallion each costs roughly $28 million USD per unit; however, the V-22 achieves three to four times the range of either traditional rotary wing aircraft and can carry a far larger payload than the MH-60S.

The controversy surrounding the F-35 JSF is well known. The cost overruns, faulty systems, and poor performance of this $1.3 trillion USD and climbing aircraft program are embarrassing enough; however, flight testing of both the V-22 and the F-35 on the flight deck of the USS America have revealed that the deck may not be strong enough to withstand the high heat unleashed by their engines during continuous flight operations. This shortcoming will have to be remedied by strengthening the America’s flight deck and reengineering the flight decks of all following vessels in class, adding significant cost. The AV-8B Harrier, used by the USMC for over 30 years, has one Rolls Royce F-402-RR-408 vectored thrust turbofan that produces 23,500 lbf. of thrust. The F-35B Lightning II uses the Pratt & Whitney F135 engine, which can produce a maximum of 50,000 lbf. of thrust. The aircraft uses approximately 40,000 lbf. of thrust when taking off vertically.

The USS America will have to prove that it is not a dead-end in naval design. As the premier fighting force of the U.S. military services, and true to the unofficial motto, “Improve, Adapt and Overcome”, the USMC will work with any assets at their disposal. They will most likely excel, but until the vessel is proven in an actual military or humanitarian operation, the efficacy of such a design will be hard to determine. A return to a more balanced and flexible LHA design with the completion of USS Bougainville LHA-8, will eventually give the U.S. Navy and USMC a chance to compare the two vessels, put them both through their paces, and decide if the USS America was worth her $3.4 billion USD price tag.

The wisdom of providing a very specialized platform to carry U.S. Marines, who train to excel at all forms of warfare, whether by land, sea, or air, is questionable. The USMC has proven the most resistant of all U.S. military branches to misguided Department of Defense mandated changes in recent decades, and will undoubtedly continue to resist changes that they deem counterproductive to the Corps and their mission. In the meantime, they will do the best job they can with the tools they have been given.