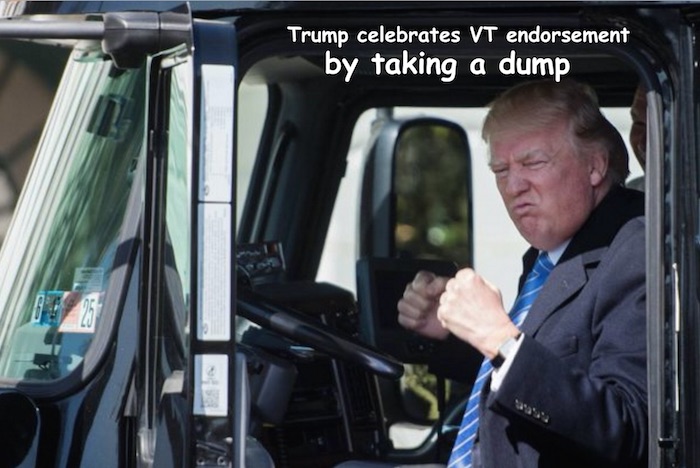 In a special April Fool’s Day emergency meeting, the editorial board at Veterans Today has spectacularly reversed itself and issued a ringing endorsement of Donald Trump.

“We are terribly, horribly sorry about the pain and anguish we have caused the Trump family by doubting the President’s integrity and qualifications,” said Managing Editor Jim Dean as Senior Editor Gordon Duff dangled him upside down outside the 11th floor window.

Duff added: “We really screwed the pooch on this one. Whoever would have guessed that Trump would make such a great president? Two months into his term, Donald Trump’s amazing accomplishments and skyrocketing popularity have forced us to admit that some of our seemingly not-so-bright readers were actually right all along. Why, oh why did we not listen to those morons in the comments section?”

The entire Editorial Board unanimously issued a statement congratulating President Trump for drawing by far the biggest crowd that has ever attended any presidential inauguration in history, pushing through what promises to be the best national health care plan in the world, successfully banning all Muslims from ever, ever entering the United States, slaughtering dozens of women and children in Yemen in revenge for the Bowling Green Massacre, bringing peace to Syria and Ukraine, expelling all 14 million illegal immigrants including Barack Obama, jailing Hillary Clinton, ending US tribute payments to Israel, balancing the budget, repatriating thousands and thousands of factories from China, creating millions of $30-an-hour-and-up working class jobs, effectively ending unemployment forever, disbanding Goldman Sachs and ending the Fed, and signing binding permanent peace treaties with all of the world’s leading nations, allowing the US to withdraw all of its forces from all 900-plus military bases occupying the world and use the money to rebuild America’s crumbling infrastructure.

“Never before has an American president accomplished so much during his first ten weeks,” said Ian Greenhalgh, formerly one of Trump’s fiercest critics. “It just goes to show you that Trump’s decades of experience as a pathologically narcissistic front-man for organized crime were perfect preparation for the White House. This guy knows how to make you an offer you can’t refuse. He gets things done.”

VT columnist Allen Roland chimed in: “Trump just loves being Trump. He exudes joy and exuberance! He really, literally has the heart of a small boy. He keeps it in a jar on his desk.” 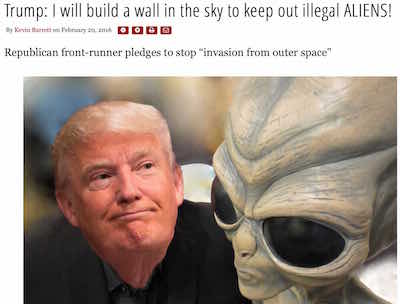 Another popular columnist, Preston James, added: “Trump has already won the Secret Space War by building a great, great  wall in the sky, very inexpensively, and making the aliens pay for it. The illegal aliens, especially the grays and their reptilian overlords, have all been deported, along with the Nazi and Zionist scientists responsible for reverse-engineering UFO technology and abducting millions of Americans to be ground up into spaceburgers sold in intergalactic fast food chains.”

The VT Board went out of its way to praise Trump’s eloquence on Twitter: “Lincoln’s Gettysburg Address, FDR’s fireside chats, and JFK’s soaring ‘ask not what your country can do for you’ oratory appear clumsy, ineffectual, inarticulate gagging and choking sounds when compared to the masterfully potent grandiloquence, nay, magniloquence, of the ineffable, incomparable and inimitable tweets of our magnificent President Donald J. Trump.”

Veterans Today has contacted the White House in hopes of acquiring the rights to issue a complete collection of Trump’s tweets in book form, a project that already seems a shoo-in for both the Pulitzer and Nobel prizes. The Editorial Board is also considering hiring a team of mountaineering stonecutters to carve Trump’s bust beside the four vastly inferior presidents already engraved upon Mt. Rushmore. 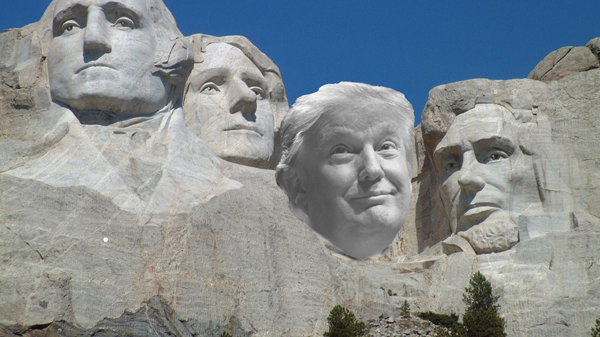