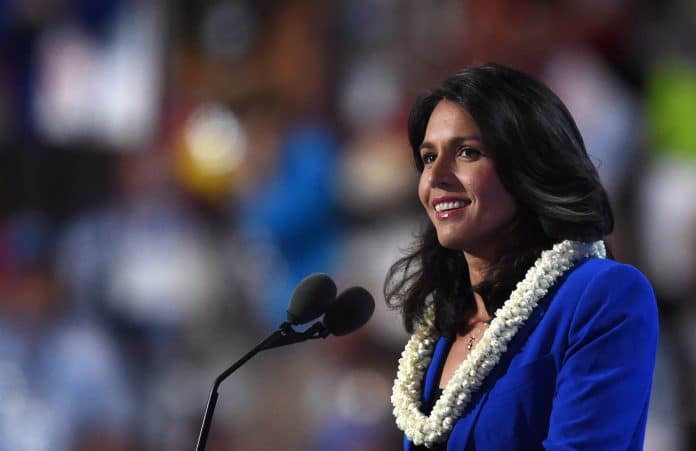 Ibrahim al-Amin, the editor-in-chief of Lebanon’s prestigious Arabic newspaper al-Akhbar, has claimed in his recent editorial [1] that Tulsi Gabbard, the United States Representative for Hawaii whose January trip to Syria and meeting with Bashar al-Assad was widely reported in media, had conveyed President Trump’s offer of cooperation to Assad during the meeting.

The editorial in Arabic is full of detailed accounts of Gabbard’s conversations with Assad, her airport handlers, security detail, etc. Although al-Akhbar newspaper generally takes the side of Assad regime against the Syrian opposition but its reporting over the years, particularly on the conflict in Syria, has been fairly balanced, insightful and highly credible.

Moreover, on the campaign trail, in his speeches as well as on TV debates with other presidential contenders, Donald Trump repeatedly mentioned that he has a ‘secret plan’ for defeating the Islamic State without elaborating what the plan is? To the careful observers of the US-led war against the Islamic State in Iraq and Syria, however, the outlines of Trump’s ‘secret plan’ to defeat Islamic State, particularly in Syria, are now getting obvious.

Unlike Iraq where the US is providing air and logistical support to Iraq’s armed forces and allied militia in their battle to retake Mosul from the Islamic State militants, the conflict in Syria is much more complex that involves the Syrian government, the Sunni Arab militant groups, the Kurds, Turkey and Russia.

Regarding the recapture of Palmyra from the Islamic State by the Syrian regime, a March 2 article in the Washington Post carried a rather paradoxical headline: “Hezbollah, Russia and the US help Syria retake Palmyra” [2]. The article by Liz Sly offers clues as to how the Syrian conflict might transform under the new Trump Administration.

Under the previous Obama Administration, the unstated but known policy in Syria was regime change, and any collaboration with the Syrian regime against the Islamic State was simply not on the cards. The Trump Administration, however, looks at the crisis in Syria from an entirely different perspective, a fact which is obvious from Donald Trump’s statements on Syria and more recently, from Ibrahim al-Amin’s testimony on Tulsi Gabbard’s message of cooperation from President Trump to Bashar al-Assad. Moreover, unlike the Obama Administration which was hostile to Russia’s interference in Syria, the Trump Administration is on friendly terms with Assad’s main backer in Syria, i.e. Russia.

It is stated in the aforementioned article by Liz Sly that the US carried out 45 air strikes in the vicinity of Palmyra against the Islamic State’s targets in the month of February alone, which must have indirectly helped the Syrian government troops and the allied Hezbollah militia to recapture Palmyra along with Russia’s air support.

Although expecting a radical departure from the six years-long Obama Administration’s policy of training and arming the Sunni Arab militants against the Syrian regime by the Trump Administration is unlikely. However, the latter regards jihadists as a much bigger threat to America’s security than the former. Therefore some indirect support and a certain level of collaboration with Russia and the Syrian government against radical Islamists cannot be ruled out.

Here, let me emphasize that President Trump has been in the office for only two months, it’s too early to predict his approach to the region once he has been fully briefed and has assumed a position of responsibility. His stance on the Middle East region and Syria in particular will unfold in the coming months and years.

What would be different in the respective Syria policy of the two markedly different US administrations, however, is that while the Obama Administration did avail itself of the opportunity to strike an alliance with the Kurds against the Islamic State in Syria and Iraq, but it was simply not possible for it to come up with an out of the box solution and use the Shi’a-dominated regime and allied militias against the Sunni Arab militant groups particularly the Islamic State.

The Trump Administration, however, is not hampered by the botched legacy of the Obama Administration in Syria, and therefore it might align itself with the Kurds as well as the Russians and the Syrian government against the Islamic State’s militants in Syria.

Two obstacles to such a natural alignment of interests, however, are: firstly, Israel’s objections regarding the threat that Hezbollah poses to its regional security; and secondly, Turkey which is a NATO member and has throughout nurtured several Sunni Arab militant groups during the six years-long conflict would have serious reservations against the new American administration’s partnership not only with the Russians and the Syrian government but also with the PYD/YPG Kurds in Syria, which Turkey regards as an offshoot of separatist PKK Kurds in southeast Turkey.

It would be pertinent to mention here that unlike the pro-US, Iraqi Kurds led by Masoud Barzani, the Syrian PYD/YPG Kurds as well as the Syrian government are also ideologically aligned, because both are socialists and have traditionally been in the Russian sphere of influence.

In August 2014, however, the US declared a war against one faction of the Sunni Arab militants, i.e. the Islamic State, when the latter overran Mosul and Anbar in June 2014, and the Obama Administration made a volte-face on its previous regime change policy and started conducting air strikes against the Islamic State in Iraq from where the occupying US troops had withdrawn only in December 2011.

After that reversal of policy by the Obama Administration, the Syrian Kurds took advantage of the opportunity and struck an alliance with the US against the Islamic State at Masoud Barzani’s bidding, thus further buttressing their position against the Sunni Arab militants as well as the Syrian government.

More to the point, for the first three years of the Syrian civil war, from August 2011 to August 2014, an informal pact existed between the Syrian government and the Syrian Kurds against the onslaught of the Sunni Arab militants, until the Kurds broke off that arrangement to become the centerpiece of the Obama Administration’s policy in the region.

Additionally, with Russia’s blessings, a new alliance between the Syrian Kurds and the Syrian government against the Sunni Arab militants has already been forged, and it would be a wise move by the Trump Administration to take advantage of the opportunity and to avail itself of a two-pronged strategy to liberate Raqqa from Islamic State: that is, to use the Syrian government troops to put pressure from the south and the Kurds to lead the charge from the north of the Islamic State’s bastion in Syria.

According to a March 22 article [3] by Michael Gordon and Anne Bernard for the New York Times, the US had airlifted hundreds of Kurdish-led Syrian Democratic Forces’ fighters and their American military advisers to take control of the Tabqa dam on the Euphrates River near Lake Assad, in order to cut off the western approaches to Raqqa.

Moreover, the Syrian government and the Syrian Democratic Forces (SDF) are already collaborating in Manbij where the Kurds have handed over several villages to the Syrian government troops in order to create a buffer zone and to avoid confrontation with the Turkish troops and the allied Sunni Arab militant groups, who have recently liberated al-Bab from the Islamic State.

Furthermore, Karen De Young and Liz Sly mentioned in a March 4 article [4] for the Washington Post that the Russian and the Syrian government’s convoys had already arrived in Manbij and the US government had been informed about the movement by the Russians.

In the same article, the aforementioned reporters have also made another startling revelation: “Trump has said repeatedly that the US and Russia should cooperate against the Islamic State, and he has indicated that the future of Russia-backed Assad is of less concern to him.” Thus, it appears, that the interests of all the major players in Syria have converged on defeating the Islamic State, and the Obama era policy of regime change has been put on the back burner.

2- Hezbollah, Russia and the US help Syria retake Palmyra:

3- The US Airlifts Hundreds of Militia Fighters in Attack to Cut Off Raqqa, Syria: