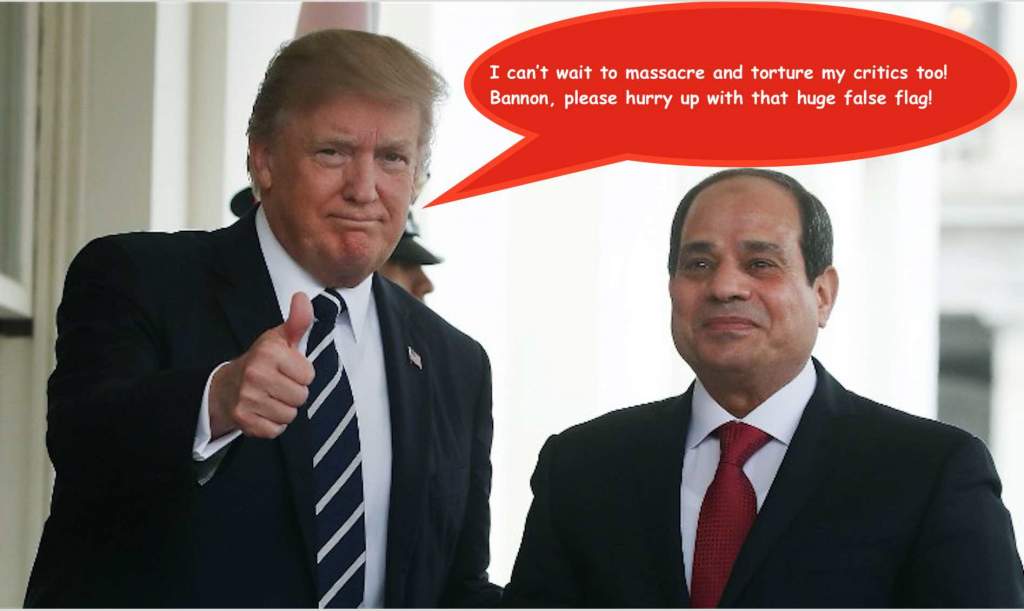 Donald Trump just welcomed Egyptian dictator al-Sisi to the White House. Their meeting, we are told, went well. And no wonder: The two have a lot in common.

*Both came to power by beating up on weak opponents: Trump owes his election to the loathesomeness of Hillary Clinton, while al-Sisi crushed a democratically-elected “government” that was never allowed to govern.

*Both are authoritarian personalities, thin-skinned narcissists who can’t handle criticism. (Al-Sisi tortures and  massacres his critics, while Trump just tweets his outrage – so far.)

*Both are lifelong front-men for organized crime. Trump’s “real estate” and “gambling” empires have all the earmarks of money-laundering enterprises (especially when we look into the background of Trump’s associates), while al-Sisi fronts for “the Egyptian military” which is actually a Zionist-run, US-taxpayer-funded organized crime syndicate controlling 40% of Egypt’s economy, whose main role is to rob, torture, and murder honest, patriotic Egyptians while allowing Israel to run the country. 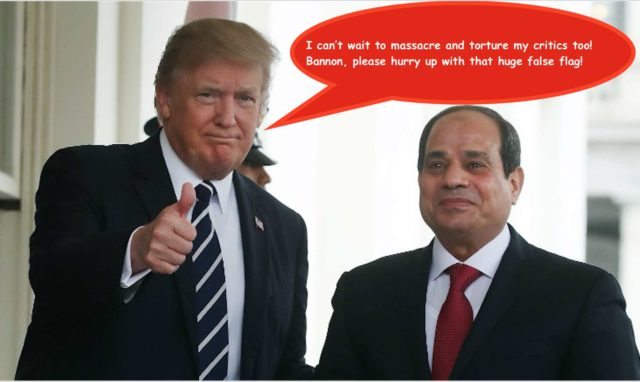 *Both are super-rich fake populists and fake nationalists, thumping their chests and pretending to side with “the Egyptian people” and “the American people” respectively, while in fact doing everything they can to accelerate the ever-worsening plunder of their people by criminal oligarchies.

*Both owe their political success to extreme hate-mongering and scapegoating. Trump whips up Orwellian hatred of Muslims and Mexicans to make working-class whites forget who is the real source of their problems (rich scumbags like Trump himself), while al-Sisi scapegoats the Muslim Brotherhood (the Islamic world’s leading pro-democracy civil society group).

*Both are extreme right-wing Zionists with Jewish-Zionist-extremist family connections. Trump’s daughter is Jewish, and his son-in-law Jared Kushner, a Jewish mafia princeling whose father served a prison term,  is a fanatical Zionist extremist. As for al-Sisi, he hails from a Moroccan Jewish family background; his uncle, Uri Sibagh (sometimes spelled as Sabbagh) served in the Jewish Defense League (Hamagein) from 1948 to 1950, made his aliyah to Israel, and became a bigwig in Ben Gurion’s political party, serving as the secretary of the Israeli Labor Party in Beersheba from 1968 to 1981. Uri’s sister – al-Sisi’s mother – presumably emigrated to Egypt on a mission from the Mossad. That mission culminated when the Mossad overthrew President Morsi and installed its agent al-Sisi in the coup d’état of July 3rd, 2013.

*Both are funded by Saudi Arabia. Trump has eight companies that do business there and is throwing love, money, and weapons at the Zionist-owned Saudis (who are presumably lavishing their standard kickbacks on Trump), while al-Sisi is raking in vast amounts of Saudi money to keep his crime syndicate afloat while he tortures and massacres pro-democracy Egyptians.

Bottom line: Both Trump and al-Sisi are Bibi Netanyahu’s puppets. They are two peas in a pod.