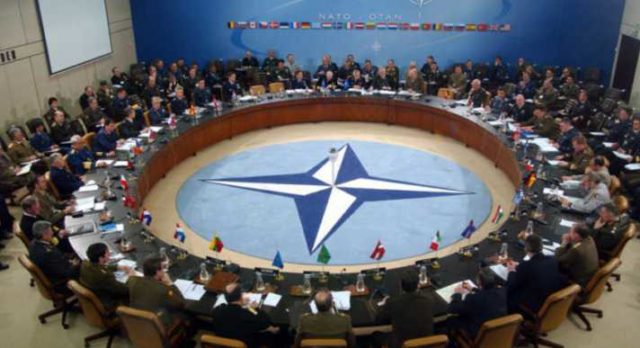 [ Editor’s Note:  We are seeing a consistent flow of good material on the sleeping giant geopolitical topic of our time, the fraud of America’s political and military establishments presenting themselves as the defenders of freedom and democracy when their record is exactly the opposite.

We have before us the modern equivalent of a much earlier version of Pax Americana, when the American Indian tribes in the Southeastern United States were forceably removed under the Indian Removal Act of 1830. Thousands perished along the grueling march to their new homes in the Arkansas and Oklahoma territories, forever known in their culture as “The Trail of Tears”.

This established what our young democracy was capable of, in this case wanting the gold that was discovered in Dahlonega, Georgia for a new country constantly struggling with its viable currency problems that were holding back development and trade. In the Cherokee Nation’s case, corrupt colonialists also wanted their already developed farmlands.

The US Pax Americana since the Bush Gangster day has left a much large trail of tears almost everywhere we have sought to remove the governments of various countries, basically for the same reason the Indians were removed. The political and business classes joined hand to control more and more economic interests under their control at the expense most of the time of people where were really not real threat to US security, but just ‘in the way” as the American Indians were.

Obama, and his crazy speech writer that came up with the “American Exceptionalism” term, rubbed salt in this historical wound, an audio attempt to spray air freshener into a slaughter house. And it seems Trump plans to outdo Obama. We see signs he his desperately pushing for a shooting war to divert attention from his growing closet of skeletons that could bring his administration down if they were thoroughly looked into.

The battle is on to stop that from happening as it would have a ripple effect that would bring others down with him, and a dark seamy side of America exposed to the light of day, for the first time.

These power have in the past made sure this never happened. And with Congress under control of the Citizen United financiers, which allows criminally obtained funds from all over the world to flow into out elections.

We are living through a dangerous time now. The craziness we see going on over what is clearly an contrived event by those supporting the terrorists in Syria who have been getting hammered during their Hama offensive, with the bogus claims of a Syrian Air Force sarin gas attack.

Missing in all the ranting and raving about is anyone asking the question of why would Syria make such a totally self defeating move when the Terror War has turned in their favor. There is not feasible justification, yet corporate media once again is rolling over on exposing this patent hoax story. We are back the to the widely discredited Aleppo fake news because no punishment was inflicted on the guilty media hype perpetrators before… Jim W. Dean ]

US foreign policy has for decades been predicated on achieving and maintaining global peace, security and stability. In reality, it has for over a century constituted an overreaching desire to achieve and maintain global hegemony.

And where US efforts focus on achieving hegemony, division and destruction follow. From the Middle East to Eastern Europe, and from Southeast Asia to the Korean Peninsula, US intervention politically or militarily all but guarantee escalating tensions, uncertain futures, socioeconomic instability and even armed conflict.

The Middle East and North Africa

US efforts in the Middle East since the conclusion of the first World War have focused on dividing the region, cultivating sectarian animosity and pitting neighbors against one another in vicious, unending combat. During the 50s and 60s, the US pitted its regional proxy, Israel, against its Arab neighbors. In the 1980’s the US armed both the Iraqis and the Iranians amid a destructive 8 year long war.

Today, the US props up Persian Gulf states who in turn are fueling regional, even global terrorism that has destabilized or entirely dismembered entire nations. And from the Middle East and North Africa, waves of refugees have reverberated outward affecting adjacent regions who have so far been spared from the chaos directly.

In Syria, the United States poses as a central player in restoring stability to the conflict stricken nation. In reality, it was the US itself that trained activists years ahead of the so called Arab Spring, as well as funneled money into the Muslim Brotherhood and other extremist groups to serve as militant proxies after the protests were finally underway. Today, militant groups operating under the banners of Al Qaeda and its various affiliates are almost exclusively funded, armed and trained by the Persian Gulf states through which the US launders its own support to these groups through.

Thus, while the US poses as an agent of  stability in Syria, it is the central player intentionally creating and perpetuating chaos.

Likewise, the North African state of Libya has been rendered all but destroyed, fractured into competing regions ruled by ineffective warlords, former generals, proxies of ever sort and Persian Gulf sponsored terrorist networks including the Islamic State. The instability in Libya has afforded the United States, its policymakers and the special interests who sponsor their work a safe haven for the vast infrastructure required to maintain regional proxy forces including training camps and weapon depots.

This infrastructure, since 2011, has been used as a springboard to invade Syria, destabilize neighboring North African states and to fuel a divisive refugee crisis in nearby Europe.

Since the conclusion of the Cold War and the collapse of the Soviet Union, NATO has continued to expand toward Russia’s borders. Far from a defensive alliance, NATO clearly serves as a multinational military conglomerate used as cover for expanding US hegemony worldwide.

NATO operations in far-flung Afghanistan and Libya illustrate the shape-shifting nature of its alleged mission statement, revealing it to be but a pretext for an otherwise unjustified, aggressive front.

Its expansion into Eastern Europe and the ongoing military build-up along Russia’s borders mirrors similar tensions fostered by Nazi Germany during the 1930s.

NATO’s sponsorship of the violent coup which overthrew the Ukrainian government between 2013-2014 likewise provides an example of how US “stability” often manifests itself instead as failed states, perpetual violence and the constant threat of further escalation.

Over the past 10 years, the United States has attempted to “pivot” itself back toward Asia. While claiming this “pivot” represented an American effort to maintain stability across Asia-Pacific, proclamations from the US State Department itself smacked of literal imperialism.

An article published in Foreign Policy titled, “America’s Pacific Century,” was penned by then US Secretary of State Hillary Clinton all but admitting this.

The United States is not an Asian nation, yet despite this obvious fact, it declared its intent to reassert American primacy across Asia Pacific. In order to do this, the US found itself fueling political opposition across much of Asia and more specifically, in Southeast Asia.

Nations like Myanmar are now headed by regimes installed into power via decades of US political support, funding and training. And despite pro-democracy rhetoric accompanying these regimes as they ascend into power, their true nature is nothing short of despotic, with Myanmar’s current government overseeing systematic violence targeting ethnic minorities, the silencing of political critics and opponents, the curtailing of free press and other flagrant abuses the US now conveniently ignores.

In nations like Thailand, US efforts to co-opt regional political orders have failed. However, despite their failure, simmering conflicts remain, threatening sociopolitical and economic stability both currently and in the near future.

On the Korean Peninsula, America’s presence continues to drive instability. Joint military exercises with South Korea often and openly serve as rehearsals for “decapitation” strikes against the North Korean government, fueling North Korean paranoia and provoking continued posturing on both sides. In short, the US presence serves to intentionally keep the neighboring states pitted against one another, undermining, not bolstering regional stability.

A similar strategy of tension is being played in the South China Sea where the US has for two presidencies now attempted to provoke China both directly and through the use of Japanese, Vietnamese and Philippine tensions to contest and curtail Beijing’s growing military deterrence.

The endgame in the South China Sea for China is to eventually push the United States out of the region, reducing or eliminating its capacity to target China directly, and reduce America’s ability to destabilize China’s peripheries. It should be noted that destabilizing China’s peripheries (those nations bordering China) is a stated objective of US policymakers.

Hegemony or Stability, Not Both

Ultimately the US seeks hegemony, not stability. Hegemony by necessity requires the division and destruction of competitors, which in turn requires constant and ever-escalating sociopolitical and economic instability. While the US has all but declared its intent to establish global hegemony for decades, it uses the pretext of seeking global peace, security and stability as cover along the way.

Understanding that only through a multipolar global order in which state sovereignty holds primacy, not multinational alliances, institutions or openly hegemonic world powers, can a real balance of power be struck, and only through this balance of power can real global stability be achieved. Until then, as the US seeks hegemony over the planet, the world can expect an equal but opposite decline in stability.