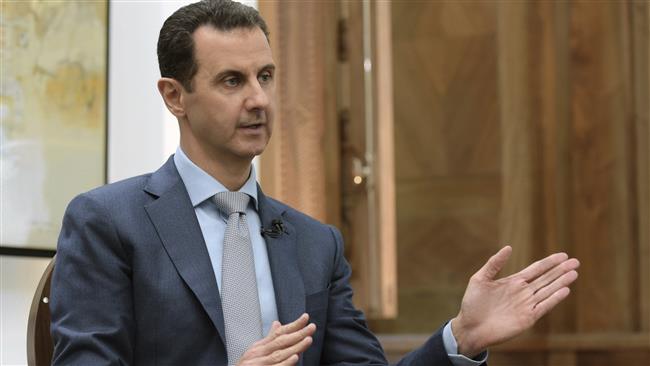 [ Editor’s Note: Well, better late than never. This interview by Assad is the strongest and most comprehensive I can remember seeing, in terms of the powerful Western countries he lists in his verbal “perp walk” of who the terrorists are in Syria. VT has been urging the Syrian government to be much more detailed in its denouncements, since they have nothing to lose really.

We have also recommended that they publicize information, particularly the POW officer list they have, such as photos, ID’s, and for what activities they were captured. For some mysterious reason, Syria has been holding back on this. But those of us trying to motivate Western publics to protest their governments’ direct and indirect support of the terrorism in Syria have been hampered by not having this detailed and powerful information to use.

Russia also has been holding cards back in Syria. For example, during the post-Ukrainian coup period, Russia released the phone intercepts between Victoria Nuland and the foreign minister of Lithuania, where they evaluated their picks for the new Ukraine post-coup government. And later came the intercepted Yulia Tymoshenko call, where she stated that she wanted to nuke all the Russians in Donbass and then move on to Russia proper.

These releases prompted a huge public reaction and exposed the dark heart of the US-EU-NATO coup in Ukraine and the puppet leaders that were being pushed forward. We had expected these kinds of intercept releases from Russia to continue, but they just stopped, even after the MH-17 flight was taken down.

We have a similar situation now, with Turkey coordinating with the US coalition to try to lasso a victory out of the Syrian peace talks. This has resulted in what we had feared, the continued Balkanization creep of Syria. A strong southern offensive was launched out of Jordan, while Erdogan prepared for his strike to take Hama and announcing he would be occupying NE Syria as long as he pleased.

The US for its part, is pushing forward with putting more and more US troops on the ground in NE Syria, and building the infrastructure needed for even more. The future peace talks will take place with both Turkey and the US coalition having pistols on the table.

The diplomatic dance between Russia and Iran with Turkey will eventually produce a winner and loser. Assad and the SAA have solidified control over larger areas of their own country, but so have the state-sponsored terrorists and their Western supporters.

We see the flood of TOW missiles that have flowed in from Turkey and Saudi Arabia which have killed a lot of Syrian armor and troops. We fear this war of attrition, where advanced American weapons are miraculously appearing in the hands of both acknowledged terrorists and “opposition” hands will result in a continued war of attrition… Jim W. Dean ]

Syrian President Bashar al-Assad says the bloody militancy plaguing his homeland is aimed at protecting the common interests of Israel and its partners, stressing that the “only option” left to save the nation is “victory” against foreign-backed terrorists.

“You can assume in any case that these terrorists are fighting for Israel. Even if they are not a regular Israeli army, they are still fighting for Israel. And Israel shares the objectives with Turkey, the United States, France, Britain, Saudi Arabia, Qatar, and other states. They all share the same objective,” Assad said in an interview with Croatian newspaper Vecernji published on Thursday.

“Israel is doing its best to support these terrorists in every place the Syrian army advances. They attack in one way or another in order to provide support to the terrorists and in order to stall the momentum of the Syrian Arab Army in facing them,” he added.

In response to a question as to whether there is hope for an end to the war, Assad said, “Of course, for without hope neither the country, nor the people, nor the state could withstand six years of an extremely ferocious war supported by tens of regional and Western countries, some of the wealthiest and most powerful countries in the world.”

The president said that Damascus has sought to “turn this hope into reality” by “fighting terrorism,” on the one hand, and “achieving reconciliations with all those who want to lay down their weapons,” on the other hand, and noted, “There has been progress on both fronts.”

Victory ‘sole option to keep Syria on the map’

The Syrian head of state further said there is no “option except victory” in the war against terrorism, stressing, “If we do not win this war, it means that Syria will be deleted from the map. We have no choice in facing this war, and that’s why we are confident, we are persistent and we are determined.”

Assad lashed out at the West for using the pretext of war on terrorism as a tool to achieve its political objectives, saying, “They do not fight it (terrorism)…The fact of the matter is that they use terrorism as a card to achieve different political agendas, even when this terrorism backfires and claims victims in their own countries. But they do not acknowledge this fact.”

“Europe, or a number of European countries, support terrorists on a large scale, send to Syria tens of thousands of terrorists, or support them directly and indirectly, logistically, with arms, money, political cover, and everything,” Assad pointed out.

The Syrian president slammed the unauthorized US airstrikes in Syria as part of Washington’s policy to secure its foothold in the country, adding, “In general terms, the American policy is based on creating chaos in different parts of the world and creating conflicts among states.”

“Through these conflicts, it secures a foothold through the contradictions and through its proxies who are already there but were able to become prominent because of the new circumstances. And then it takes part in bargaining in order to secure its interests in that region,” he added.

Syria has been gripped by foreign-sponsored militancy since March 2011. United Nations Special Envoy for Syria Staffan de Mistura estimates that over 400,000 people have been killed in the conflict. The UN has stopped its official casualty count, citing its inability to verify the figures it receives from various sources.