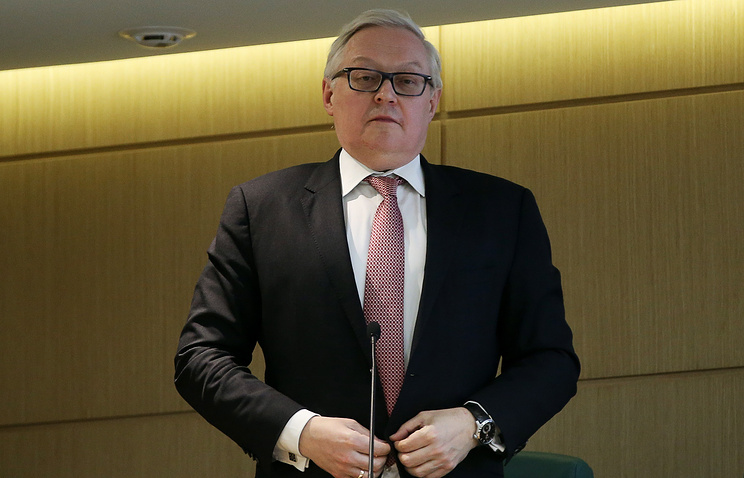 “We insist, and we state this with full confidence, that no chemical weapons were used in any form, be it toxic substances, be it homemade chemicals like chlorine, which were allegedly used by someone and at some point in Syria. Nothing of the kind occurred.”

“According to our information, as the Russian Defense Ministry said, a workshop where militants manufactured landmines stuffed with chemical agents, which were used by terrorist groups, was hit. There are reasons to believe that they will be used not only in Syria, but in Iraq as well,” Ryabkov added.

Russia will not trust ‘quasi-experts’ ‘opinion of Idlib incident

Moscow will not trust any conclusions regarding the suspected chemical weapons incident in Syria’s Idlib province that will be made only by Western experts, Ryabkov said.

“We are against distance investigations – by means of collecting depositions by the notorious White Helmets, who have utterly discredited themselves as fake-makers pursuing geopolitical aims,” Ryabkov said. “We are against using claims by the so-called London-based Observatory for Human Rights in Syria as a basis for any charges.”

“If a decision is made and the international community agrees that a fact-finding trip by OPCW specialists to the scene of the incident is possible and necessary, then the group must incorporate delegates from countries that represent not just the so-called group in the UN Security Council. We distrust the quasi-experts the governments of a number of Western countries, including the United States, dispatch there and then dictate to these specialists conclusions that are targeted against Damascus for political reasons. What impartial and professional investigation can one expect in a situation like this?” Ryabkov asked.

Investigation should be conducted on the ground

The investigation into the Khan Shaykhun incident should be conducted on the ground and be controlled by the Organization for the Prohibition of Chemical Weapons (OPCW), Ryabkov said.

“We insist on conducting an impartial investigation controlled by the OPCW,” he said. “The OPCW has all the necessary tools for that, it can send special missions there so that experts figure out what happened.”

“We are against a remote investigation that would be conducted by collecting information provided by the so-called ‘white helmets’ who have discredited themselves by producing staged videos for achieving political goals,” the Russian diplomat stressed. “We are also against using reports by the London-based Syrian Observatory for Human Rights to make any accusations.”

On Tuesday, Reuters cited the London-based Syrian Observatory for Human Rights saying that an airstrike on Syrian’s town of Khan Shaykhun had killed 58 people including 11 children. Reuters alleged that the chemical attack could have been carried out by “Syrian government or Russian jets.” The World Health Organization said in a statement that “at least 70 people have died and hundreds more have been affected.”

The Russian and Syrian militaries denied their involvement in the attack. Russia’s Defense Ministry later said that on April 4, the Syrian air force had delivered an airstrike on the eastern outskirts of Khan Shaykhun to destroy militant facilities used to produce chemical bombs. These bombs were sent to Iraq and were previously used in Aleppo.