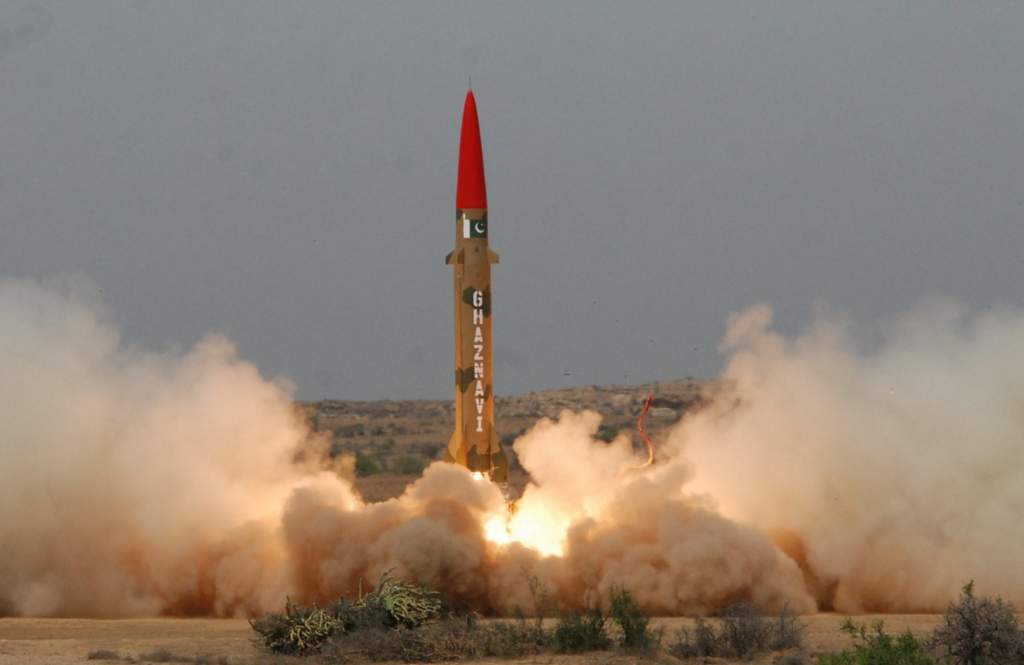 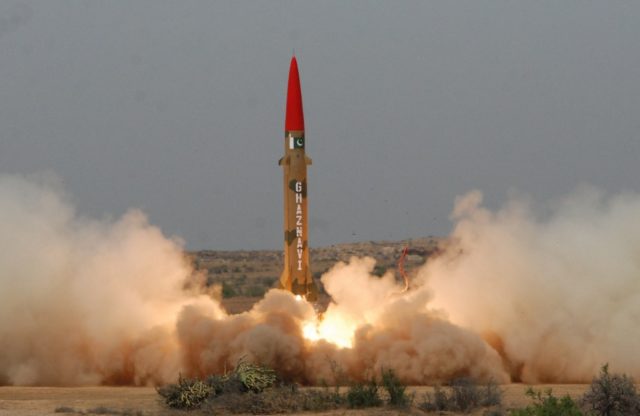 Recently, Pakistan’s former army chief, General Raheel Sharif, has been appointed to lead a 40 member military alliance of Muslim nations dubbed as “the Muslim NATO.” Although the ostensible purpose of the alliance is to combat terrorism but in fact, the alliance of Sunni Muslim nations has been cobbled together by Saudi Arabia as a counterweight to Iran’s meddling in the Arab World.

Moreover, it should be kept in mind that Pakistan’s military and Saudi Arabia have very deep and institutionalized ties: thousands of Pakistani retired and serving army officers work on deputations in the Gulf Arab States. Furthermore, during the ‘80s, when Saudi Arabia lacked an efficient intelligence set-up, Pakistan’s Inter-services Intelligence (ISI) virtually played the role of Saudi Arabia’s foreign intelligence service.

More to the point, before the signing of the Iran nuclear deal in July 2015, BBC’s defense correspondent, Mark Urban, published a report [1] that Pakistan’s military had made a clandestine deal with Saudi Arabia that in the event of Iran developing a nuclear weapon, Pakistan would provide ready-made nuclear warheads along with delivery systems to Saudi Arabia.

Similarly, in 2004, it emerged during the investigation of Pakistan’s top nuclear scientist, Dr. Abdul Qadeer Khan, who has been dubbed as “the Father of Pakistan’s nuclear program” that he had sold centrifuge designs to Iran, Libya and North Korea.

Additionally, in recent years, Pakistan’s defense production industry, with Chinese assistance, has emerged as one of the most sophisticated military-industrial complex in the region. Not only does it provides state-of-the-art conventional weapons to the oil-rich Gulf States, but according to a May 2014 AFP report [2], Pakistan-made weapons had also been used in large quantities in the Sri Lankan Northern Offensive of 2008-09 against the Tamil Tigers.

Keeping this background of Pakistan’s military’s mercenary activities in mind, when Saudi Arabia and UAE launched an offensive in Yemen in March 2015, they added Pakistan’s name to the list of coalition battling the Houthi rebels without even bothering to inform Pakistani authorities, and they simply sent a note to Pakistan’s military’s top brass that your services are required in the conflict.

Pakistan’s civilian parliament, however, passed a joint resolution against Pakistan’s involvement in an essentially sectarian conflict between Iran and the Gulf Arab States, thus preventing the deployment of Pakistan’s troops in the conflict in Yemen.

Historically speaking, from the massacres in Bangladesh in 1971 to the training and arming of jihadists during the Soviet-Afghan war throughout the ‘80s and ‘90s, and then launching ill-conceived military operations in Pakistan’s tribal areas under American pressure, which led to the displacement of millions of Pashtun tribesmen, the single biggest issue in Pakistan has been the interference of army in politics. Unless Pakistanis are able to establish civilian supremacy in Pakistan, it would become a rogue state which will pose a threat to the regional peace and its own citizenry.

Regarding the Kashmir dispute, there can be no two views that the right of self-determination of Kashmiris must be respected; and I am also of the opinion that Pakistan should lend its moral, political and diplomatic support to the Kashmiri cause; but at the same time, I am strongly against the militarization of any dispute, not just Kashmir.

The insurgency in Kashmir erupted in the fateful year of 1984 of the Orwellian fame, when the Indian armed forces surreptitiously occupied the whole of Siachen glacier, including the undemarcated Pakistani portion. Now we must keep the context in mind: those were the heydays of the Cold War and Pakistan’s military’s proxies, the Afghan so-called “mujahideen” (freedom fighters), were winning battle after battle against the Soviet army and the morale of Pakistan’s army’s top brass was touching the sky.

Moreover, Pakistan’s national security establishment also wanted to inflict damage to the Indian armed forces to exact revenge for their humiliation in the Bangladesh War of 1971, when India took 90,000 Pakistani soldiers as prisoners of war. All they had to do was to divert a fraction of their Afghan jihadist proxies towards Kashmir to light the fires of insurgency in Kashmir.

Notwithstanding, for the half of its 70 years-long history, Pakistan was directly ruled by the army and for the remaining half, the security establishment kept dictating Pakistan’s foreign and security policy from behind the scenes. The outcome of the first martial law (General Ayub: 1958-71) was that Bengalis were marginalized and alienated to an extent that it led to the dismemberment of Pakistan; during the second decade-long martial law (General Zia: 1977-88), Pakistan’s military trained and armed its own worst nemesis, the Afghan and Kashmiri jihadists; and during the third martial law (General Musharraf: 1999-2008), Pakistan’s security establishment made a volte-face under American pressure and declared a war against their erstwhile proxy jihadists that lit the fires of insurgency in the tribal areas of Pakistan.

Although most political commentators in Pakistan nowadays hold an Islamist general, Zia-ul-Haq, responsible for the jihadist militancy in tribal areas; however, it would be erroneous to assume that nurturing militancy in Pakistan was the doing of an individual scapegoat named Zia; all the army chiefs after Zia’s assassination in 1988, including Aslam Beg, Asif Nawaz, Waheed Kakar, Jahangir Karamat and right up to General Musharraf, upheld the same military doctrine of using jihadist proxies to destabilize the hostile neighboring countries, Afghanistan, India and Iran, throughout the ‘90s.

A strategic rethink in Pakistan army’s top brass took place only after 9/11, when Richard Armitage threatened General Musharraf in so many words: “We will send you back to the Stone Age unless you stop supporting the Taliban.”

Thus, the deliberate promotion of Islamic radicalism and militancy in the region was not the doing of an individual general; rather, it was the well-thought-out military doctrine of a rogue institution. The military mindset, training and institutional logic dictates a militarist and offensive approach to foreign affairs and security-related matters. Therefore, as a matter of principle, military must be kept away from the top decision-making organs of state.

Regarding the mercenary nature of Pakistan’s military, the annual budgetary allocation for defense roughly amounts to a quarter of the federal budget, but Pakistan army also operates its own business empire: from myriads of industries like Fauji Fertilizers and Askari Bank and Cement to the most lucrative real estate business carried out by the Defense Housing Authority (DHA). All the major cities of Pakistan are scattered with numerous sprawling military cantonments and DHA’s housing colonies for the officers of Pakistan’s armed forces.

The profits earned from this business empire are not included in the aforementioned budgetary allocation. Apart from that, Pakistan army has also been getting $1.2 billion every year from the American Coalition Support Fund for the last decade or so for its partnership with the US in the latter’s dubious “war on terror” policy. If we add up all that, Pakistan’s “East India Company” really is an unaffordable white elephant. And I don’t mean “East India Company” in a metaphorical sense, they literally are Pakistan’s indigenous colonizers.

The army officers have their own separate barricaded housing colonies and cantonments where the natives aren’t allowed to enter. They operate their own network of schools, colleges and universities for the children of army officers. They also run their own hospitals, like the Combined Military Hospitals (CMH), in all the major cities of Pakistan. The British colonizers in India also established separate housing colonies and cantonments, missionary schools and hospitals. In more than one ways, Pakistan’s army is like the British East India Company.

If the armed forces of a country are entitled to abrogate “a piece of paper,” known as the constitution under the barrel of a gun then by the same logic, thieves and robbers are also entitled to question the legitimacy of civil and criminal codes, which derive their authority from the constitution. To conclude this essay by another apt analogy, consent is the only element that differentiates rape from consensual sex, thus ruling a country without the consent and participation of the masses is nothing short of the rape of a nation.

[2] Pakistan-made arms were used against Tamils in Sri Lanka: