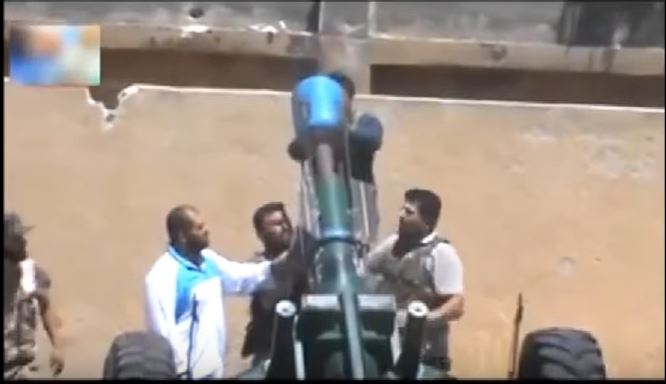 Updated: With the UN Security Council meeting this morning, many of the links in this story tell the reality of the chemical attack that was conducted by the rebels in 2013. It is no surprise that the gas came through Turkey then and possibly now. http://www.veteranstoday.com/2017/04/07/proof-turkey-did-2013-sarin-attack-and-did-this-one-too/ What is infuriating is the Left in the US who are jumping on board with the “war party” that may cost America’s standing and facilitate global jihadism/terrorism in the future. If those in the war party where to get all they want, Syria would become a weak Wahhabist state, a base from which terrorists could have the ability to attack any country, globally. At some point, the US should ask itself why is this reality being favored? Why, yet again, are they not favoring unbiased investigations into the “gas attack” claim? – Ann

Nothing is left to surprise anymore, again this morning a segment aired on “Democracy Now” featuring an “opposition supporter” Lina Sergie Attar of the Karam Foundation discussing the situation in Syria, again blaming the Bashar al-Assad Government for the most recent gas attack and “barrel bombs.”

We have heard this story before. Only now they are trying again to make it fly. It has already been debunked.

What is curious about the group is that last September, the Jewish United Fund of Metropolitan Chicago, a group that has been channeling hundreds of thousands of dollars into the coffers of anti-Muslim groups according to AlterNet, would choose to host both “the opposition-aligned Karam Foundation and the Syrian American Medical Society, which it says was aimed at addressing the “Humanitarian crisis in Syria.”

We all know their sordid history, and not only VT readers but many in the alternative media know. One only has to revisit an earlier “Democracy Now” interview with Dr. Zaher Sahloul, the former President of the Syrian American Medical Society. This accompanied the global media coverage of the bombed, bloodied and beaten little boy from Aleppo, apparently rescued from what was left of a makeshift refugee camp.

At one time Democracy Now was a respected alternative media site. Unfortunately, this is no longer the case, and it is even worse than that. You can see this NEO article for more background, Dead Children, the Syrian-American Medical Society (SAMS) and its Friends.

VT readers will find lots of other supporting documentation, for instance, one just needs to revisit the extensive research that was done on the Syrian American Medical Society, and its founder Dr. Zaher Sahloul:

Doctors of Death: Syrian doctors in the US and their CIA-ISIS ties

Doctors of Death: Syrian doctors in the US and their CIA-ISIS ties

“As one Syrian expert living in the United States shared with me, ‘I know this doctor [Sahloul] personally. He is a Muslim Brotherhood member and is sympathetic to the sectarian rebel groups inside Syria, they shouldn’t even be called rebels because what they really are, are terrorists. Dr. Sahloul is the biggest bullshitter and don’t be fooled by his propaganda.’

“ ‘Ask yourself this most basic question – what does the Syrian Army and Russia have to gain from bombing innocent children in hospitals? Nothing! The only people who gain anything out of this are the rebels who are purposely shelling and bombing civilians and then blaming it on the government, in order to fool you and gain support from Western nations.

“They are trying to illicit a military response, or if not that, more arms and funding. Dr. Sahloul’s basic goal is far from innocent; his goal is to have American military intervention in the form of a no-fly zone. He wants more military supplies to aid terrorists in Aleppo. He is also a sympathiser with Jaysh al Fatah, an Idlib-based terror organisation.”

Now in comes a new organization featured on Democracy Now, the Karam Foundation, a stand in proxy as in a team tag match. This is another interesting can of worms to open with more to come.

It is not surprising that the group does not disclose their donors, their 990 forms are available online and are linked here.

Both organizations seem to work in tandem “tag teaming” as they not only participated in the JUF event, they also both spoke to another Quaker Event in Chicago.

Yet again at a critical time, Democracy Now comes out to support war in Syria on “humanitarian grounds,” R2P, even though there is no proof that the Syrian Government was behind the gas attack and the person it chooses to interview could easily be seen as a propagandist for the opposition.

Veterans Today thoroughly debunked the Ghouta attack as being one conducted by the “rebels” on the civilians. This is why there were no boots on the ground in Syria last time. Obama admits VT was right on Syrian gas attacks.

Perhaps they could not have the Syrian American Medical Association on because of the work done by Veterans Today? People need to call out Democracy Now on its choice of guests as it continues to promote war in Syria. Its agenda is based on unfounded mainstream accusations with a specific outcome in mind.

Democracy Now can no longer parade itself as an alternative media site that considers itself an “Exception to the Rulers.” Perhaps it is just “exceptional to the rulers.” Beware, we are continuing to monitor their stories to let our readers know the flagrant propaganda at play within those who consider it “real alternative news” while it currently features propagandists who are members of the party of war.