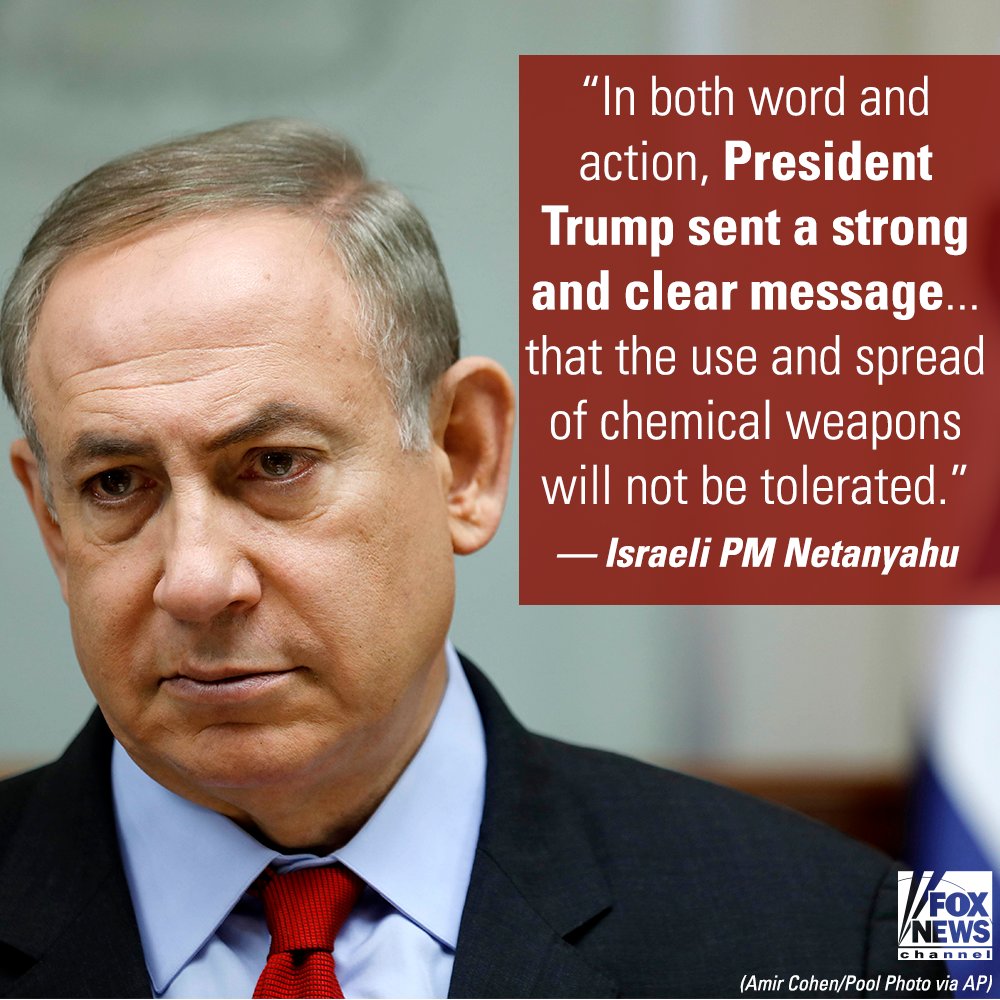 If you haven’t realized that the Israeli regime and its puppets in the United States want to start World War III, then you need to wake up from your dogmatic slumber. The Neocons and flaming Zionists are already gloating because Trump is currently doing their bidding.[1]

Fareed Zakaria, a staunch critic of Trump (he once said that Trump is a “cancer of American democracy”), is now saying that

“I think Donald Trump became president of the United States. I think this was actually a big moment because candidate Trump had said that he would never get involved in the Syrian civil war, he told President Obama you cannot do this without the authorization of Congress, he seemed unconcerned with global norms. President Trump recognized that the president of the United States does have to act to enforce international norms, does have to have this broader moral and political purpose.

“I think what’s interesting is the way in which he justified his actions. For the first time as president, he talked about international norms, international rules, America’s role in enforcing justice in the world. It’s the kind of rhetoric we’ve come to expect from American presidents since Harry Truman. There’s been an interesting morphing and a kind of education of Donald Trump.”

MSNBC host Brian Williams called US missiles in Syria “beautiful.” He said: “We see these beautiful pictures at night from the decks of these two U.S. Navy vessels in the eastern Mediterranean. I am tempted to quote the great Leonard Cohen: ‘I am guided by the beauty of our weapons.’”

“This strike will save lives—in Syria, by preventing Assad from daring to use chemical weapons again, and in unknown future conflicts where the losing side will be tempted to employ chemical weapons, and will think twice and not do it. Trump saved more lives in Syria by his action this week than Obama did in all his years in office….

“Vladimir Putin will think again about his relations with the United States, and will realize that the Obama years of passivity are truly over. Allies and friends will be cheered, while enemies will realize times have changed. When next the Iranians consider swarming around an American ship in the Gulf, they may think again.

“Of course this was an easy lift militarily: a few dozen missiles, one air base as a target. Yet our previous president refused to do it; this one acted. He did not let worries about the possible Russian reaction scare him off. He understood that this would not end the war in Syria, but he did it anyway. He was willing to act alone, without demanding a UN Security Council meeting or congressional vote.”[2]

Abrams has just taken the Zionist cat out of the bag here. What he is implicitly saying is that the Trump administration is Israel’s puppet—at least when it comes to foreign policy. Trump is a phony precisely because he told his supporters that he was going to take America out of perpetual wars in the Middle East, and now he is doing the exact opposite. Last year, Trump once tweeted that Obama needed to use caution when it came to attacking Syria. He wasn’t kidding:

“The President must get Congressional approval before attacking Syria-big mistake if he does not! What I am saying is stay out of Syria. If Obama attacks Syria and innocent civilians are hurt and killed, he and the U.S. will look very bad!”

There is more—and the capitalizations are all his:

“AGAIN, TO OUR VERY FOOLISH LEADER, DO NOT ATTACK SYRIA – IF YOU DO MANY VERY BAD THINGS WILL HAPPEN & FROM THAT FIGHT THE U.S. GETS NOTHING!”

“President Obama, do not attack Syria. There is no upside and tremendous downside. Save your ‘powder’ for another (and more important) day! Why do we keep broadcasting when we are going to attack Syria.

“Why can’t we just be quiet and, if we attack at all, catch them by surprise? No, dopey, I would not go into Syria, but if I did it would be by surprise and not blurted all over the media like fools. If we are going to continue to be stupid and go into Syria (watch Russia), as they say in the movies, SHOOT FIRST AND TALK LATER!”[3]

Who is being stupid now?

Trump is obviously acting like a fool and a complete idiot who hasn’t realized that his previous statements have been recorded.[4] As Gordon Duff has recently pointed out, “there is no history of Syria using chemical weapons against its own people, never happened.” And using colossal lies and blatant fabrications to attack Syria, Trump has just fallen into the able hands of the Israeli regime, which vowed to remove the Assad government from power in the first place.

“Yisrael Katz, Israel’s intelligence minister and a member of the Cabinet’s defense forum, said in a Friday interview that US defense officials ‘updated Israel in real time’ about the strike. Israel was a vocal proponent for military action in response to the alleged gas attack in Idlib province on Tuesday.”

I am inclined to believe (though I do not have evidence to support this) that Trump has observed the essentially diabolical power of Israeli Lobby and the Neocon power in Washington and that it is too strong for him, and therefore he cave in to the Neocons’ perpetual wars.

As I said in a previous article, Trump is just another Woodrow Wilson, who knew what to do when it came to foreign policy but had to surrender to the Powers That Be. Wilson lamented:

“They know that there is a power somewhere so organized, so subtle, so watchful, so interlocked, so complete, so pervasive, that they had better not speak above their breath when they speak in condemnation of it.”[5]

Wilson, like Bush and even Obama after him, was obviously being used like a puppet in an ideological experiment. And here Wilson perceived that the oligarchs always end up ruling the majority. So, who was ruling Wilson? Who was he working for?

Wilson was basically working for Paul Warburg and Jacob Schiff. Schiff in particular always looked for fresh blood and always wanted to ignite wars. He was wealthiest Jewish banker in the world at the time and hated the Tsarist government. He called Russia “the enemy of all mankind,”[6] and even financed plots against them.

Schiff “was hostile to Russia until 1917. According to the Jewish Encyclopedia, Schiff ‘belonged to the most important creditors of both his own and many foreign governments, part of which was the 200 million dollars which he lent to Japan during the Russo-Japanese war in 1904-5.’”[7] Schiff also financially supported both Trotsky and Lenin and subversive movements in Russia. As G. Edward Griffin documents in his book The Creature from Jekyll Island:

“The Bolshevik Revolution actually was financed by wealthy financiers in London and New York. Lenin and Trotsky were on the closest of terms with these moneyed interests both before and after the Revolution….

“One of the greatest myths of contemporary history is that the Bolshevik Revolution in Russia was a popular uprising of the downtrodden masses against the hated ruling class of the Tsars. However, the planning, the leadership and especially the financing came entirely from outside Russia, mostly from financiers in Germany, Britain and the United States…

“Jacob Schiff was head of the New York investment firm Kuhn, Loeb and Co. He was one of the principal backers of the Bolshevik revolution and personally financed Trotsky’s trip from New York to Russia. He was a major contributor to Woodrow Wilson’s presidential campaign and an advocate for passage of the Federal Reserve Act.”[8]

As the saying goes, those who don’t know the past are doomed to repeat it. And Trump is just repeating history by deliberately conniving with the Israeli regime and the Neocons in America. His so-called “America First” was just a pipe dream.

And if Trump is willing to dump those who have voted for him within the first three months of his candidacy,[9] what will happen within a year? Will he continue to kill Israel’s enemies in the Middle East? Will he help Israel create World War III?

[5] Woodrow Wilson, The New Freedom: A Call for the Emancipation of the Generous Energies of a People (New York: Doubleday, 1913), 13.