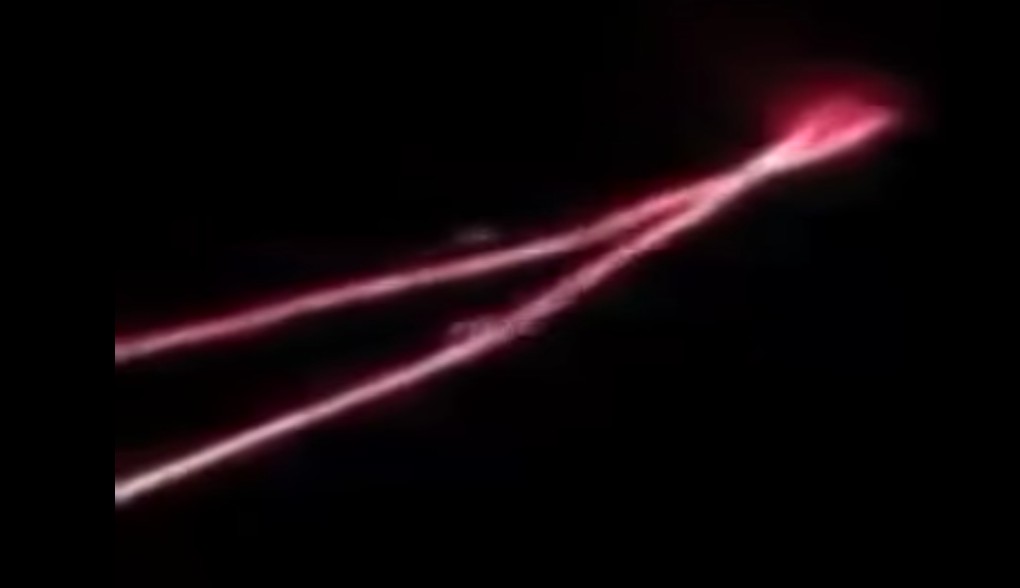 Editor’s note:  It is OK for an American to feel good, elated even, if something evil “done in our name” fails.

Breaking:  Since putting this story up, Syrian officials agreed to talk to us about this.  The reason this story was withheld is explained below, but as “the gloves are off,” we are going public.  America’s failure to upgrade its cruise missiles, to harden them against modern ECM and to assume that Syria was defenseless is only part of the story.  We might remind readers of the USS Donald Cook as well.  America is lucky it didn’t have to tow its two destroyers home, after all, it has happened before.

The last time the US went against Russian ECM, 27 crew members of the USS Donald Cook asked to be “relieved.” Mutiny is a better term.  Then there is this epic fail, the RQ 170 Lockheed drone that ECM brought down over Iran: 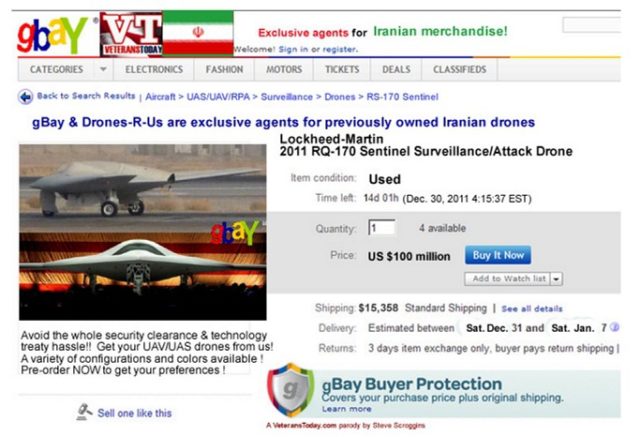 Below is a photo submitted by the Russian Center for Feril Studies FCFS, of the system used to down US cruise missiles: 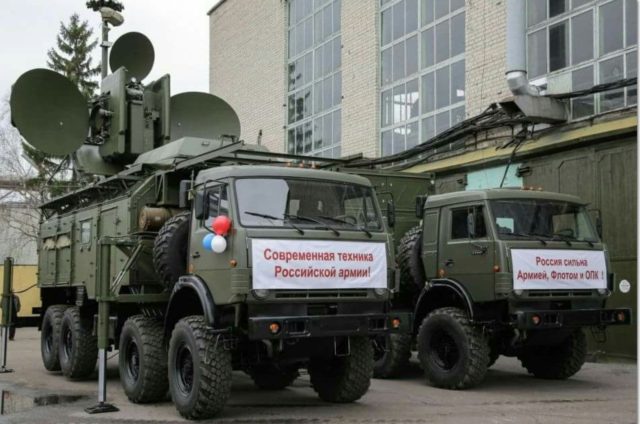 Confirmed as true through personal sources in the Syrian security services.  Electronic countermeasures were used along with missile interceptions.  The missiles were fired over Lebanon in order to avoid Russia’s S400 system or the possibility that a ground based cruise system would take out America’s boats. 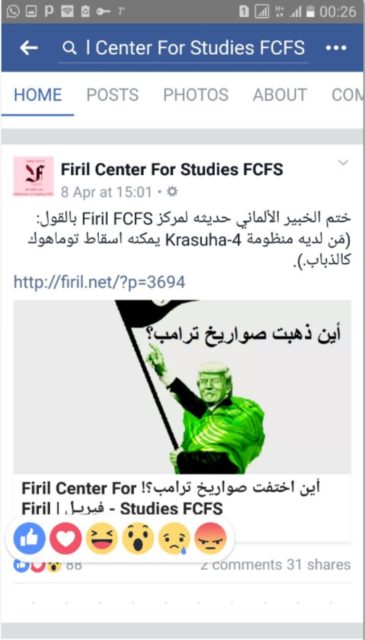 Five missiles fell in the surrounding villages, killing 5 civilians and injuring 20.  Other missiles fell into the Mediterranean where they could be viewed from the decks of the ships that launched them.

Since President Trump ordered retaliation against VT and its staff, partly for our story destroying the White Helmets to a huge international audience and partly to warn us over a blackmail tape issue, there have been changes.  VT is “last man standing.”  We are sitting on a number of stories, but there is a difference between a story and something legitimate.  What is below is legitimate and now confirmed by our own sources inside Syria.

VT contacted the Syrian Ministry of Information regarding the bizarre news that 34 Tomahawk cruise missiles had simply vanished.  VT had even surmised that some may well have been used against other targets, even going as far as to suggest a possible conspiracy to hit Palmyra to aid the ISIS attack there.

A possible confirmation is simply the number fired, 59.  This is what would be required to overwhelm the Russian air defense system based on the number of launchers, both S300 and S400 and other “cruise-capable” systems out there.  Russia would keep their best “in the tubes” for any possible air attack, just in case the cruise missile launch was a lead to empty air defense tubes for a B 52 or similar “big show” raid.

In May 2013, Syria sunk an Israeli submarine.  In 2015, Iraq captured an Israeli general, some claim he was a colonel, and they sent a copy of his ID card to us when I suggested they were making it up.

The real war, what goes on, is very different that what is reported.  Syria, Iraq, Iran and even Russia “under-report” events that would embarrass the US or Israel to the  point of humiliation.  Both sides have had massive failures, kept secret by the other, and many of the stories VT publishes that others don’t are of this order.

VT was, at one time, a “free zone” for publishing deniable intelligence, kind of a safety valve as it were.  Trump ended that when he went after us, and in doing so, used military assets directly against a media platform for failing to carry “fake news,” the new “law of the land according to Trump.”

Before we get into the explanation for the video, I would have a word or two.  Photographs showing the dead from the gas attack are being offered for cash, showing the dead getting back up and walking away.  We can’t verify this but I will mention this is going on.

Past that we are told that Japan is holding a copy of a Trump blackmail tape, and that this relates to the confrontation with North Korea.  If the tape is real, and we have been given the name of the GOP official who has the other copy, someone not well known to the public, then the idea of “Deep State” and blackmail is to be considered.

If this is a conspiracy theory, and it may well be, then Trump was planning this all along, which is my belief.  The tape involves the murder of a minor.  It may well not exist except that when it was offered to us, at a price we can’t pay, VT was taken down by presidential order.

Press TV/Tehran: Since the firing of 59 Tomahawk missiles on Friday against a Homs aerodrome, a question never ceases to return in all analyzes: 23 of the 59 US cruise missiles have reached their target. And the rest of the gear? What happened to 34 other Tomahawks fired from two US warships deployed in the Mediterranean? The reply is the video that Al-Alam is sending this Saturday: the Syrian DCA intercepted and destroyed the 34 Tomahawk missiles before they reached the Shayrat air base.

The information highlights the decree of the Syrian Presidency for the interception and destruction in flight of American missiles at the minute when the attack began. Other analysts note the role of the Russian radars that would immediately take office after the firing of the first missile. Are these S-300 Syrians or Russian S-400 deployed in Syria? Why did you hide this “scathing riposte” and talk about it only two days after the attack?

The video published by Syrian military sources proves one thing: if Syria and its Russian ally avoided publishing it in the hours following the US strikes, it was to avoid an escalation. But in view of the intense campaign of threats against Syria and Russia, there may no longer be any reason to disclose “the weaknesses of the US missiles” and “the power of the Syrian DCA”.

The United States announced this Sunday by the voice of White House  spokesman Sean Spicer not to have warned Russia beforehand of the attack they were going to launch against the Syrian territory. Asked by Fox News, the spokesman said that “we had no contact with the Russian political leaders,” which means that the US did indeed want to “take the Russians short”. But the surprise seems not to have “worked too well”!

Analysts also claim that Russia, whose warships have just returned to the Mediterranean, has shown restraint to avoid a “ballistic war” that could have led to a “nuclear conflict”. 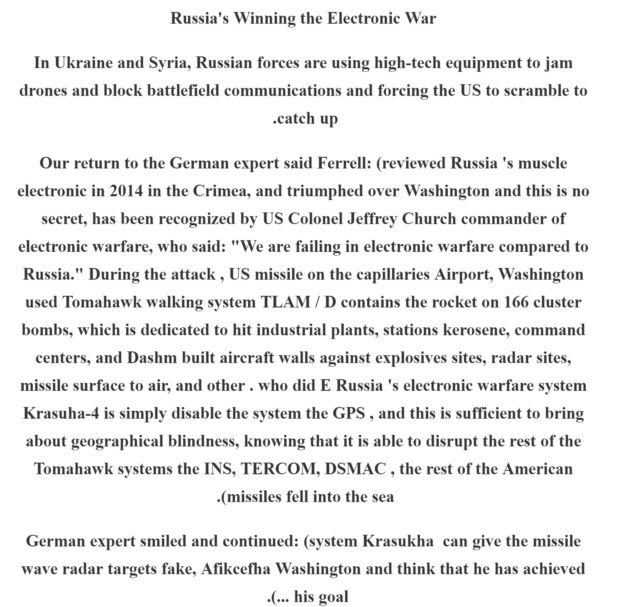