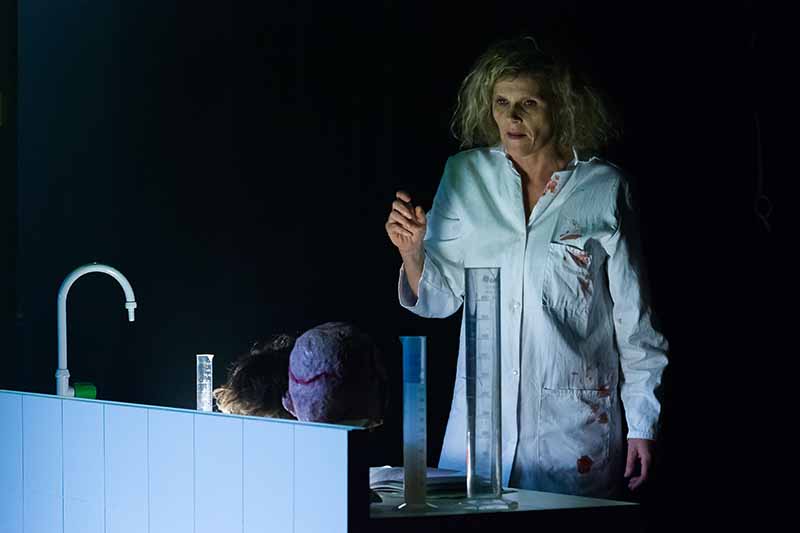 This scary play about the Zombies invading Paris is very intense.   It has the theme of nightmares about Zombies that have been played in movies in recent years. While watching the play with gorry details of blood and people eating others we are tempted to be scared although we know that we were safe as spectators.

To ensure my safety, I went with Alan Abeberry, a philosophy professor,  who attended a Zombie Walk Festival, an annual event, and said he would protect me!

The play “Alimentation Générale” was written by Denis Baronnet and Ronan Yvon and directed by Fréderic Thibault assisted by Pénélope Lucbert. We watched with suspense and saw the horrors of this play which also had some touches of humor as we laughed at the awkwardness of the zombies. These monsters appeared on stage and showed us the bloody details of their predators.  Red blood is the dominant color of this play.  We kept watching attentively with anticipation to see what would be happening.

The story is about a lady named Karen who goes home to find her daughter, Lucie, 6 years old,  in the process of eating her companion Patrick. We learn that Paris is invaded by the Zombies. La Smoule an adolescent and Kahina go to a shelter in the basement of a little food store   As the play progresses we see a lady, Professor Vallet,  from Hospital Bichat in Paris,  who finds an anti-dote for the zombification in her laboratory.  Professor Vallet is very funny.  She is helped by Jacques, a brave man, and former security guard at the hospital.

The objective is not to kill the zombies but to stop them from eating humans.

We watched this captivating play with great interest and feared for the lives of those living under the siege of the Zombies.   The actors and actresses play their roles well.  The cast is composed of Philippe Bérodot, Arianne Brousse, Martin Darondeau, Nathalie Mann, Ariane Mourier and Ghita Serraj.