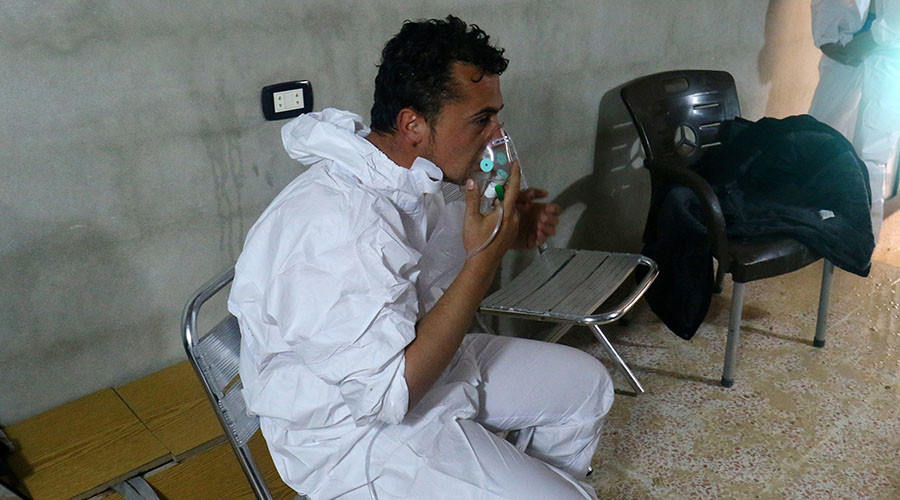 [ Editor’s note:  I received a warning yesterday morning from a ranking member of the Trump team, a general. He told me; “VT is wrong, I know you mean well, we all respect you, but we have slamdunk intelligence that says Russia planned and executed the chemical attack in Idlib.” This is someone I know reasonably well and this talk was going to go downhill, and I might lose a friend.

He went on to explain how surveillance satellites had seen a weapon loaded by Russian technicians onto an SU23. He said the flight was tracked by satellite to Khan Sheikhoun and then back. He also said that surveillance showed that the ordnance was no longer on the plane when it landed, proof of a chemical weapons attack.

At the end of the discussion, things turned to guns, motorcycles and long dead friends. What would never happen, however, is for an American officer to inform the NSC that they are simply making things up.

Now someone a bit smarter than me has gotten their entire report and gutted it line by line. It wont’ make any difference, the MSM is bought and paid for and, as we all know now, has been run by those who run Trump for some time. For those who still care, the truth… Gordon Duff ]

[ Editor’s Note 2: Dr. Postol has as strong a resume in weapons technology that you can find, and maybe a reason why you don’t find someone like him on the NSC.

Theodore Postol is Professor of Science, Technology and National Security Policy in the Program in Science, Technology, and Society at MIT. He did his undergraduate work in physics and his graduate work in nuclear engineering at the Massachusetts Institute of Technology. After receiving his Ph.D., Dr. Postol joined the staff of Argonne National Laboratory, where he studied the microscopic dynamics and structure of liquids and disordered solids using neutron, x-ray and light scattering, along with computer molecular dynamics techniques.

Subsequently he went to the Congressional Office of Technology Assessment to study methods of basing the MX Missile, and later worked as a scientific adviser to the Chief of Naval Operations. After leaving the Pentagon, Dr. Postol helped to build a program at Stanford University to train mid-career scientists to study developments in weapons technology of relevance to defense and arms control policy.

In 1990 Dr. Postol was awarded the Leo Szilard Prize from the American Physical Society. In 1995 he received the Hilliard Roderick Prize from the American Association for the Advancement of Science and in 2001 he received the Norbert Wiener Award from Computer Professionals for Social Responsibility for uncovering numerous and important false claims about missile defenses.

“Going Postol” as now been added to the phrase dictionary

An emeritus MIT professor who challenged the 2013 claims of a chemical attack in Syria is now questioning the Trump administration’s narrative blaming the Assad government for the April 4 attack in the Idlib province town of Khan Sheikhoun.

On Tuesday, the White House released a declassified intelligence brief accusing Syrian President Bashar Assad of ordering and organizing the attack, in which Syrian planes allegedly dropped chemical ordnance on civilians in the rebel-held town.

The report “contains absolutely no evidence that this attack was the result of a munition being dropped from an aircraft,” wrote Massachusetts Institute of Technology (MIT) Professor Theodore Postol, who reviewed it and put together a 14-page assessment, which he provided to RT on Wednesday.

“I believe it can be shown, without doubt, that the document does not provide any evidence whatsoever that the US government has concrete knowledge that the government of Syria was the source of the chemical attack in Khan Shaykhun,” wrote Postol.

A chemical attack with a nerve agent did occur, he said, but the available evidence does not support the US government’s conclusions.

“I have only had a few hours to quickly review the alleged White House intelligence report. But a quick perusal shows without a lot of analysis that this report cannot be correct,” Postol wrote.

It is “very clear who planned this attack, who authorized this attack and who conducted this attack itself,” Defense Secretary James Mattis told reporters at the Pentagon on Tuesday.

Earlier in the day, White House spokesman Sean Spicer also said that doubting the evidence would be “doubting the entire international reporting crew documenting this.”

The report offered by the White House, however, cited “a wide body of open-source material” and “social media accounts” from the rebel-held area, including footage provided by the White Helmets rescue group documented to have ties with jihadist rebels, Western and Gulf Arab governments.

Postol was not convinced by such evidence.

Instead, “the most plausible conclusion is that the sarin was dispensed by an improvised dispersal device made from a 122mm section of rocket tube filled with sarin and capped on both sides.”

“We again have a situation where the White House has issued an obviously false, misleading and amateurish intelligence report,” he concluded, recalling the 2013 situation when the Obama administration claimed Assad had used chemical weapons against the rebels in Ghouta, near Damascus.

“What the country is now being told by the White House cannot be true,” Postol wrote, “and the fact that this information has been provided in this format raises the most serious questions about the handling of our national security.”

On Tuesday, Russian General Staff spokesman Colonel-General Sergey Rudskoy questioned the “authenticity” of media reports concerning the attack. He said that using social media to reconstruct the course of events raised “serious doubts” not only among the Russian military but also “among many respected experts and organizations.”

Rudskoy noted that, under the 2013 agreement to give up its chemical weapons, the Syrian government destroyed its stockpiles at 10 sites that were under its control. This was verified by the Organization for Prohibition of Chemical Weapons (OPCW). However, the remaining two facilities were in territory controlled by the rebels, he said, and it remains unclear what happened to the chemicals stored there.