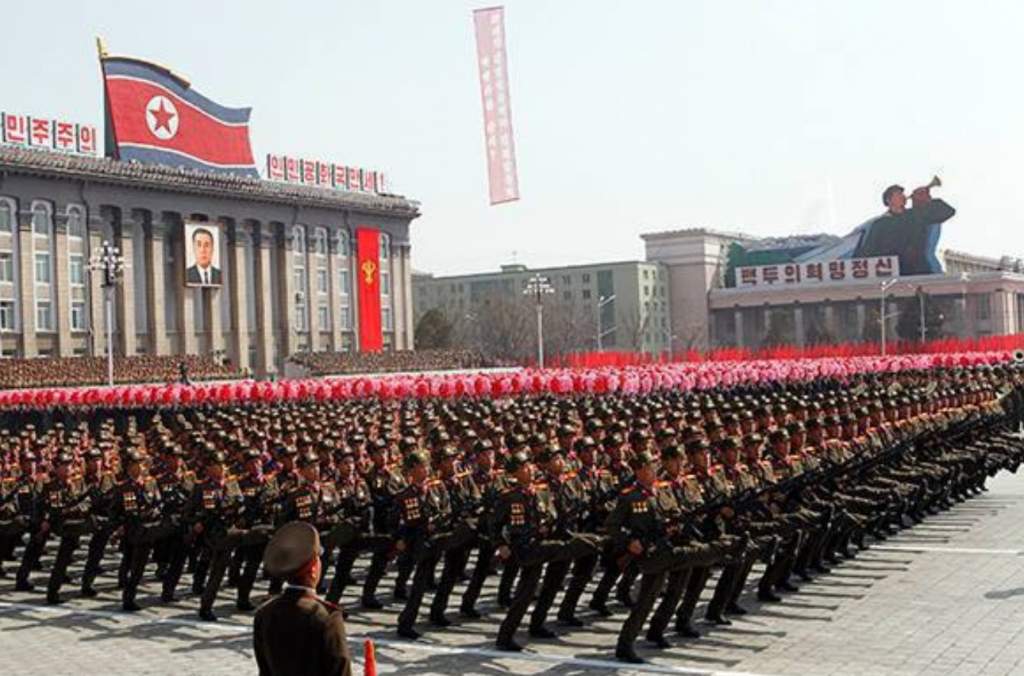 “There is a possibility that North Korea is already capable of delivering missiles with sarin in its  warheads,” the Japanese prime minister said at parliamentary hearings, Reuters reports. Shinzo Abe recalled the infamous sarin attack in the Tokyo subway system from 1995. The attack, conducted by Aum Shinrikyo Japanese sect, killed 12 people.

On April 15, North Korea will celebrate the 105th anniversary since the birth of the founder of the DPRK, Kim Il Sung. This is the largest national holiday in the country, which is called the Day of the Sun. Kim Il Sung is referred to as the “Sun of the Nation” in the DPRK. In the past, North Korean leaders would test weapons on April 15.

Meanwhile, spokespeople for the South Korean Defense Ministry expressed their readiness to show resistance to “provocations of the North,” which may follow in connection with the celebration of the Day of the Sun on April 15. In addition, Seoul does not exclude a possibility of either a nuclear or a missile test on the 85th anniversary of the Korean People’s Army, which the North celebrates on April 25.

Reportedly, the DPRK is prepared for a new nuclear test. According to 38 North U.S.-Korea Institute, commercial satellite images of the North Korean nuclear test site in Phungeri showed activity at the northern terminal, as well as new activity in the main administrative zone and a certain number of personnel around the command center of the test site. The images were taken on April 12.

Against the backdrop of growing tension on the Korean Peninsula, a question arises about further actions of the allies of the two Koreas. According to Japanese media outlets, the USA supposedly considers only two options for the situation to develop: either China increases pressure on the DPRK, or the United States attacks North Korea, should Beijing continue demonstration inaction.

Noteworthy, the US administration welcomed China’s move to abstain fro the voting in favor for the draft resolution of the UN Security Council to investigate the chemical attack in Syria’s Idlib. China made the decision following President Xi Jinping’s official visit to the United States. The White House called the decision a huge diplomatic victory.

In the meantime, Syrian President Bashar Assad expressed his support for the DPRK by sending a telegram to North Korean leader Kim Jong-un congratulating him on the 105th anniversary of his grandfather’s birthday. In the message, Assad calls the DPRK and Syria “friendly countries,” that counteract to “insane ambitions of major powers” whose intent is to subjugate other countries through expansionist and predatory policies.

Russia, for its part, is also monitoring the situation on the Korean Peninsula. On April 11, a group of Russian Navy warships arrived at the South Korean port of Pusan. The official goal of the campaign is the demonstration of the St. Andrew’s flag in the Asia-Pacific region and the further development of naval cooperation with APR countries.

On April 13, commander of the Pacific Fleet of the Russian Federation, Admiral Sergei Avakyants had a meeting with commander of the South Korean Navy, Vice Admiral Chung Jin Sobu. The meeting took place at the naval base of Pusan. The officials discusses issues of international military cooperation between the fleets of the two countries.

In the meanwhile, US aircraft carrier strike group lead by USS Carl Vinson is heading to the shores of South Korea. The group includes a missile cruiser and two missile destroyers.

DPRK officials, commenting on the dispatch of US ships to the Korean Peninsula, declared their readiness to get involved in a military confrontation with the United States should tensions escalate further. “We will take most severe countermeasures against the provocateurs to defend ourselves with the might of our weapons,” spokespeople for the North Korean Foreign Ministry said.

Pravda.Ru requested an opinion about the current development on the Korean Peninsula from Yevgeny Kim, an expert with the Center for Korean Studies at the Institute of the Far East.

“Do you think that a military conflict between North Korea and the USA is possible indeed?”

“I do not think that the Americans are crazy enough to attack North Korea, given the situation that has developed so far. The Northerners can answer. This is not Syria! They will certainly attack US ships and army bases. They have their own missiles for the purpose.”

“What does the South Korean press say at the moment?”

“The South Korean press considers the dialogue between Trump and Xi Jinping most important now. Xi Jinping has just returned from Washington. Yesterday, the Chinese leader had a telephone conversation with Trump. The fact is that Xi Jinping still believes the crisis should be resolved peacefully.

“The Americans may attack first, and then say that it was Pyongyang that attacked them first. They will use it as a reason to strike North Korea. They can do it easily, they have done that before – they started the war in Vietnam that way. They said that the Vietnamese attacked an American destroyer and a cruiser, but in fact it turned out that nothing like that happened, but the USA had already started military actions against Vietnam.

“Let’s remember the year 2013, when a decision was made to eliminate chemical weapons in Syria. ISIL terrorists staged a provocation back then too. They blew up ammo near Damascus and accused Assad of that. The Americans interfered, but Russia came to regulate the problem peacefully. Russia  said that Damascus was willing to destroy all of its chemical weapons.

“The Americans want China to put more pressure on North Korea – not only politically, but also economically. Strengthening economic sanctions against the DPRK could be an option.

“I would also like to pay attention to the recent statement from a representative of DPRK’s Ministry of Defense, who said that the Americans were trying to intimidate Pyongyang with their aircraft carriers, but North Korea would respond to the Americans accordingly. He then added: “We will not move a muscle to the actions of the Americans.”

“What does it mean?”

“North Korea is not going to take an initiative to strike the US aircraft carrier. Those people in Pyongyang are not crazy at all, they know perfectly well what an aircraft carrier is and what it can do. I’m sure that we will not see provocations on the part of North Korea: they do not want a military conflict to happen.”

“Is there any information about the evacuation of Pyongyang?”

“North Korea has repeatedly said before that the country was prepared for a military attack. They say that they can hide all their people in the mountains. I think that they have announced evacuation to be on the safe side, because the Americans are unpredictable.”

“They ordered the evacuation of 25 percent of Pyongyang residents – this is 600,000 people. Is it real?”

“They have mobilization programs in case of war. It can be real.”