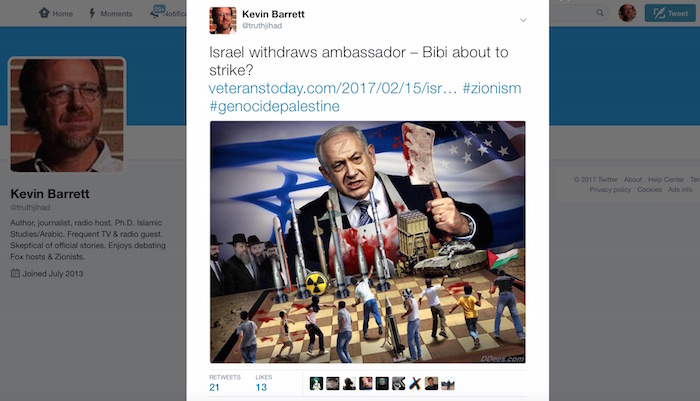 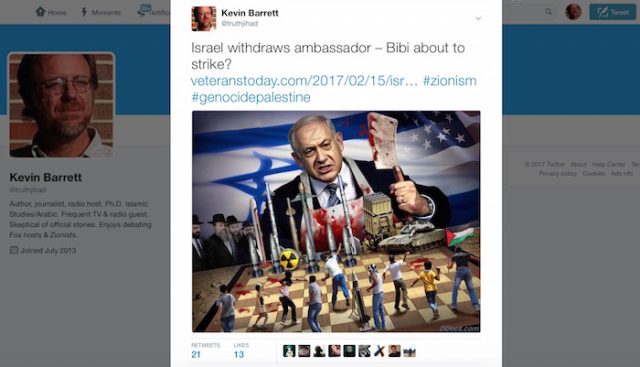 Twitter has asked me to remove the above tweet, due to a complaint from the leading French Jewish group, the Representative Council of French Jewish Institutions (CRIF). Below is a copy of my email correspondence with the Twitter Legal Department.

I most certainly am not going to remove this content. It consists of a brilliant, incisive work of art by David Dees, who is widely viewed as one of the two or three most important (and most-viewed) political artists working today. I am copying him on this email. The art work in question is a passionate protest against the brutal abuse of the human rights of Palestinians by the war criminal leader of Israel, Netanyahu. Many thousands of innocent Palestinian civilians have been slaughtered in repeated assaults on Gaza by the Netanyahu regime, which routinely drops white phosphorus on civilian targets, bombs ambulances, schools, hospitals, refugee shelters and UN humanitarian installations, and refers to these regular massacres of thousands of innocents as routine “mowing the lawn.”

These and other atrocities are committed in order to ethnically cleanse Palestine and purify it as a “Jewish State.” So Dees’ use of the Israeli flag with the Star of David, and the images of rabbis, is entirely appropriate in context, as is the use of the US flag symbolizing US complicity in these crimes. (I am copying Naturei Karta International, a group of anti-Zionist Jews led by my colleague Rabbi Weiss, and will happily take down the content if the Rabbi thinks it is bigoted or inappropriate.) Calling out Jewish-Zionist and American oppressors does not amount to bigotry against Zionist Jews or Americans. Both of these two human groups are powerful in relation to other groups, and both are using their power to horrifically oppress the relatively powerless people of Palestine.

There is no bigotry in siding with the powerless against the powerful. The concept of bigotry is only meaningful in relation to prejudices against relatively powerless, oppressed groups, not powerful oppressing ones. If you start censoring people for “prejudice against the powerful” where will it end? Will we be prohibited from mocking, deriding, deploring, and otherwise verbally and artistically attacking rich people, politicians, CEOs, dictators, ruling classes, celebrities, bullies, and other powerful and privileged individuals and groups?

I will be happy to discuss these issues with representatives from Twitter and/or CRIF, am available between 8 a.m. and 8 p.m. US Central, and eagerly await your call.  I speak fluent French and would love to speak with a CRIF representative en français.

On Apr 13, 2017, at 5:26 PM, Twitter Legal <[email protected]> wrote:
Dear Twitter user,We are writing to inform you that Twitter has received correspondence from the Representative Council of French Jewish Institutions (CRIF), regarding your Twitter account, @truthjihad, specifically:https://twitter.com/truthjihad/status/831876287245463553One of our core values is to defend and respect the user’s voice. Accordingly, it is our standard policy to notify users upon receipt of a request to remove content from their account.  We are notifying you of this request about your account so that you may decide whether or how you will respond. Please let us know (by replying directly to this email) whether you will remove the reported content. Please note that we may be obligated to take action regarding the content identified in the request in the future.For more information on our Country Withheld Content policy please see this page: https://support.twitter.com/articles/20169222If you believe we have contacted you in error, please reply to this email and let us know.Twitter is not able to provide legal advice. You may wish to consult legal counsel about this matter. For more general information on legal requests, please refer to the following Help Center article: https://t.co/lrfaq.Sincerely,Twitter============Reported Username: @truthjihadReporter Username: @Le_CRIFReporter Email: [Redacted]Reported URL: https://twitter.com/truthjihad/status/831876287245463553