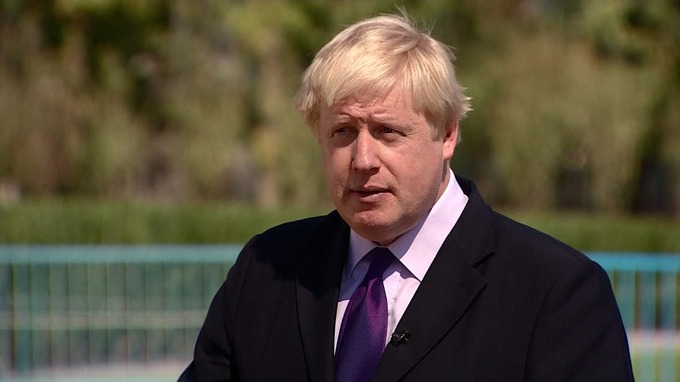 [ Editor’s Note: One of the continuing failures of modern democracies is their addiction to filling top government positions with political hacks and lackeys. Boris Johnson is a perfect case. A sucker for always wanting attention, he thought he would jump out if front by being the “genius” that now, after the gas attack in Syria, to jump on Russia with more sanctions.

A professional diplomat would have consulted some of his colleagues to gauge their reception beforehand. But  Mr.”court jester”, the term used by Tim Farron of the liberal Democrats in Britain, could not stoop to that, so he just made a fool of himself.

He had done this so many times before, and he still got his current Foreign Secretary slot, one can understand that shooting his mouth off would not register as an occupational hazard for him.

It is British Diplomacy and and the British people who suffer having the wrong man in the wrong position at the wrong time. That said, most of the British political structure has been riding the Russian boogeyman horse for some time, motivated by the usual defense contractor expansions that profit the few, and the urge to fantasize being a major world player.

This is insanity. with the British economy on the edge, its social institutions like national health crumbling, the Brexit uncertainties, and the Scots going their own way has not been resisted strongly enough in Britain. The US people have a different, but similar problem with someone’s puppet as President now.

Boris Johnson has reduced himself to a caricature, and the British people need to have him replaced,as they have a Foreign Secretary that is a national security threat due to his being such an airhead. I don’t think I am going overboard here on bit… Jim W. Dean ]

When UK Foreign Secretary Boris Johnson proposed to impose new sanctions on Russia amid the situation in Syria, he hoped to receive an ovation from other EU countries or at least their approval. However, his calculation proved wrong, German newspaper Die Zeit wrote.  Jonson’s initiative was not supported by his European colleagues. Moreover, he rather found himself in isolation.

“Boris Johnson thought his great moment on the global stage had come. The UK Foreign Secretary demanded new sanctions against Russia due to an alleged chemical attack on the Syrian Air Force in the Idlib Province,” the newspaper wrote.

According to Johnson, Russia had “poisoned its reputation” by supporting the Syrian regime, and thus cooperation with Syrian President Bashar al-Assad must have consequences, he argued.

“However, Johnson’s pithy words were not welcomed by his colleagues. Italy, France and Germany in particular were opposed to hasty steps. Italy’s foreign minister, Angelino Alfano, instead called for a dialogue with Moscow, as according to him Russia should not be ‘pushed into the corner,'” the newspaper noted.

In London, Johnson was also hit by a wave of criticism. For instance, the head of the Liberal Democrats, Tim Farron, described Johnson’s behavior as a “failure of British diplomacy” and called him a “court jester,” who is not being taken seriously by anyone.

A commentator for the Guardian newspaper called Johnson the “emotionally neediest of politicians,” who is currently facing a career crisis.

He also had canceled his visit to Moscow, scheduled for April 10, due to the recent developments in Syria having said that his priority was to maintain positive relations with the United States and other countries in the run up to the G-7 meeting.