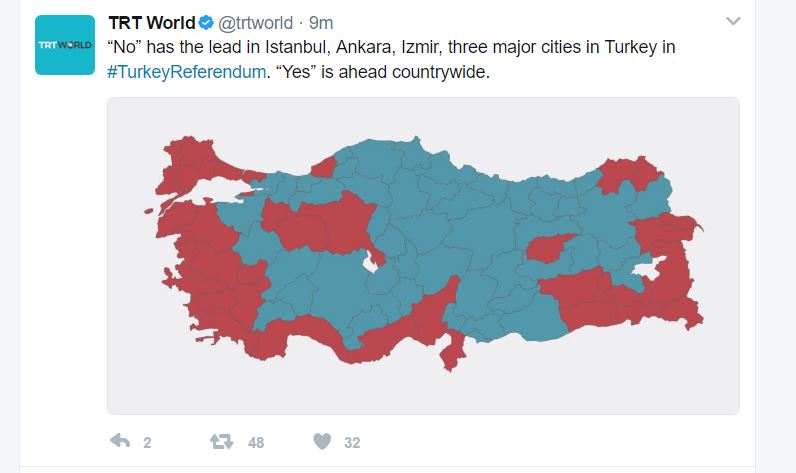 As results are coming in on the Turkish Referendum that would give President Recep Tayyip Erdogan extended constitutional powers, the major cities in Turkey are reporting a lead in the No vote.  ” ‘No’ has the lead in Istanbul, Ankara, Izmir, three major cities in Turkey in #TurkeyReferendum. ‘Yes’  is ahead countrywide,” according to TRTWorld.com on Twitter.

Not surprising, as a vote for the referendum would allow for increased presidential powers that abolish the office of the Prime Minister and replace the existing parliamentary system of government with an executive presidency and presidential system giving the presidency supreme power in Turkey.

According to the New York Times, “Under the new system, the president would have the power to issue decrees, appoint a vast array of top officials and set the national budget, all with limited legal oversight. If Parliament rejects the president’s budget, the previous year’s program would continue with minor adjustments, unlike in the United States where lawmakers can ensure a government shutdown.

“Under the proposed measure, the president would appoint 12 of the 15 judges on the constitutional court, the body with the ultimate authority to scrutinize the legality of his decrees. He would appoint six of the 13 members of the country’s higher judicial authority, which oversees the appointment of Turkey’s 14,000 judges and prosecutors. Three of the rest would be selected by Parliament, making it likely that he and his party would appoint most of the members of the two most important judicial bodies in the land.

“One amendment would even allow the president to order disciplinary inquiries into any of Turkey’s 3.5 million civil servants, said Metin Feyzioglu, the head of the Turkish bar association. This means that the local branch of the president’s political party ‘in a particular town would have de facto power over the public servants in that town,’ Mr. Feyzioglu said. ‘It leads to a total party state.’ ”

The Referendum also has deep impacts on the Turkey’s bid for EU Membership, as if as indicated, Turkey reinstates capital punishment, this will automatically end its EU bid.

Basically the referendum is a consolidation of power at behest of Erdogan after a potentially false coup that may change Turkey from a Western leaning, previously fairly secular democracy to a virtual dictatorship under the leadership of an all powerful political party with its head, an Islamist, that has been rapidly altering laws within the country to move towards a religiously based dictatorial system.

Those in larger Turkish cities seem to recognize this, but will they be enough to tip the vote? And what will the future impacts be on the region, if the Referendum passes or fails? We will learn more tomorrow.