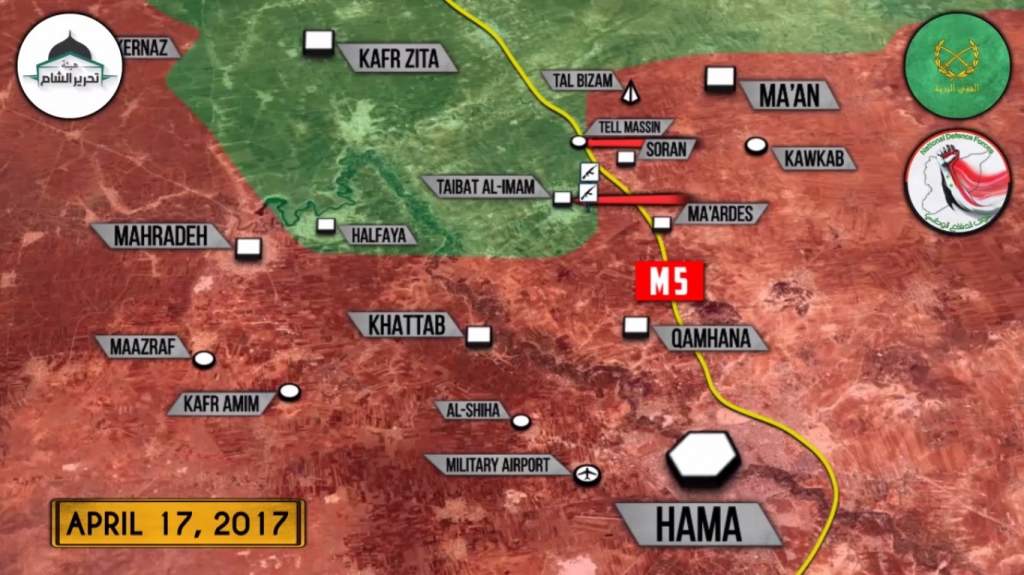 Last weekend, the Syrian Arab Army (SAA), the National Defense Forces (NDF), led by the SAA’s Tiger Forces, recaptured the strategic town of Souran and the Bizam Hill located north of the Ma’ardes village in the northern Hama countryside. The successful advance followed a massive bombing campaign in the area. Over 50 airstrikes reportedly hit militant positions around Souran. Thus, the SAA reversed all gains made by Haya’at Tahrir Al-Sham (HTS) and its allied militant groups last month and reached the strategic M5 highway north of another militant stronghold – Taibat al-Imam.

HTS claimed its fighters had destroyed an SAA tank around the town. Separately, Jaish Al-Ezzah and Jaish Al-Nasser – shelled the Hama airbase with over 40 Grad rockets. The rockets caused a fire and damaged the control tower. Nonetheless, the airbase is still operational and no jets were destroyed.

On Monday, clashes continued in the vicinity of Taibat al-Imam and government forces advanced on Tell Massin. Controlling Tell Massin, the  SAA and its allies will be able to secure a part of the M5 highway north of Taibat al-Imam and to pose a threat to the HTS stronghold from this direction. If the Syrian military command decides to continue operations in the area, it will have two options:

Clashes between the Syrian Arab Army (SAA) and HTS-led forces continued in the Qaboun district in northeastern Damascus. The SAA targeted militant positions with more than 10 heavy rockets and carried out an attempt to advance but without any success. Separately, Ahrar Al-Sham fighters destroyed a T-72 Shafrah tank after it was hit by what appeared to be a heavy IED. The Syrian Air Force bombed HTS and Jaish al-Islam positions in Jobar and Qaboun.

Separately, Syrian warplanes carried out airstrikes against ISIS positions in Raqqah after receiving more info from the Iraqi intelligence. The Syrian Air Force destroyed a HQ of ISIS’ Hesbah (religious police) and the ISIS finance ministry building. Airstrikes also destroyed the ISIS Fatwa council inside Raqqah. Two ISIS commanders were killed. One of them is “Abu Bakr Bin Habib Al-Hakim” a France-Algerian terrorist. He was described as a military leader of ISIS in Raqqah.

The US-backed Syrian Democratic Force (SDF), supported by the US-led collation, are storming the ISIS stronghold of Tabqa west of Raqqah. The SDF had already taken control of the Aeed Al-Saker neighborhood in the western part of the town and the Al-Eskandaria neighborhood in its eastern part. SDF fighters reportedly destroyed 2 VBIEDs and killed up to 30 ISIS members in clashes inside the town.

The SDF also captured the village of Kabash Ghribi in the northern Raqqah countryside. Kabash Ghribi was the second village captured by SDF after the group had croossed the Al-Ray water channel.