According to disinformed sources close to the White House, President Donald Trump, author of The Art of the Deal, has just proven himself worthy of that title: Trump has managed to engineer a straight-up swap sending himself to Moscow to serve as President of Russia. In exchange, Vladimir Putin is flying to Washington DC later today for inauguration as President of the United States.

Even Trump’s former critics hailed Trump’s deal as a stroke of genius. Speaking from her vacation mansion near the Monica Lewinsky Monument in Haifa, Israel, Hillary Clinton told Dissociated Press:

I take back everything I ever said about Donald. He is truly the greatest negotiator ever. I can’t imagine how he talked the Russians into this.”

Geopolitical experts and ignoramuses alike agreed that Trump’s brash and brilliant move will undoubtedly make America great again. “We’ve been suffering from abysmal leadership here in Washington for decades,” said Stephen Stunk of the think tank American Policy Experts (APE). “Meanwhile, Russia has revived itself from its catastrophic collapse under Yeltsin thanks to the firm and competent leadership of Vladimir Putin. We needed a leader like that, and Trump has just gotten us one.”

Billionaire currency manipulator George S. of the Soros House of International Trade explained: “When another country has a resource you need, what do you do? You trade for it. And you drive a tough bargain. By landing Putin for America, Trump has cut the deal of the century.”

Experts agreed that getting some competent leadership for a change wasn’t the only advantage of Trump’s trade deal. By sending himself to Moscow as the new head of the Kremlin, they explained, Trump has essentially destroyed Russia’s soaring reputation and torpedoed its prestige and credibility, all without firing a single shot.

But why did the Russians accept Trump’s offer? One theory is that Putin, even while serving as the President of the USA, may still harbor a sentimental attachment to Russia. Some expect him to pursue “pro-Russian” policies that are also good for America, such as opposing ISIS rather than funding and arming them.

A few conspiracy theorists and disgruntled former Trump staffers, however, think something more nefarious is afoot. Steve Bannon, Trump’s disgraced and demoted former top advisor, has been taking Twitter potshots at Trump from his unheated closet in the White House basement. 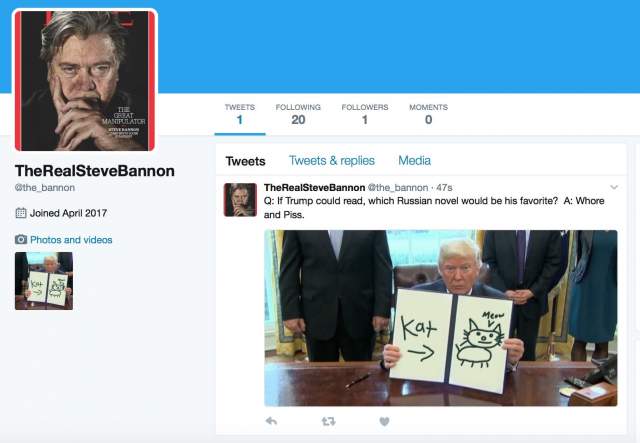 Oleg Erovinkin – the only source who could confirm Bannon’s theory – could not be reached for comment.