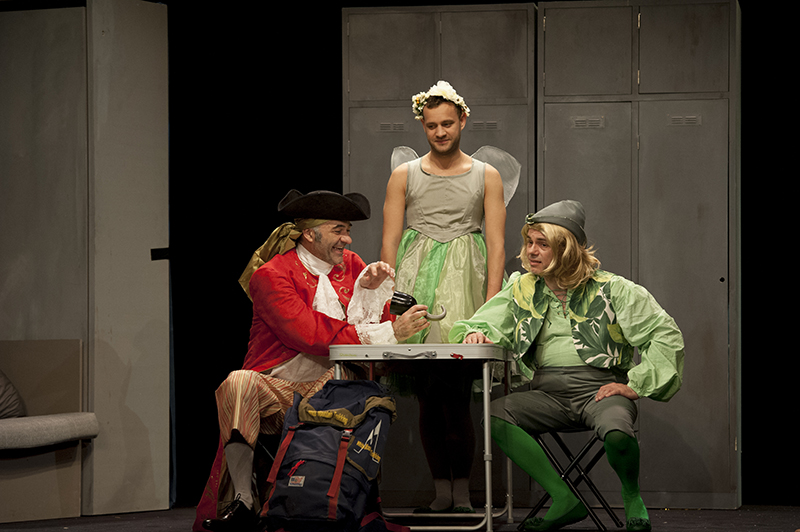 In today’s the world with terrorism and violence, it is very relaxing to see this  play “Un Monde Marveilleux”  a  hilarious comedy  written by Didier Caron and Eric Laborie directed by Eric Laugerin which is playing at Théatre Le Splendid in Paris. The play is a based on Peter Pan of which the stage play Peter Pan  first premiered in London on December 27, 1904. The name Peter Pan comes from Peter Llewelyn Davies ,one of the boys that the author of the original play, Mr.Berie took careof – Peter the boy’s first name  and Pan the mischievous Greek god of the woods. Some believe Mr. Berie created the play to comfort his mother after his brother David died   in a skating accident. Peter Pan  was the boy who never grew up and  his brother David likewise did not grow up. The play Peter Pan has been a big success in theaters internationally for many years and has brought pleasure both to children and adults.

“Un Monde Marveilleux” is a hilarious  play about a cast rehearsing for a play but doing a very bad job of it!

This comedy  is about four losers  who are employed by an American style amusement park  near Paris,Magic Land, near Paris.  The actors and actress  are enthused about acting in the play and say it is their dream to produce the play.  They  have to live at the amusement park. These losers try to act their roles but make so many funny mistakes both  in words and actions. The audience laughs from beginning to end.  It is 90 minutes of laughter both for children and adults. Un Monde Merveilleux is a whimsical fantasy which transports us to a new world free of cares and worries.  We enjoy watching the cast make so many mistakes we laugh at.

The fairy Tinkebell a very funny transvestite , played by Jordan  Mons is a very cute fairy who uses his wings well but does not know when to go onstage. He enters at the wrong times. It is very funny.

Peter Pan another unsuccessful actor played by  Vincent Varnier is very amusing and enchants us.

Gilbert Martin played by Simon Charasson  the first visitor to the amusement park is an amusing who adds to the humor when he joins the group.

The director  Chistopher , played by  Mathieu Wilheim tries to get them to improve their performance. Captain Hook keeps telling the princess she has to talk but says the word for leave (parte) instead of the word for talk (parle) in French. The audience laughs.

The costumes are just fantastic:the fairy with his wings, Princess Lily in Indian dress, Captain Hook with his captain’s hat and famous hook and of course Peter Pan with his  green and brown outfit that looks like he comes from the woods.

All the cast make mistakes and Christopher makes them repeat their words and actions;

The cast feels young and that they are in a magical world – a fantasy land  where they  send  good feelings to the audience. We feel that we are in a marvelous world.


Tickets to this play can be purchased at a good discount through a site called www.billetreduc.com  at  prices as low as 12 Euros.  It is playing  on Tuesdays and Wednesdays until May 24, 2017.