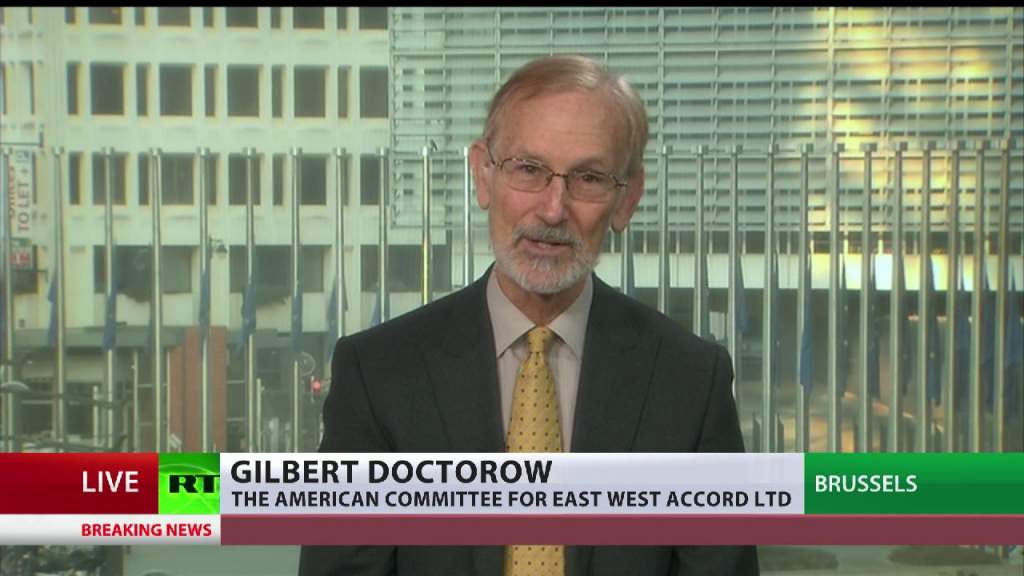 From 1998-2002, Doctorow served as the Chairman of the Russian Booker Literary Prize in Moscow. He is a co-founder and European Coordinator of the American Committee for East West Accord Ltd. based in Brussels. He is the author of the new book Does Russia Have a Future?

Jonas E. Alexis: Trump has been desperately trying to justify perpetual wars in the Middle East, and so far he hasn’t come up with a rational defense as to why he is continuing to bludgeon American men and women to death in the Middle East. The only solution he has fleshed out so far is this: “Our military is building and is rapidly becoming stronger than ever before. Frankly, we have no choice!”[1]

Obviously Trump has viewed his supporters as losers, jackasses, and idiots who were too dumb to realize that Trump was slowly leading them into the Neocons’ diabolical hands. The Neocons get their orders essentially from the Israeli regime, which has think tanks and magazines virtually all over America, including the American Enterprise Institute, Commentary, Weekly Standard, National Review, etc.[2]

Trump is losing moral, political, and intellectual grounds among intellectuals and analysts, and one of them is none other than Gilbert Doctorow.

You have recently argued that Donald Trump has progressively become “an integral part” of the New World Order ideology. “And with his bigger than life ego, petulance and stubbornness, Commander-in-Chief Trump is potentially a greater threat to world peace than the weak-willed Barack Obama whom he replaced. Trump has ignored Russian calls for an investigation into the alleged chemical gas attack in Idlib province before issuing conclusions on culpability, as happened within hours of the event.” Expand on that for us here.

Trump as part of the problem

Gilbert Doctorow: Very often consistency of thinking is regarded as a positive value. However, in my view, following the facts is a greater virtue.  When the facts before me change, yes, I change my political stand, without any sense of embarrassment.

The record is clear: I was a supporter of Donald Trump from early in the primaries, straight through the election, although, at one point or another, I was taken aback by some of his policy statements on domestic issues and by some of his appointments to his entourage.

But I kept my eye on the one ball that counted for me: Trump’s insistence that the United States must stop interfering in the internal affairs of other countries, must desist from regime change and must seek good relations with all countries, whenever possible so as to concentrate on rebuilding its infrastructure at home. That was as close a definition of détente as I needed to vote with my feet and with my pen.

I publicly defended Trump’s integrity and moral compass based on what I had heard about him for two decades from a former business partner and close friend who became his Public Relations Manager. By defending Trump, I found myself odd man out among nearly all of my peers, meaning well educated and self-consciously decent people. Whether on the Right or on the Left, they all condemned Trump as crude, psychologically unbalanced, sexist….you name it.

It came as no surprise to me that the Republican Club of my alma mater, Harvard University, disowned Trump, the candidate. This was a first of its kind for these worthy gentlemen.

When Trump, the President from his first days in office came under violent attack from the still Democratic Party and the McCain hardliners of the Republican Party, when he was vilified daily in mainstream media for being an illegitimate president put in office only thanks to Russian hacking and meddling, when he was effectively accused of treason for collusion with the Kremlin against American interests and one or another of his aides was being hounded for having shaken the hands of Russians along the way to the presidency, I stood up for him and praised his identification of neo-McCarthyism in the behavior of his enemies.

I condemned our intelligence agencies, the CIA, the NSA, the FBI for leaking disinformation about Trump and for working hand in glove with the mainstream media to bring down Trump, precisely over the objections of the Deep State to his plans for redirecting American foreign policy away from permanent war and towards global stability.

However, when Donald Trump finally caved in to all this pressure and abandoned his advisors and his policies to curry favor with the Neocons, the Liberal hawks, CNN and MSNBC, when he launched his cruise missile attack on Syria last week, the facts before me changed 180 degrees and I am obliged to do a volte-face, as well.

One of my niche specialties developed over the past year has been both to follow very closely and also to participate in Russian domestic television, in particular their political talk shows. One of the most colorful personalities in that medium is the leader of the ultra-nationalist LDPR party in the State Duma, Vladimir Zhirinovsky.

Zhirinovsky was from the summer of 2016 and up to a week ago a very vocal defender of Donald Trump before the Russian elites and general public. But he also follows the facts, and after a brief time-out to reformulate his position, he appeared on Russian state television a few days ago announcing that he stands ready to drink a flute of champagne and celebrate the coming impeachment of Trump. I share the sentiment.

Jonas E. Alexis: In your recent book Does Russia Have a Future?, you’ve stated that “America’s conduct of foreign relations remain enthralled to Neocon ideology. Only when this false religion is dispatched can the U.S. begin to address lost opportunities with Russia…and with many other powers as well.” How should the Neocons be dispatched?

Gilbert Doctorow: Dispatching the Neocons, and not only Republican Neocons but also the Democratic Party Liberal Interventionists who share virtually all the same policies, means a lot more than the removal of Victoria Nuland and several dozen like-minded Cold Warriors at the State Department and the Pentagon, as happened in the days following Trump’s inauguration.

That was a good start, but it did not strike at where the Deep State is at its most threatening to political control of policy by our elected officials, namely the intelligence agencies, which have been politicized to an unacceptable degree going back to purges conducted by then Vice President Dick Cheney after 9/11 and in the run-up to the invasion of Iraq.

The arrogance and irresponsibility of these agencies follows directly from their abuse of electronic surveillance and ability to blackmail everyone in the country, right up to the President of the United States. They need and deserve a massive cut in staff before they can be rebuilt from scratch in a professional manner.

Then there are the many regime change, i.e. certifiably Neocon programs which are U.S. government financed under the guise of being NGOs. Here we have Freedom House, the National Endowment for Democracy and similar outfits which must be closed down without any further ado because their stock in trade is precisely what Donald Trump promised to end: meddling abroad. Indeed, their work is worse than that: they have been receiving taxpayer money to influence the U.S. public in ways that have undermined all initiatives at diplomacy and constructive engagement with Russia, with China. For more than a decade they have released to our servile press cooked-up, fraudulent documents nominally signed by respective freedom fighters and intended to promote conflict. In my book Does Russia Have a Future? I detail extensively several such cases.

However, let us go back to Psychology 101: a cat behaves like a cat because it has a cat’s body.  The United States behaves as the world gendarme and acts out Neocon dreams because it has military bases in more than 70 countries around the world that draw us into all local or regional disputes and allow our military to claim that we have strategic interests since our bases and personnel may be under threat by one or another faction in these local disputes.

This needless and extremely expensive presence all across the globe must be cut back radically if we are to free ourselves from the Neocon and Liberal Interventionist mafia that controls our government in Washington. The side benefit will be to free up a large part of our present $600 billion military budget for reallocation to home needs.

[2] For a recent article on how the Neocons are still asking for a surgical strike in Syria and other places, see Michel Paradis, “Bombing for Show,” Commentary, April 17, 2017; “‘Demonic destiny’: Long history of US threats to N. Korea,” Russia Today, April 17, 2017.