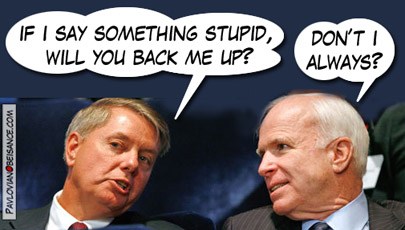 We all know that Lindsey Graham is an Israeli puppet.[1] He and John McCain are obviously competing against each other: they want to win Israel’s best puppet award. And in order to do that, they want to kill and destroy for the regime. The Middle East is too small for them, so they are currently spreading their essentially diabolical plan to other territories such as North Korea.

Last March, McCain called Kim Jung-un “a crazy fat kid.”[2] Graham responded by saying that he could do better. When Graham was asked the question, “Would you be for a preemptive strike [against North Korea]?,” he responded:

This man doesn’t even reflect on untold misery a war with North Korea would bring. He doesn’t even care about the historical record and recent debacles in Iraq, Afghanistan, Libya and Syria. Even if you place incontrovertible statistics in front of him, that still wouldn’t move him because he is bound by an Israeli contract, which basically says that reason has to be abandoned in the political landscape and must be replaced by Israeli agendas, which are always in conflict with practical reason. Graham only wants to see blood virtually everywhere on the planet because that is what the Israeli ideology dictates.

But the Israeli regime is reversing that policy: they are telling Washington to police virtually every single country in the Middle East and now North Korea. It was Benjamin Netanyahu who said back in 2015 that

“Both Iran and North Korea are governed by ruthless and extreme dictatorships, states that seek to bully and intimidate their neighbors, and in our case, to actually eradicate us from the face of the Earth. Iran and North Korea have aggressive military nuclear programs and they are both developing nuclear weapons and the means to deliver them, ballistic missiles. We’re just ahead of a new era of accurate missile and unconventional weapons in the hands irrational people.”[4]

The plot thickens: Lindsey Graham, John McCain and the Trump administration are provoking a war with North Korea and Iran because it is good for Israel, not the American people. In fact, it was Sheldon Adelson who donated at least $5 million to Trump’s inauguration.[6] Adelson is the guy who advocated that the US should literally “drop atomic bomb on Iran.”[7]

Adelson is also the man who was accused of spreading prostitution and other moral corruptions in China.[8] He was even accused of “a range of lurid allegations involving Chinese triads, bribery, and criminal activity.”[9] But this is the kind of people that politicians in Washington are associating with. According to Adelson, negotiation, dialogue and diplomatic solutions with countries like Iran are “a sign of weakness.”[10] Washington again is just following the Israeli regime and Sheldon Adelson by provoking both Iran and North Korea.

By March of this year, the Israeli regime has stated that North Korea is actually “a larger global threat than Iran.”[11] Defense Minister Avigdor Liberman said: “North Korea stands at the top of the priority list” and “seems to have crossed the red line with its recent nuclear tests.”[12]

Hasn’t Israel crossed the red line by piling up hundreds of nuclear weapons in their basement? Well, that is a question that Liberman will never answer precisely because it would ruin his essentially Talmudic ideology. What Liberman is actually looking for is what Jewish Neocon Michael Ledeen himself has termed “creative destruction.” Ledeen declared:

“Creative destruction is our middle name, both within our own society and abroad. We tear down the old order every day, from business to science, literature, art, architecture, and cinema to politics and the law. Our enemies have always hated this whirlwind of energy and creativity, which menaces their traditions (whatever they may be) and shames them for their inability to keep pace.”[13]

Both Lindsey Graham and Donald Trump are helping the Israeli regime to bring “creative destruction” in the Middle East and Asia. We must not let that happen. The American people and much of the world have every right to say no more for Israel.