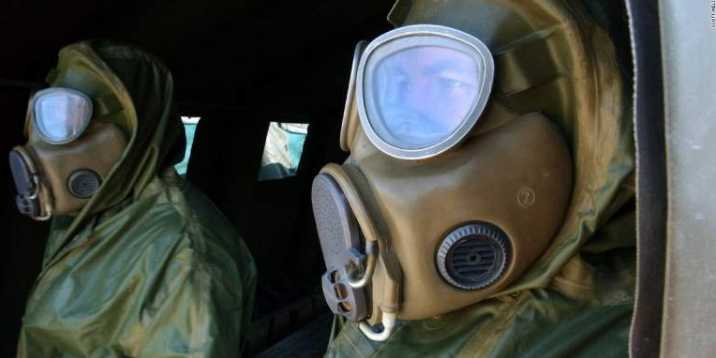 Dear Readers, This Debate show interview was a casualty of the website hacking and did not get up earlier… JD

[ Editor’s Note: It was good fortune to catch a guest slot on such an important news story like this. And, as fate would have it, the other guest’s studio had technical difficulties, so I ended up with the whole show, a first; and it was wonderful to have that much time to dig into another US situation, where goosed Intel was used to justify a quick strike.

Some testy phone calls were had between VT and some long time old friends, who are now ranking brass in the Pentagon. They claimed we were just wrong, that they have solid proof that Assad did it; and we claimed that their proof was a bad joke, that once again they were just going along because it was a top-down decision, and they did not want to get in front of that steamroller.

There is no greater treason for a President and his Military and Intel command than to take the country to war on fake intelligence. The US has a long record of doing that, long proven, so that is carved in stone. But the Command thinks that it should have no effect on their credibility, in this situation.

When we got into the question of what would Assad’s motive be to do something like this at this point in the war, when he is winning, they had no answer. Not even the US media and Congress have asked this reasonable question – a dead giveaway that they want to keep that off the discussion list. Those involved in this who have taken the oath, have broken it, following those who have done it before them, as no one paid a price for it. It is a sad day for America… JD ]

The United States has recently launched a cruise missile attack against a Syrian army base in Homs Province in response to an alleged gas attack that killed over 80 people in the town of Khan Shaykhun, Homs Province. Washington has pointed the finger of blame at the Damascus government for the Idlib tragedy, without proving any proof to support its claims.

Syria has denied any role in the purported chemical attack, with President Bashar al-Assad calling for an impartial investigation into the deaths in Khan Shaykhun. To discuss the issue, Press TV has interviewed Jim W. Dean, managing editor of the Veterans Today from Atlanta.

Dean rejected Western and militant claims that Damascus had been behind the purported gas attack, saying there is no need for Syria to place itself under international scrutiny at a time its armed forces hold the upper hand on the battlefield against foreign-backed Takfiri terrorists.

“There’s absolutely no feasible motive why [President] Assad would use weapons like this at this time when he’s got conventional weapons” and the Russians are providing “strategic” and “accurate” air cover to Syrian army operations, said the analyst, stressing, “It would be the worst possible thing for him to do.”

Dean further said “this whole thing (the Idlib attack) was really concocted to try to stop the momentum of the current counterattack in Hama,” adding that Syrians are winning the war and President Assad “isn’t going to cave in by the demands” of the armed opposition.

He also highlighted Russian President Vladimir Putin’s earlier warning that some terrorist groups are plotting to carry out false-flag chemical attacks and put the blame on the Syrian government.

Dean pointed to the role of Turkey in providing terrorists with toxic arms, saying, “The Turks have been helping them and they’ve been able to ship them (arms) all the way to the [terrorists] in Mosul to use with no problem whatsoever. They could not do that without the help of their Western and [Persian] Gulf state supporters.”

The commentator criticized US officials for leveling unfounded allegations against the Syrian government, while they are fully aware of the facts and figures on the ground, noting, “They cannot of course put anything on the table to show it.”

The United States has been aware of the fact that two out of three chemical facilities in Syria have been under control of terrorists but the American authorities have been pretending that they knew nothing about this issue, he argued.

In an exclusive interview with AFP in Damascus on Wednesday, Assad asserted that the suspected chemical weapons attack in Khan Shaykhun was a “fabrication” to justify the subsequent US military strike on Syria’s  Shayrat air base in Homs Province.

The Syrian leader assured that his government had handed over all its chemical weapons stockpiles in 2013 and thus could not have been behind the Khan Shaykhun incident.