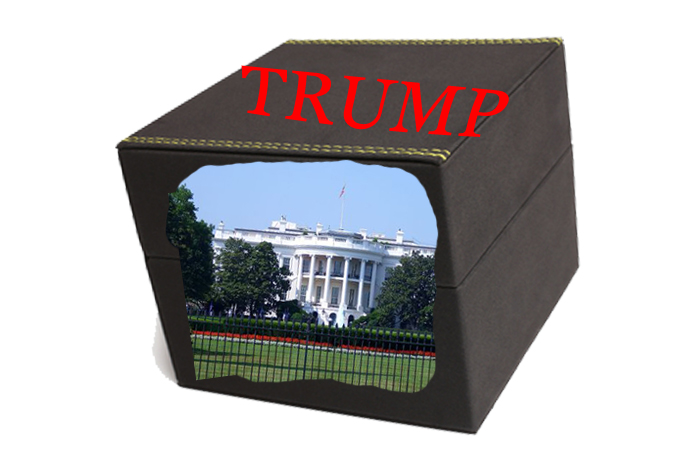 As the US continues on its path towards darkness through the shuttering of transparency including the White House visitor logs, source relationships between the media and FBI as well as potentially other agencies and even closing the sidewalk in front of the White House to protesters and the public,  we should consider a different color for the White House, black.

The White House is becoming a black box that soon will be so tainted in secrecy and lack of transparency, that this government will indeed compare to those insidious ones in foreign countries, the ones that we once fought against.

It is clear why Trump and his handlers made the call to congratulate President Recep Tayyip Erdogan of Turkey, after what should have been a criticized, disputed referendum due to concerns made by Organization for Security and Cooperation in Europe (OSCE) election monitors. Perhaps the US is no longer against voter fraud, including that which may have tipped the scales towards a consolidation of power in our NATO ally, Turkey. What had been a fairly secular, democratic state in the Middle East, even a contender for EU membership, is an “anti-terrorist partner” with terrorist ties,now turned virtual dictatorship.

With a potential Turkish false coup that consolidated power, both guilt and blame were inflicted on the US through Turkey’s fake use of the Gulen Movement meme. This furthered the operational goals of a regime intent on supremacy in the Middle East, and one that may indeed have the arms of an octopus to cells in Europe as Turkish groups have migrated by the thousands to EU member states, including an estimated 3 million Turkish people now living in Germany. Why are Turks moving into Europe as refugees move into Turkey?

Is Europe being blackmailed with terror to accept Erdogan’s legitimacy?

What about Russia? Why allow a country that clearly has its own intentions in Syria, has supported ISIS through weapons transfers, oil purchases and trafficking to purchase a missile defense system? What if Turkey goes completely rogue?

Trump has the lowest approval rating of an US President in the first 100 days. According to Gallup. “Donald Trump averaged 41% job approval during his first quarter as president, 14 percentage points lower than any other president in Gallup’s polling history.”

With so many conflicts of interests,  one has to wonder, who deems this mute and why?

Based on who and what he is supporting, the darkening of civil liberties, environmental protections, foreign policy – a virtual press free State Department, lack of transparency and support for what could be seen as radical dictatorships, perhaps it is time to call a spade a spade. We are witnessing a move towards a dictatorship in progress in the US.

Are we going to allow this? Who put a target on America?

The enemy is not Iran as Secretary of State Rex Tillerson said recently. Iran for the most part has been operating with permission from sovereign governments in Syria, Lebanon and potentially even in Yemen.

What permission does the US have to operate in Syria? It is clear that false causes can easily be attributed to the Iraq War and the many other conflicts in the Middle East as well as the terrorist proxies we supported. These proxies were foreign backed by Saudi Arabia, Qatar, Turkey and Israel for destabilization of the sovereign countries they invaded.

Perhaps we should review the word terrorism.

Terrorism is defined as the unlawful use of violence and intimidation, especially against civilians, in the pursuit of political aims.

What have these proxies we have supported been doing? Scattering chocolate to hungry kids before they blow them up?

As America closes down its transparency, institutions, protections for its citizens, supports dictatorial regimes and terrorist proxies, have the terrorists become so clear that they can finally be outed?

Since 9/11 and the fraudulent, illegal wars that followed, there has been a thick veil that has slowly worn down occluding the terrorists. This veil of believably is the war narrative dictated by an embedded Main Stream Media.

Today in 2017, the veil has eroded to what, when factually laid out, appears as a pure fabrication, no wonder they are turning the White House into a black box.